Marks for Effort is the twelfth episode of season eight of My Little Pony Friendship is Magic and the one hundred and eighty-first overall.

In this episode, the Cutie Mark Crusaders try to convince Twilight Sparkle to let them into the School of Friendship, even though it's clear they've already mastered the curriculum.

According to episode writer Nicole Dubuc, this episode was written at the same time as Molt Down, and the background used for the "shouting closet" in Molt Down was deliberately written into this episode's outline by Dubuc and Josh Haber.[1]

The episode begins with the Cutie Mark Crusaders sneaking around outside the School of Friendship classrooms. Bored with Miss Cheerilee's plain lessons at the Ponyville Schoolhouse, the fillies wish to take part in the more fun and exciting classes being taught by Twilight Sparkle and her friends, including cupcake sharing with Pinkie Pie, animal-frolicking with Fluttershy, and buckball with Applejack.

During her lecture about Chancellor Puddinghead, Twilight notices Apple Bloom, Sweetie Belle, and Scootaloo sitting amongst her students. She takes them into the hallway, where guidance counselor Starlight Glimmer briefly appears bored from having no students to counsel. Twilight refuses to let the Crusaders enroll at the School of Friendship because they already know all about friendship and regularly help ponies in need.

Despite this, the Crusaders are determined to prove that they still have a lot to learn about friendship and deserve to be students at Twilight's school. To this end, Apple Bloom intentionally shirks her farm chores at Sweet Apple Acres, Sweetie Belle pesters Rarity with her constant begging at Carousel Boutique, and Scootaloo disguises herself as a student in Rainbow Dash's class. When these methods all fail, the Crusaders pretend to get into an argument in front of Pinkie Pie and Fluttershy, but this also fails when they accidentally stop pretending.

Back at their clubhouse, the Crusaders discuss different ideas for trying to get into the School of Friendship. Just then, they hear crying outside and notice a young filly in tears sitting next to a nearby tree. When they approach and ask what's wrong, the filly introduces herself as Cozy Glow and explains she is having trouble with her School of Friendship lessons, having just recently moved to Ponyville. The Crusaders offer to help Cozy Glow with her schoolwork, believing that doing so would be just as good as being in Twilight and her friends' classes.

Cozy Glow's homework assignment is to do something nice for three ponies around town. With the Crusaders' assistance, she helps Bon Bon protect her face from the spines of a cactus she just purchased, gives color-coded sprinkle shakers to Mrs. Cake, and does Big McIntosh's chores for him so that he can spend time with Sugar Belle. Some time later, Cozy Glow meets the Crusaders outside the Ponyville Schoolhouse and excitedly announces that she got an "A" on her homework. Happy for Cozy Glow, the Crusaders wish to do more for her, and she mentions that she has a big friendship test at the end of the week. She asks the Crusaders for help studying, and the Crusaders eagerly agree.

Over the course of the next several days, the Crusaders teach Cozy Glow about the values of friendship such as generosity, laughter, kindness, honesty, and loyalty by painting the Apple family barn, helping Fluttershy feed her animals, and retrieving Pipsqueak's kite. When classes are dismissed at the end of the week, however, Cozy Glow tearfully reveals to the Crusaders that she failed the test, and Twilight angrily calls the Crusaders to her office.

In Twilight's office, Twilight scolds the Crusaders—who Cozy Glow said were her tutors—for teaching her the wrong things about friendship and intentionally making her fail. The Crusaders insist they were teaching Cozy Glow all the right things, but Twilight shows them Cozy Glow's test paper with nothing but incorrect answers. Because of what she perceives as the Crusaders' cruel and spiteful prank, Twilight bans them from her school and from having any further communication with its students. As the Crusaders leave, Cozy Glow watches from afar in shock and regret.

Cozy Glow goes to Starlight Glimmer in her office for advice. She reveals that she failed her test on purpose so that Twilight would see that the Crusaders are bad at friendship and allow them to attend the school. Starlight says that, despite Cozy Glow's actions, her intentions were pure, and she also mentions that the Crusaders would make better teachers than students. When Cozy Glow asks if there is a place for the Crusaders at the school after all, Starlight gets an idea.

At the Ponyville Schoolhouse, the Crusaders and their classmates spend the day cleaning the classroom. As the Crusaders wonder how Cozy Glow failed her test and why Twilight blamed them for it, Starlight Glimmer suddenly enters and asks Cheerilee if she can pull them away from cleaning for something else.

The Crusaders are once again called into Twilight's office at the School of Friendship, where the rest of the Mane Six also appear. The fillies fear even more scolding and punishment, but Twilight says they were summoned for a different reason. Cozy Glow admits to what she did and apologizes to the Crusaders for getting them in trouble. Because the Crusaders succeeded in teaching Cozy Glow about the values of friendship, Twilight and her friends give them honorary diplomas and declare them official School of Friendship graduates.

As the Crusaders celebrate their own "graduation", Starlight Glimmer offers them positions at the school as friendship tutors, which they happily accept. As Twilight commends Starlight on her guidance counseling, the Crusaders leave to tutor more students in friendship, with Cozy Glow following close behind.

Applejack: Apple Bloom! You know better than to leave our good tools out like that! And aren't you supposed to be on harvest duty right now?
Apple Bloom: Eh, it's not like the apples are goin' anywhere.

Rainbow Dash: I never told that story to my students before. Scootaloo!
Scootaloo: [laughs nervously] Never met her.

Cozy Glow: I'm Cozy Glow. It's very nice to meet you, but I don't know if I'll stay long. I'll probably flunk out. I'm having so much trouble with my friendship lessons.
Cutie Mark Crusaders: [gasps]
Sweetie Belle: We can help with those!
Scootaloo: We know all about friendship!
Apple Bloom: And studyin' with you would be almost as good as bein' in class!

Sweetie Belle: Not even Miss Cheerilee can make the history of radishes exciting.

Twilight Sparkle: I know you're upset that I won't let you come to my school, but to teach Cozy all the wrong things out of spite... That's just cruel!
Sweetie Belle: But we taught her all the right things!
Twilight Sparkle: Then how do you explain these friendship test answers? [reading] "What are the six Elements of Harmony?" Five turtlenecks and a cheese grater? "Who is the Princess of Friendship?" Your mom?

Scootaloo: [sighs] I still don't get how Cozy failed her test after all that studying.
Sweetie Belle: Or how Twilight could blame us for it!
Apple Bloom: Or how gum can be so sticky!

Applejack: They're honorary diplomas, makin' y'all official graduates of this here school.
Rarity: You've more than earned them.
Rainbow Dash: Without even having to study! 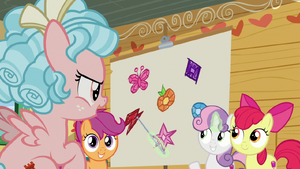