My Little Pony Friendship is Magic Wiki
Register
Don't have an account?
Sign In
Advertisement
in: Pages suggested for renaming, Pages that need improvement, Earth ponies,
and 2 more
English

Not to be confused with Masquerade.

She first appears in The Best Night Ever as a guest at the Grand Galloping Gala. She is one of several chorus singers in At the Gala.

In Sweet and Elite, S01E26 Unnamed Earth Mare #1 appears several times during Becoming Popular (The Pony Everypony Should Know) and at the Canterlot Garden Party. She stands beside Sealed Scroll at the beginning of Hearth's Warming Eve, and she attends both wedding ceremonies as well as the reception in A Canterlot Wedding - Part 2.

In Princess Twilight Sparkle - Part 1, S01E26 Unnamed Earth Mare #1 appears in the crowd panicking to Twilight when Princess Celestia and Princess Luna disappear. She appears in Maretropolis in Power Ponies, at Fashion Week in Rarity Takes Manehattan, at the Ponyville Days festival at the end of Simple Ways, in Sweetie Belle's dream in For Whom the Sweetie Belle Toils, in the stadium crowd in Equestria Games, and at the Crystal Empire in Twilight's Kingdom - Part 1.

In Make New Friends but Keep Discord, S01E26 Unnamed Earth Mare #1 appears once again as a guest of the Grand Galloping Gala. In Princess Spike, she watches some ponies play a polo game outside Canterlot Castle. In Rarity Investigates!, she attends Princess Celestia's dinner party. In The Cutie Re-Mark - Part 1, she makes a background appearance standing outside the School for Gifted Unicorns with an unnamed stallion.

In Sparkle's Seven, S01E26 Unnamed Earth Mare #1 appears in Applejack's imagination sequence in the audience for Apple Chord's concert in a large theater. In She's All Yak, she appears in various sequences during Fit Right In among other high class ponies. In The Last Laugh, she makes a cameo appearance attending Kettle Corn's birthday party. After Cheese Sandwich's makes it successful, she appears in a line of his customers. 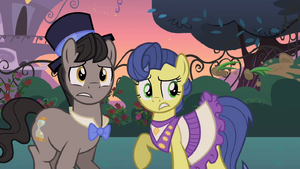