Matilda is a female donkey and Cranky Doodle Donkey's wife who first appears in the episode A Friend in Deed. She has a brown coat and a curly dark-brown mane.

Matilda first appears in A Friend in Deed, walking through Ponyville as Pinkie Pie tells her, "Miss Matilda, happy birthday to you... in one hundred and thirty two days!" Matilda responds, "Pinkie Pie! How do you remember everything about everypony?" Pinkie says it's because everyone is her friend.

Pinkie later brings Matilda to Cranky Doodle Donkey's home, having deduced that she was the "special friend" Cranky had spoken of earlier. Pinkie explains that she saw similar memorabilia to that in Cranky's scrapbook before, in Matilda's scrapbook. Cranky starts telling how his night with Matilda at the Grand Galloping Gala was the best night of his life, accompanied by a black-and-white flashback. After the Gala, Cranky comes to Matilda's room, but doesn't find her, though Matilda left him a note which he never saw. He says he spent the rest of his days going from town to town searching for her, and she replies that she was in Ponyville the whole time, and that she always hoped he'd one day find her. She affectionately calls him "Doodle," and Pinkie awkwardly tells her, "Nopony calls him Doodle," though Cranky replies, "Nopony... but Matilda." Matilda kisses him, putting a huge smile on his face. They both enter Cranky's house, and while leaning in for a kiss, Pinkie interrupts them with a song. They both reprimand her, and she apologizes and leaves.

Matilda makes a cameo appearance during Pinkie Pride, watching the goof off between Pinkie Pie and Cheese Sandwich. She shushes Spike after he explains to Rainbow Dash that Twilight Sparkle can find a rule-book for everything. She appears in the crowd during the turkey call contest in Filli Vanilli alongside Cranky. She also appears in Trade Ya!

In Slice of Life, Matilda marries Cranky Doodle Donkey. She becomes hysterical when a misprint in the wedding invitations causes a last-minute schedule change, and she rushes to get everything together in the middle of a monster attack in Ponyville. While getting her mane done at the spa, she meets Steven Magnet, a friend of Cranky's. Matilda also appears in Princess Spike.

In 28 Pranks Later, Matilda appears buying Filly Guide cookies from the Cutie Mark Crusaders and pretends to be a zombie as part of a prank against Rainbow Dash.

In The Break Up Break Down, Matilda makes a cameo appearance on a Hearts and Hooves Day date with Cranky.

In the special My Little Pony Best Gift Ever, Matilda is seen in the background alongside Cranky during the song One More Day.

In A Trivial Pursuit, Matilda participates in the Trivia Trot paired up with Rainbow Dash. In The Last Problem, Matilda attends Twilight Sparkle's coronation ceremony with Cranky. She also briefly appears in Pinkie Pie's group shot during The Magic of Friendship Grows.

The scene when Matilda asks Pinkie how she remembers everything about everypony reappears in Cakes for the Memories.

In the My Little Pony: Friendship is Magic Issue #30-31 story arc Ponyville Days, Matilda sides with the Apple family when Ponyville becomes split over who the true town founder is.

Matilda appears in chapter 2 of Applejack and the Honest-to-Goodness Switcheroo.

Matilda is a character in Gameloft's mobile game. Her in-game description states, "She's happy to be Cranky's one special friend -- which of course is why they were wed in the end!"

CRANKY DOODLE DONKEY may be a crotchety old grouch who's reluctant to loosen up, but all that changed when the sweet-natured MATILDA came around. Matilda met the cranky mule at the Grand Galloping Gala, where he began courting her as his "special friend." Matilda is the only one who's allowed to call him by the nickname "Doodle."

CRANKY DOODLE DONKEY has had it! Catch him on a bad day and get an earful of gripes. Don't mention his toupee, either—he's a little sensitive about his hair. It's a good thing his wife, MATILDA, is around to even out his temper. She's a Donkey damsel with a heart of gold, who always tries her best to lift her sweetheart's spirits.

"Pinkie Pie! How do you remember everything about everypony?"
— A Friend in Deed

"Goodness, you really are cranky."
— A Friend in Deed

"The invitations are wrong! This says the wedding is today!"
— Slice of Life

"When I first moved to Ponyville, Granny Smith was the first one to welcome me. Sweet Apple Acres is the heart of this place and should be recognized!"
— My Little Pony: Friendship is Magic Issue #30 page 6 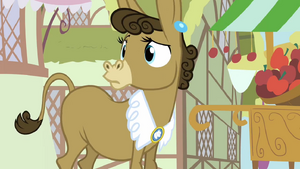