Maud Pie's human counterpart appears in the My Little Pony Equestria Girls franchise. She is a student at Canterlot High School and Pinkie Pie's older sister.

Maud first appears in My Little Pony Equestria Girls: Rainbow Rocks during the Rainbooms' slumber party at Pinkie Pie's house. As she gets Boulder something to "eat" in the kitchen, Twilight Sparkle and Sunset Shimmer share their disbelief that she is related to Pinkie. Maud also briefly appears in the crowd at the end of the film when Trixie makes her getaway.

In the Legend of Everfree blooper reel, Maud appears in the scene where Sunset Shimmer speaks with Flash Sentry. She takes the small pebble that Sunset picks up, revealed to be Boulder, and feeds him crackers while walking off-screen.

Maud is the primary focus of the Better Together short School of Rock. She gives a rather pun-filled lecture on rocks at the Canterlot Natural History Museum in her trademark monotonous delivery. Maud is also featured in the Applejack ending of the Choose Your Own Ending short Rarity Investigates: The Case of the Bedazzled Boot, having taken a missing boot prop for the school play and informing Rarity of its amethyst composition.

Maud is interrogated about a drawing of the Memory Stone. She then proceeds to give a rather detailed description of all the geologic properties of the rock, which Sunset and Trixie slowly walk away from.

Maud is briefly seen during a snowball fight, standing in the doorway to her home. She is hit by multiple snowballs, but is unphased, simply closing the door.

In the My Little Pony: Equestria Girls Holiday Special comic, Maud appears on pages 9 and 48 bringing pizzas to Pinkie and her friends' slumber party. Here, her name is spelled as "Maude".

"Welcome to Rock Talks with Maud. Are you ready for rocks?"
— School of Rock

"It's been rocky getting this new one off the ground, and we're all feeling... the pressure. That's a little rock business humor for you."
— School of Rock

"You might have thought this one is rose quartz, but it's actually amethyst."
— Rarity Investigates: The Case of the Bedazzled Boot

"I can't tell much from a drawing. [...] Only that it's felsic-intrusive igneous, granular in texture, most likely arranged in an equigranular matrix, with scattered biotite mica and amphibole, at least sixty-five percent alkali feldspar by volume, with a melting point of twelve-fifty centigrade, plus or minus ten degrees. Sorry I couldn't be more helpful."
— My Little Pony Equestria Girls: Forgotten Friendship 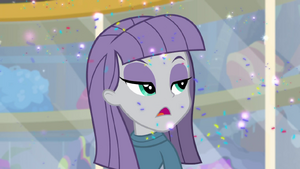 Retrieved from "https://mlp.fandom.com/wiki/Maud_Pie_(EG)?oldid=2141109"
Community content is available under CC-BY-SA unless otherwise noted.