For the character, see Maud Pie.

Maud Pie is the eighteenth episode of the fourth season of My Little Pony Friendship is Magic and the eighty-third episode overall. In this episode, the Mane Six meet Pinkie Pie's older sister, but they have trouble becoming friends with her.

On April 1, 2013, Meghan McCarthy wrote as part of an April Fools' Day joke that the nineteenth episode of the fourth season would be titled "Maude[sic] Pie" and be part of a season mini-arc in which Pinkie Pie becomes the Princess of Pie.[2] The plot of the episode was first teased at San Diego Comic-Con 2013.[3]

The episode is listed as the nineteenth episode of the fourth season on iTunes.[4]

Twilight Sparkle, Rainbow Dash, Applejack, Fluttershy, and Rarity arrive at Sugarcube Corner some time before sunrise. When Pinkie Pie answers the door and shoves them inside, they find the pink pony's upper-story loft filled with mountains of rock candy. With the arrival of Pinkie's sister Maud approaching, Pinkie asks her friends to taste-test her rock candy recipes.

After some time of taste-testing—and the ponies collapse from stomach and toothaches—Pinkie explains that the candies are part of a tradition between herself and Maud in which they make and trade rock candy necklaces. Pinkie wishes to let her friends in on this tradition, especially with Maud going away soon to get her "rocktorate" in rock science. Pinkie tells them how much she's looking forward to seeing her best friends and closest sister get along. When Rarity informs Pinkie that Maud will be arriving at the train station soon, she bolts out of the bakery to pick her sister from the train station.

And then there's Maud

Twilight and the others put together a lakeside picnic for Maud's arrival. When Pinkie and Maud arrive, Maud immediately puzzles the ponies with her odd, stoic mannerisms and taste in pets. While Pinkie is excited about her friends and sister becoming "bestest friends", Twilight and the others are decidedly less so.

The seven ponies engage in a game called "camouflage", which Maud describes as being "like hide-and-seek, but way more intense". The ponies have little fun playing, but they grin and bear it for Pinkie's and Maud's sakes. Seeing that their pets are all tired and bored, Fluttershy decides to cut the game short to take them home. As Pinkie leaves with Maud, the other ponies express how different they expected Maud to be. Believing Maud's strange behavior to be the cause of shyness, Twilight and friends decide to spend some one-on-one time with her to get to know her better.

At Carousel Boutique, Rarity attempts to bond with Maud over their supposedly shared love of fashion. However, Maud shows favor for a dirty dish towel over Rarity's other fabrics, using it as a scarf. In the forest, Fluttershy introduces Maud to some of her animal friends, but Maud is more interested in rocks. At the Golden Oak Library, Twilight learns that Maud loves poetry and writes her own.

At Sweet Apple Acres, Applejack and Maud make apple cider together, but Maud's idea of peeling apples involves mashing them with a rock. She also shares Applejack's honesty but is far more blunt and straightforward with hers. Finally, Rainbow Dash and Maud play a game involving throwing boulders across a lake. Maud wins but says she's "not really into winning", to Rainbow's complete shock.

The five ponies assemble outside Sugarcube Corner, where Pinkie is about to set up for them to make rock candy necklaces. The ponies tell Pinkie that despite their efforts to get closer to Maud, they haven't been able to connect with her like she has, and they wouldn't feel right taking part in a tradition between best friends with someone they aren't best friends with. The news upsets Pinkie, deflating her mane a little, and she retreats inside Sugarcube Corner alone.

Back at the library, Twilight and the others feel awful for upsetting Pinkie. Fluttershy says they should've just pretended to be friends with Maud, but Twilight thinks Pinkie would've found out one way or another. Just then, Pinkie Pie enters, claiming to have come up with an idea to bring them all closer together.

Pinkie brings her friends and Maud to a large obstacle course she constructed, calling it "Pinkie-Rainbow-Rari-Twi-Apple-Flutter-Maud Fun Time". Pinkie hopes to bring the seven of them together as best friends by combining all of her friends' interests into one big activity that culminates in a great rock slide. The rest of the ponies appear unnerved by the dangerous-looking course.

She demonstrates how the obstacle course is run, but when she reaches the rock climb, she gets her hoof stuck between two large rocks. Her efforts to get her hoof unstuck causes a giant boulder at the top to topple and fall toward her. Seeing Pinkie in danger, Maud races through the obstacle course at high-speed, flying toward the falling boulder before pummeling it to pieces with her bare hooves. The spectacle leaves the other five ponies speechless.

Maud frees Pinkie from being stuck and brings her to safety. Believing that Pinkie's efforts for her and Pinkie's friends to become close are in vain, Maud decides to spend the rest of the week on her family's rock farm. She says goodbye to the other ponies before leaving, and Pinkie goes with her. Impressed by Maud's feat to save her sister, Twilight finally realizes what she and her friends have in common with Maud.

Pinkie accompanies Maud on her train ride to the rock farm; Maud is glad that they'll be able to spend some time together before she leaves on her research trip. Pinkie apologizes for putting pressure on everyone to bond.

When Pinkie and Maud reach the farm, they find Twilight and the others waiting for them. They apologize to Pinkie for hurting her feelings and to Maud for causing her to cut her visit short. They tell Maud that what they all have in common is their love for Pinkie Pie. Maud accepts this; though she doesn't outwardly show it, this is the most excited she's ever been according to Pinkie. Likewise, Twilight and the others are accepting of Maud's stoic nature.

At the train station, the ponies give Maud rock candy necklaces for her trip, and Pinkie and Maud trade necklaces as per their tradition. Twilight sees Maud place Pinkie's necklace inside a box and discovers that Maud hasn't eaten a single necklace Pinkie gave her. Maud smiles and admits that she doesn't really like candy.

Rainbow Dash: Hold on. The secret ingredient is rocks?
Pinkie Pie: Yeah. But these are a special kind of rock that Maud discovered.
Fluttershy: Oh, what kind of a rock are they?
Pinkie Pie: Can't tell ya that, silly! [whispering] It's a secret!

Rainbow Dash: We spent all day digging in the dirt, and he was in her pocket the whole time?!
Fluttershy: On the bright side, Boulder seemed really sweet.
Rainbow Dash: He's a rock!

Pinkie Pie: Maud is a total bookworm. She loves poetry!
Twilight Sparkle: I've got lots of poetry. Do you read anything by Quilland Ink? Or Flourish Prose?
Maud Pie: [deadpan] I prefer to read my own poetry.
Twilight Sparkle: Oh, I'd love to hear some of it!
Maud Pie: [clears throat] [deadpan]

Rock.
You are a rock.
Gray.
You are gray.
Like a rock.
Which you are.
Rock.

I've written thousands.
Pinkie Pie: She's so prolific!
Maud Pie: [deadpan] This next one is about rocks. They're all about rocks.

Rocks; these are my rocks.
Sediments: make me sedimental.
Smooth and round, asleep in the ground.
Shades of brown and gray...

Rainbow Dash: [about Maud] That pony is a riddle wrapped in a mystery inside an igneous.
Rarity: Don't you mean "inside an enigma"?
Rainbow Dash: No. I mean "igneous". It's a kind of rock. Ask me how I know that.

Maud Pie: Pinkie Pie, what were you thinking?
Pinkie Pie: I guess I wasn't.

Fluttershy: Pinkie Pie was in trouble! Maud would move mountains for her if she had too.

Pinkie Pie: I'm sorry I put so much pressure on everypony to bond. I only wanted my friends to get to know my amazing older sister.

Applejack: We've seen how much you care about Pinkie Pie firsthoof.
Twilight Sparkle: Pinkie Pie's happiness means as much to us as it does to you, and we're sorry we couldn't see it sooner. The thing that makes us click and creates a special bond between us is how much we all love Pinkie Pie!
Pinkie Pie: Aw, shucks!
Twilight Sparkle: That's a pretty great thing to have in common, if you ask me. What do you think, Maud?
Maud Pie: [deadpan] Sure.

Maud Pie: [deadpan] I don't know if you've noticed, but I don't show my enthusiasm for things quite in the same way my sister does. 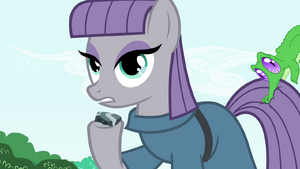