For the character of the same name, see Maud Pie/Gallery.

Clearly, Dash is not a morning pony.

"Celestia hasn't even raised the sun yet!"

Pinkie Pie, with a chef's hat and safety goggles - what in Equestria is she up to?

Last one in is a rotten Rainbow Dash!

"I need your help taste-testing."

"I may have gone a teensy bit overboard," she said without even a hint of exaggeration.

Dashie has really let herself go. And when did Twilight turn back into a unicorn?

Just 'cause she works on the farm doesn't mean her sweet tooth asks for so much.

Before she gets here...

"She's only staying for the week."

" We are going to make rock candy necklaces together!!! (As Fluttershy would say, "Yay!")

I've heard of limited animation, but this is ridiculous.

...she taught me how to make rock candy herself.

It was one of the best lessons I've learned!

Maud brings in the rocks

Eating actual rocks? This is ridiculous.

We also used the candy to make necklaces.

Maud and I have been trading since then

"What a great tradition."

"The secret ingredient is rocks?"

"But these are a special kind of rock that Maud discovered."

Why am I getting reminders of Griffon the Brush Off from this image?

"Won't she start worrying if you weren't at the train station when she gets here?"

"I gotta get outta here!"

The poor ponies, surrounded by candy.
Add a photo to this gallery

I sure hope Maud has an appetite

Stop that, you greedy varmint

Is that Pharrell Williams' hat?

"Anything suitable to wear."

Okay, maybe I did go a bit overboard.

"Pinkie really wants us to hit it off."

The reactions of the pets and Pinkie's friends.

The suspense is killing us!

"Is she even moving?"

And then there's Maud.

And, this is the one and only Rainbow Dash.

The ever so fashionable Rarity.

"Pinkie Pie tells me you share my love for fashion."

"I'm really into expressing myself through my wardrobe."

"A-and what is the delightful frock you're wearing now saying?"

Of all the pets, only Winona seems mildly interested in Maud.

"Pinkie Pie told us you have a pet, too."

Notice how Angel is jealous in the bottom-left corner.

What? You've never seen someone like a certain pink starfish that wears swim trunks have a rock as a pet?

"His name is Boulder."

I'm sure we'll all become the best of friends!

..but Pinkie's friends have second thoughts about that.
Add a photo to this gallery

Come and join us, Maud.

You can let Boulder have it.

How about a muffin for yourself?

Pick a muffin, any muffin.

Much like Rarity, Maud Pie has a good taste for gems.

There was a sandwich in front of Boulder a moment ago. I guess he ate it.

"Maud's right! They are crunchy! Yum!"

"Boulder and I sometimes play a game called 'Camouflage'. It's kind of like hide and seek but waaaay more intense."

Maud wasn't kidding. This is way more intense than Hide and Seek.

"It's like lookin' fer a pebble in a haystack."

"Look how much fun Pinkie Pie's having."

Uh, Pinkie, that boulder's a little too big to be Boulder.

"He was hiding in my pocket."

[Italian-American gangster accent] 'Scuse me, toots, but me pals and I all wants ta go home!

The pets are so exhausted, even Gummy is actually making a face.

How did you got on Maud real fast, Gummy?

Trying to get closer

"We spent all day digging in the dirt, and he was in her pocket the whole time?!"

"On the bright side, Boulder seemed really sweet."

"I'm sure Maud was just nervous."

"It must be awfully intimidating."

"You were so funny!"

"Uh, I believe that's a dishtowel."

Aw, you shouldn't have.

"I was looking at the rock."

"Maud is a total bookworm. She loves poetry!"

"Do you read anything by Quilland Ink? Or Flourish Prose?"

"I prefer to read my own poetry."

Rock.
You are a rock.

Gray.
You are gray.
Like a rock.
Which you are.
Rock.

Even Raven would think, "Wow, this pony's nuts!"

Rocks; these are my rocks.
Sediments: make me sedimental.
Smooth and round, asleep in the ground.
Shades of brown and gray...

"I think this one is done."

It was Maud in the kitchen with the rock.

Well, that's certainly a Pinkie way to drink a cup of cider.

"Told you she was super honest!"

How does she not get dizzy?

Whoa! What a throw!

And boom goes the dynamite.

Seriously, is Rainbow Dash really awesome enough to have "Never Wet" in her hair?

"I guess you won this one, Maud"

You Maud, bro?
Add a photo to this gallery

"So this is the perfect time."

YOU tell her, Twilight.

Uh, you tell her, Rarity.

Uh, you tell her, Fluttershy.

Leave it to honest Applejack to spill the beans.

And the mane begins to deflate...

"That pony is a riddle wrapped in a mystery inside an igneous."

Maud is not impr—Wait, she's made this face the entire episode. How do we know whether she is impressed or not?

The amusement park of torture!

"Welcome back, Equestria, to Wipeout!"

Good luck guessing which outfit goes with which pony.

"Here with us today is our on-location announcer, Pinkie Pie, master baker and party planner of Ponyville."

"Today our contestants will have a tough challenge. First, it's a crawl through the Applesauce Tunnel, complete with real applesauce."

"The Pit of Sparkling Fabrics, an eye-catching entanglement trap."

"The Great Wall of Read It and Weep! Try not to get caught by those hanging participles."

"Rounding the track, contestants must win a hand at our Crazy Card Critters Table. Careful, they say there's a Card Shark hiding under the table."

"After that, they have 10 seconds in the Cupcake Storm wind bubble. If they can find the peppermint cupcake, they get an extra thousand bucks at the end."

"Following that is the Tightrope Raceway. After a quick slide down and a launch through a Ring of No Fire…"

"Contestants face off with the final obstacle, the famous Leaning Tower of Rocks! That giant boulder at the top is a new addition never before seen by contestants, so it's sure to make for an exciting obstacle."

Maud Pie is impressed... I think

"Good luck to you all! (Wipeout and its associates are not responsible for any injury, physical or emotional, which you may experience while participating in any activities, no matter how legally suspect or safety hazard-ridden, on the Wipeout premises.)"

Hang on, little sister, I'll save you!

Will she make it?

"What– how– what?!"
Add a photo to this gallery

"Pinkie Pie, what were you thinking?"

"I know how important it is to you that your friends become my friends, but I just don't think it's going to happen."

"I think it would be best if I just go back to the rock farm and spend the rest of the week there."

"It was nice to meet you all. Makes me happy knowing Pinkie Pie has such good friends."

"But... we never even got to make our rock candy necklaces."

"Did you see how fast Maud moved?"

Notice that Boulder is attached to the wrong hoof.

Wow! They got here fast!

I can't tell, but I think she's blushing.

"That's a pretty great thing to have in common, if you ask me. What do you think, Maud?"

"Sorry, darling. I think we all just thought she'd be a bit more excited about this."

"I don't know if you've noticed, but I don't show my enthusiasm for things quite in the same way my sister does."

"And we're totally cool with it."

Pinkie being Pinkie and Maud being Maud.
Add a photo to this gallery

Looks as if Twilight still is pretty bad at arts and crafts.

Ugh! Too much rock candy in this one!

"You haven't eaten any of them?"

"But I do love Pinkie Pie."

At least she smiles ONCE when admitting she loves Pinkie Pie over candy.

I hope you don't get cavities Pinkie!
Add a photo to this gallery

All of us against you in a staring contest. Go! 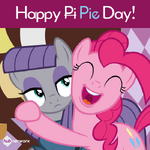 Cross promotion with Pi(e) Day (03/14).
Add a photo to this gallery
Retrieved from "https://mlp.fandom.com/wiki/Maud_Pie_(episode)/Gallery?oldid=2056190"
Community content is available under CC-BY-SA unless otherwise noted.