May the Best Pet Win!

May the Best Pet Win! is the seventh episode of the second season of My Little Pony Friendship is Magic and the thirty-third episode overall. The episode title is a play on the idiom "may the best man win", which is said in the spirit of sportsmanship.

In this episode, Rainbow Dash decides to hold a competition to determine which is the best pet for her after realizing that she's the only one of her friends without one.

Production and reuse of assets

The episode was conceived of and written almost a year prior to its November 19, 2011 premiere.[1] On April 21, 2013, Lauren Faust stated regarding Tank, "Hasbro paired RD with a tortoise[sic] for the first batch of toys & I liked it and rolled with it. I think Rob came up with the name."[2] Charlotte Fullerton stated in 2015 that Hasbro had "wanted each of the ponies to have their own pet";[3] pets owned by the rest of the Mane 6 had been introduced in the first season.

The sunglasses worn look similar to the same sunglasses that Rainbow Dash wore in Lesson Zero while the pink scarf is the same one worn by Rarity in Dragonshy and Twilight in Winter Wrap Up.

The episode was #5 in the We Heart Ponies Fan Favorite Mare-a-thon, in the leadup to Hearts and Hooves Day.

The episode starts with Rainbow Dash in a dream flying around in the sky, when suddenly Owlowiscious comes up and starts flying with her. Strangely, Owlowiscious' head turns into Winona's head. Then, the body turns into Gummy's body and the head turns into Angel's head. Suddenly, Opalescence pops out of Angel's mouth, scaring Rainbow into falling, which wakes her up.

When Rainbow Dash wakes up, she is met by Rarity, Fluttershy, Pinkie Pie, Applejack and Twilight Sparkle, all of whom are in the park with their pets. They tell her that they always come down to the park at the same time every week with their pets to play with them. The ponies try to make Rainbow understand why they don't invite her, but Rainbow, who is the only pony without a pet, exclaims that she understands and sees no reason for them to invite her if she doesn't even have a pet.

"Hey, now wait a minute! Just because I don't have a pet now doesn't mean I never want a pet!"
— Rainbow Dash

However, after hearing the noise from the ponies playing with their pets, Rainbow Dash flies back down from her tree to them and says that she would like a pet at some point. Thrilled, Fluttershy brings her to her home to show off her collection of animals. Fluttershy and Rainbow break into song as Fluttershy shows Rainbow her wonderful choices of pets. Rainbow insists she wants a "cool pet that will be able to keep up with her," and selects a group of flying animals but is unable to decide. To make a firm decision, she holds a series of contests to determine which pet will be hers. As she prepares to begin, Fluttershy brings in a tortoise who she says wants to compete. Rainbow reluctantly agrees.

"So! You all think you've got what it takes to be my pet, do ya? Well, we'll just see about that! If any of you don't think you can handle it, bow out now before you humiliate yourself in front of your peers. This competition isn't for the weak. You'd better be prepared to step up your game!"
— Rainbow Dash

The first test is that of speed, a race around a track which a falcon wins. The second test is a test of agility across an obstacle course in which a hummingbird wins. The third test is of guts, where the pets have to get Opal's favorite mouse toy away from her. The butterfly easily achieves this by mesmerizing Opal into a daze, then stealing her toy. The fourth test is of style, which is done by having Rainbow pose in a snapshot with each of the animals. It is not revealed which animal passes this test. The fifth test is of coolness, where Rainbow judges the animals by their calls, of which the eagle wins. The sixth test is of awesomeness, which the owl wins because of his ability to rotate his head. The seventh test is of radicalness, in which the bat plays the My Little Pony theme song on a glass harmonica, among feats by the other contestants. At this point, the tortoise has come out last on every test and Rainbow urges him to go home.

Still unable to choose, Rainbow decides to hold a race in Ghastly Gorge, pitting the last four contestants, the eagle, the falcon, the owl, and the bat against her, with the tortoise tagging along with the other contestants. Rainbow tells them that whichever contestant crosses the finish line with her has proven that it can keep up with her, and is worthy of being her pet. The flying pets remain very close during the race, while the tortoise is last, sweating as he tries to catch up with Rainbow. The falcon gets stuck in bramble bushes, but the bat, eagle, and owl make it through. The falcon catches up later with his wing curled up. Near the caves with the quarray eels, the bat is almost devoured but manages to get away. While distracted, Rainbow hits a wall, and there is a rock slide. The racers suddenly get ahead of Rainbow while she falls behind with her wing stuck underneath a large rock.

She desperately calls for help, stuck under the boulder with no one to help her. She spots the tortoise slowly approaching her, and laments about how she'll have to spend the rest of her life with the tortoise as well as being trapped by a rock. The tortoise digs a small hole under the rock and sticks his head in it. Weeping, Rainbow completely gives up hope. The tortoise, however, lifts the rock with his head, freeing Rainbow's wing.

At the finish line, Rainbow's friends await her arrival. Noticing that only the four racers finish the race, they begin to worry about Rainbow. Applejack spots a rock slide through Twilight's binoculars, but also spots Rainbow riding on the tortoise with her right wing bandaged. Rainbow and the tortoise finish the race, and the other ponies tell Rainbow to meet her new pet, the falcon.

However, Rainbow doesn't feel right with the falcon as her pet, even if it is everything she wanted. She says that her pet would be the one that finished the race with her, and the tortoise is the only one who did so. With this in mind, she accepts the tortoise as her new pet, thanking him for saving her. The sad falcon shakes hands (so to speak) with the tortoise and leaves. Rainbow then asks Spike to take a note for Princess Celestia, telling her that she learned the most important quality in a pet, or in any friend is not how cool they are or how much they can do, but is a kind of spirit that will stand by her.

At the end of the episode, Rainbow now joins the rest of her friends in their pet playdate. Rainbow's tortoise is then shown wearing a helicopter hat, flying to the park after Fluttershy points out that Rainbow wanted a pet that can keep up with her, and she names him Tank.

Rainbow Dash: Um, is this weird, or is it just me?

Rainbow Dash: Okay, this is officially beyond weird now and moved right on down to freaky town.

Twilight Sparkle: Well we had initially planned on inviting Rainbow, of course, except–
Pinkie Pie: We were totally gonna invite you, Rainbow, then Twilight remembered that you don't even have a pet, and Rarity remembered that you really like to take naps in the afternoon, so Applejack figured you wouldn't be missing out on anything anyway, and Fluttershy and I nodded our heads in agreement like this.
Fluttershy: Oh, please don't be mad at us.
Rainbow Dash: Oh, I'm not mad. You all are right. Not much point of a pony-pet playdate for me if I'm a pony without a pet, right?
Applejack: Exactly.

Rainbow Dash: This competition isn't for the weak. You'd better be prepared to step up your game!

Rainbow Dash: Any questions?
Applejack: I got one. Does she understand what a pet really needs?
Twilight Sparkle: Yeah, like care and attention, love and affection- ugh! And breath mints!

Rainbow Dash: Alright, now these games will determine which one of you has the most important qualities I'm looking for in a pet. Speed, agility, guts, style. Coolness. Awesomeness. And radicalness.
Twilight Sparkle: Aren't those all the same thing?
Rainbow Dash: You would think that, Twilight. And that's why you would never qualify to be my pet.

Rainbow Dash: Wanna know the opposite of agility? That.

Rainbow Dash: Wahoo! My prayers have been answered! Oh, thankyouthankyoutha- You?! Oh no! Now I'm not only going to be stuck here forever, I'm gonna be stuck here with the most annoying turtle in the world! Gyh, I'm doomed. DOOMED, I tell you!

Pinkie Pie: Wait! Look
Fluttershy: It's the turtle!
All: TORTOISE!
Fluttershy: Oh whatever... 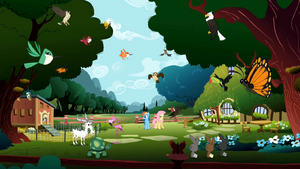