Meadow Flower is a female Pegasus pony with a pink coat, two-tone yellow mane and tail, blue eyes, and a cutie mark of a sunflower. She appears in the season three episode Wonderbolts Academy with a speaking role. She is unnamed in the series, credited as "Cadet #2" in the aforementioned episode, but she is named in merchandise.

According to a DeviantArt journal by Sabrina Alberghetti, Meadow Flower was originally Wild Fire.[1]

Meadow Flower appears in the season three episode Wonderbolts Academy as a Wonderbolts cadet under the instruction of drill sergeant Spitfire.

During training, Meadow Flower is the first cadet to try out the Dizzitron and averages a recovery time of fifteen seconds. Later in the episode, she is paired with Starry Eyes as his lead pony. At one point during training, Rainbow Dash and Lightning Dust fly past her and Starry Eyes on the obstacle course and cause them to spin out into the other cadets.

During the cloud-busting portion of cadet training, the flaming tire cutie mark of Wild Fire and Hairpin Turn is used to represent her on a chalkboard. When Rainbow Dash and Lightning Dust's tornado causes Twilight Sparkle and her friends to fall to their doom, Meadow Flower rescues Twilight. She is last seen saluting to Rainbow Dash and following her lead.

In the Signature My Little Pony magazine issue 69 comic Daring friends and the missing story!, either Meadow Flower with Helia's design or Helia with Meadow Flower's coat color appears at the Canterlot Magic Fair.[2]

In My Little Pony: Deviations, Meadow Flower joins Rainbow Dash and other Pegasi in attempting to contain Nightmare Moon inside of a wind sphere.

Images of a Hasbro POP Design-a-Pony figurine of Meadow Flower appeared on Taobao.[3] The figurine's packaging names Meadow Flower with a trademark symbol.

A pearlescent Playful Ponies toy of Meadow Flower was shown at the 2016 New York Toy Fair and is set to be released in Fall 2016 as part of the Explore Equestria toy line.

She also appears on the fan-designed WeLoveFine T-shirts "Wonder Academy Sky High" and "The Dizzytron".

"You made it look so easy."
— Wonderbolts Academy

"Oh, this is gonna be so much fun!"
— Wonderbolts Academy 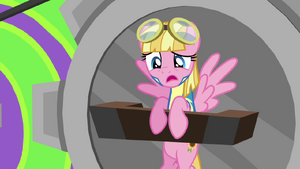