Meadow Song is a male Earth pony who appears in several episodes throughout the series. He has a moderate brown coat, amber mane and apple green eyes. The show does not name him, only referring to him as "Working Pony" and "Pony MC" in the credits of the episodes Too Many Pinkie Pies and The Maud Couple respectively, but he receives his name from merchandise. He shares his design with Dr. Hooves and Lucky Clover, and shares his mane and tail style with Mane Moon and Buddy.

Meadow Song is a background pony who generally appears in large groups at events throughout the series. He sometimes accompanies members of the Apple family. In multiple episodes, he wears a prospector's hat.

In season one, Meadow Song is first seen during Twilight Sparkle's return scene to Ponyville at the end of Friendship is Magic, part 2, with no cutie mark. He next appears in Applejack's fantasy during The Ticket Master, still with no cutie mark. He is then seen in Boast Busters as a member of the crowd watching Trixie's magic show, again with no cutie mark. He is also seen in Fall Weather Friends, watching Applejack and Rainbow Dash take part in the Iron Pony competition. He is seen as a Pegasus in Sonic Rainboom with a speaking role. He then appears in The Show Stoppers and Green Isn't Your Color. He is next seen in Over a Barrel with the rest of the Appleloosans wearing a prospector's hat. He later appears in The Cutie Mark Chronicles and The Best Night Ever.

Meadow has a recurring background appearance dressed as a ninja in Luna Eclipsed alongside other partygoers. He dances with Berryshine and comforts an upset "Noi" after Princess Luna cancels the Nightmare Night festival. He is also seen during Family Appreciation Day, lining up for zap apple jam both in Granny Smith's sepia flashback and in the present day. He then appears in The Last Roundup at the Canterlot stadium, first wearing a prospector's hat and subsequently as a rodeo clown. He is next seen during The Super Speedy Cider Squeezy 6000 and Hearts and Hooves Day. He later attends Iron Will's seminar during Putting Your Hoof Down, with a speaking role. He next appears in It's About Time, and later appears in Ponyville Confidential. He appears in a picture in A Canterlot Wedding - Part 1, with a different mane style and no cutie mark. He also appears in A Canterlot Wedding - Part 2, serving as one of Shining Armor's assistants at his wedding to Princess Cadance. He is present for the failed wedding but absent from the successful wedding, and later appears wearing a prospector's hat at the wedding reception alongside Apple Fritter with Applejack.

Meadow is seen helping raise a new barn in Too Many Pinkie Pies alongside Applejack, Big McIntosh and Apple Fritter. He is next seen in One Bad Apple. He also turns up in Apple Family Reunion, helping raise another barn with the Apple family, but he is not included in any of the family photos. Meadow Song is also seen during Games Ponies Play, wearing a prospector's hat at the Crystal Empire, and in Magical Mystery Cure.

Meadow Song appears in the crowd at the Crystal Empire in Flight to the Finish, at the train station in Three's A Crowd, and in both Appleloosa and Ponyville in Pinkie Pride, where he helps prepare the party, appears yet again in the crowd, and appears in a flashback, playing an accordion. In Simple Ways, he is seen during the Ponyville Days Festival announcement, and sometimes has a different cutie mark. He also appears in Filli Vanilli, in It Ain't Easy Being Breezies, in For Whom the Sweetie Belle Toils, in Leap of Faith, in Trade Ya!, in Equestria Games, and with Twilight Sky's design in Twilight's Kingdom - Part 2.

In Appleoosa's Most Wanted, Meadow Song appears as both a spectator and rodeo clown performer. He attends Cranky Doodle Donkey and Matilda's wedding in Slice of Life and the Grand Equestria Pony Summit in Princess Spike. He appears in Dodge Junction in Party Pooped, in Ponyville's shared dream in Do Princesses Dream of Magic Sheep?, at the Sisterhooves Social in Brotherhooves Social, and in Scare Master, he is once again dressed as a ninja, visiting the corn maze.

In The Maud Couple, he appears as the emcee of the comedy club, and he has a speaking role at the beginning.

Meadow Song is one of many ponies seen in the establishing shot of Ponyville in My Little Pony Equestria Girls: Rainbow Rocks.

Meadow Song appears in a yearbook picture on cover A of My Little Pony: Friendship is Magic Issue #11.

Meadow Song, with the same appearance as in The Last Roundup and Appleoosa's Most Wanted, is a character called "Musical Clownspony" in Gameloft's mobile game. The game's description of him states, "Get your foot tappin' and your heart racin' with Musical Clownspony's musical mastery!"

There is a mystery pack mini-figure toy of Meadow Song that is the source of his name, which the U.S. version lists as a trademark. He has a similar mane and coat color to his show version, however his eyes are cyan as opposed to green. His descriptions on the collector card that comes with the toy are "MEADOW SONG is so musical!" in the European version and "MEADOW SONG is so musical and friendly!" in the U.S. version. Meadow Song appears on the Royal Wedding poster.

"Uh-uh, no sir..."
— In response to Iron Will in Putting Your Hoof Down 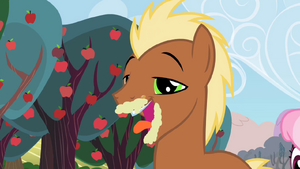