For the character in "A Hearth's Warming Tale", see List of ponies/Unicorn ponies#Merry.

Merry May is a female Pegasus pony with a spring bud coat, plum mane and tail with a lavender pink streak, amaranth pink eyes, and a cutie mark of three suns. She has not been named in the show, but she has a name in merchandise. She is identical to Sunny Rays apart from her coat color, shares her design with Cloud Kicker, and shares her mane style with Lily Valley.

Merry May is commonly featured in Ponyville and Cloudsdale as a background pony.

Merry May first appears in The Ticket Master as a pony sitting in the bleachers during Rainbow Dash's fantasy. She also appears in Applejack's fantasy of selling apples in The Best Night Ever.

Her first appearance outside of any fantasies is in Griffon the Brush Off as a customer at a vegetable stand and as an attendant at Gilda’s party (where she has a spoken line amongst indistinct conversation after Gilda leaves angrily). She, along with Orange Swirl, pulls the trailer which drops a myriad of items on Twilight Sparkle in Feeling Pinkie Keen. In Sonic Rainboom, she works in both the rainbow-making section and the cloud-making section of Cloudsdale's weather factory.

In Too Many Pinkie Pies, Merry May briefly appears flying past Sugarcube Corner with Rainbowshine. In Sleepless in Ponyville, she watches Scootaloo jump through Ponyvile on her scooter. In Magical Mystery Cure, she makes various background appearances flying outside Ponyville Town Hall during Morning in Ponyville, in the mob complaining to Rarity about the weather, and attending Princess Twilight Sparkle's coronation outside Canterlot Castle during Life in Equestria.

Merry May appears in Princess Twilight Sparkle - Part 1 and Princess Twilight Sparkle - Part 2. She is one of the relay team finalists for the Equestria Games, as seen in Rainbow Falls. Her other two teammates are Cloud Kicker and Warm Front. Merry May also appears in Pinkie Pride, Simple Ways, For Whom the Sweetie Belle Toils, Leap of Faith, and Trade Ya!. In Equestria Games, she competes the leadoff leg for her team in the aerial relay, and finishes outside of the medals. Merry May later appears in Twilight's Kingdom - Part 1 and Twilight's Kingdom - Part 2.

In Tanks for the Memories, Merry May appears among other Pegasi moving clouds in preparation for winter. In Slice of Life, she watches as DJ Pon-3's mobile DJ station speeds through Ponyville. In Princess Spike, she attends the Grand Equestria Pony Summit. She attends the friendship party in Party Pooped and appears in Ponyville's shared dream in Do Princesses Dream of Magic Sheep?. In Crusaders of the Lost Mark, Merry May witnesses Diamond Tiara blocking the Cutie Mark Crusaders from chasing her. She also briefly appears at the beginning of The One Where Pinkie Pie Knows, has a crowd-speaking role in The Mane Attraction, and appears in past Cloudsdale in The Cutie Re-Mark - Part 1.

In A Hearth's Warming Tail, Merry May appears during Hearth's Warming Eve Is Here Once Again helping to decorate the Castle of Friendship. In The Cart Before the Ponies, she appears during Rarity's flashback observing Rarity's derby cart, and then she cheers for Derpy after being awarded for "most creative". She also appears doing the wave during Derby Racers. In The Fault in Our Cutie Marks, she watches Gabby play baseball during Find the Purpose in Your Life.

In It Isn't the Mane Thing About You, Merry May has a brief speaking role while getting her flowers from the flower stand.

Merry May appears very briefly in School Daze - Part 1, fleeing from the School of Friendship when Ocellus crashes into the building transformed into a monster during the school's "Friends and Family Day". She also appears in the reused shot of attending a fashion show in Canterlot in Green Isn't Your Color in Fake It 'Til You Make It

In Sparkle's Seven, Merry May appears as an Earth pony in Applejack's fantasy attending Apple Chord's concert. In The Summer Sun Setback, she assists Rainbow Dash and Sunshower Raindrops in clearing the storm clouds causing havoc in the Summer Sun Celebration by Cozy Glow.

Merry May is one of many ponies seen in the establishing shot of Ponyville in My Little Pony Equestria Girls: Rainbow Rocks.

In Forgotten Friendship, Merry May briefly appears in the second establishing shot of Canterlot talking to Orange Swirl.

Merry May appears in Cutie Mark Magic, in Hearth's Warming Eve, and in Land of Harmony.

In My Little Pony: Ponyville Mysteries Issue #4, Merry May appears on page 11.

A glitter mini-figure toy named Merry May was released in May 2012 as part of the fourth wave of mystery packs. The toy uses the Rainbow Dash mold but is completely green except for the eyes and the cutie mark. The color scheme matches the show character's, but the cutie mark is slightly different, appearing to be three flowers instead of three suns. The name comes from the collector card accompanying the toy. According to the European version of the card, Merry May "loves all flowers". The U.S. version of the card has a longer description and reads, "MERRY MAY loves all flowers, especially spring daisies!"[1]

"Um, what just happened?"
— Griffon the Brush Off 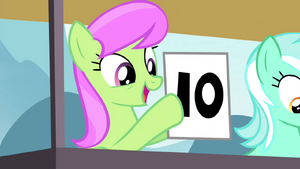