Michael Peña is an American actor and musician. He provides the voice of Grubber in the feature film My Little Pony The Movie.

Peña's involvement in the film was first announced by The Hollywood Reporter in April 2016;[1] this was later confirmed by the official My Little Pony The Movie Twitter in February 2017.[2]

In interviews, Meghan McCarthy stated regarding Peña's performance, "You get Michael Peña in a recording booth, and you just are like, 'Please just go and say funny things.' He will be there for hours, just giving you all kinds of really great material that was not something that we had originally scripted! However we knew he was the guy who could bring it to life."[3]

Outside My Little Pony, Peña is an actor in many films and television series, having been a regular in independent productions since 1994. His breakout performances were in 2004's Million Dollar Baby and Crash. He would later star in and be critically recognized for such films as World Trade Center, Babel, Shooter, Battle: Los Angeles, End of Watch, American Hustle, César Chávez, and Fury. In 2015, Peña starred as Luis in the Marvel Cinematic Universe film Ant-Man and reprised the role in its 2018 sequel Ant-Man and the Wasp.

In television, Peña has starred in the Golden Globe-winning series The Shield, the 2006 HBO film Walkout (for which he won a Black Reel Award and was nominated for an ALMA Award), the 2014 animated sitcom Chozen, and the 2014 crime drama Gracepoint.

In other voiceover, Peña has starred in Turbo, Hell and Back, The Lego Ninjago Movie, and Next Gen.

Peña also formed the Los Angeles rock band Nico Vega in 2005, but he left the band in 2007 to focus on his acting career. 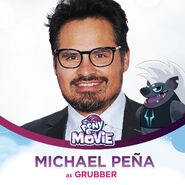