Micro Chips first appears in My Little Pony: Equestria Girls as a student of Canterlot High School. Fluttershy identifies him as one of the "techies" in the school's various social cliques.

As Twilight Sparkle tries to figure out how to reclaim her stolen crown from Sunset Shimmer, Micro Chips finds her acting strangely in the school hallway. During Equestria Girls (Cafeteria Song), he records a video of Twilight and her friends' performance with his smartphone, and he joins his fellow students in dancing. Later, at the Fall Formal, he works the audio during the performance of Flash Sentry's band, and he dresses and dances like Korean songwriter Psy.

In My Little Pony Equestria Girls: Rainbow Rocks, Micro Chips is turned against his fellow CHS students by the Dazzlings' siren magic. He performs in the CHS Musical Showcase with "Wiz Kid" and "Scribble Dee", but they are eliminated in the first round by Lyra Heartstrings and Sweetie Drops.

In My Little Pony Equestria Girls: Friendship Games, Micro Chips takes part in the titular sporting event against Crystal Prep Academy as a member of the Canterlot High School Wondercolts. During the wood-shop portion of the Academic Decathlon, he is paired up with Sandalwood, and the two produce a shoddily put-together birdhouse. They are eliminated from the competition by Sugarcoat and Indigo Zap, who gloat over their victory afterwards.

In My Little Pony Equestria Girls: Legend of Everfree, Micro Chips goes with his friends and classmates to Camp Everfree, appearing at several points throughout the film.

Micro Chips is the main focus of one of the endings to the short All the World's Off Stage, in which he convinces Bulk Biceps to pull a heavy stage backdrop during a rehearsal of the school play. He also makes cameo appearances in School of Rock, A Fine Line, Queen of Clubs, Overpowered, Display of Affection, Aww... Baby Turtles, Lost and Found, Fluttershy's Butterflies, Five to Nine, Opening Night, and the Rainbow Dash and Rarity endings of Happily Ever After Party.

In the second season short Best in Show: The Pre-Show, Micro Chips enters the first Canterlot High pet show, with his toast-making robot, JVJ-24601 as his entry. In Best in Show: The Victory Lap, Micro Chips' robot wins second place. In Schedule Swap, he appears in a painting class, painting his toast-robot rather than the model, Bulk Biceps. In FOMO, he talks to Sandalwood outside the school and walks under his arm. In I'm on a Yacht, he appears attending the pool party on the Luxe Deluxe cruise ship. In Festival Looks, he appears in a computer video call profile picture. In Five Lines You Need to Stand In, he appears standing in the security line at the Starswirled Music Festival. In Cheer You On, he unsuccessfully tries to stop an out-of-control JVJ-24601 as it rampages through the school. After the robot is defeated by the Equestria Girls, Twilight gives him back his remote.

In his own ending of the Choose Your Own Ending season 2 short The Road Less Scheduled, Micro Chips is revealed to be a theremin musical performer at the Starswirled Music Festival under the stage name "MC Dex Effex". In Lost and Pound, he appears standing with "Cloudy Kicks" near the festival food trucks. In the Snips ending of Accountibilibuddies, he makes a background appearance attending Dirk Thistelweed's concert at the festival. In the Applejack and Sunset Shimmer endings of Costume Conundrum, he talks to Derpy while attending Bulk Biceps' costume party in his MC Dex Effex costume.

Twilight mentions Micro Chips receiving the Superlative for "Most Likely to Invent Cold Fusion" over her. Also, when Sunset confronts him, he adamantly gives her his lunch money thinking she is still the Biggest Meanie. In the extended version of the special, he is interrogated by Sunset and Trixie Lulamoon about removing memory, after which he shows them how he removed memory from a disk.

Rollercoaster of Friendship marks the first time Micro Chips is referred to by name. He fills the position of "Caramel Apple Girl" at Equestria Land that Applejack was aiming for, having been hired by the park's public relations head Vignette Valencia for his "cool nerd chic." Vignette later teleports him into a white room in the park with her Equestrian-magic enchanted phone for not being "as cool a nerd as she thought."

In Spring Breakdown, Micro Chips appears as a passenger on the spring break cruise aboard the Luxe Deluxe. He first appears falling off the diving board at the ship's pool after being startled by Pinkie Pie and makes subsequent appearances eating shrimp with unnamed Boy#42, being served at a juice bar, and attending the Rainbooms' concert. As the ship sinks due to a magical thunderstorm, he is seen on the makeshift lifeboat created by Rarity's powers and propelled to a nearby island by Rainbow Dash.

"Is it just me or did things take a turn towards Weirdsville?"
— All's Fair in Love & Friendship Games

"I was thinking we could paint a model of DNA. It shows that we're smart but invites them in with the very fiber of our being."
— A Banner Day

"Hey, you did that on purpose! [gasps] My friendship algorithm!"
— A Banner Day

"Surely, brains, not brawns, are the secret formula for backstage success."
— All the World's Off Stage 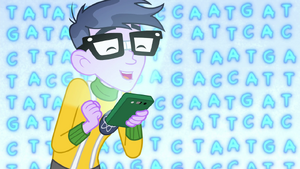 Retrieved from "https://mlp.fandom.com/wiki/Micro_Chips?oldid=2145286"
Community content is available under CC-BY-SA unless otherwise noted.