The Mirror Pool, also called the Mirror Pond, is an enchanted pool of water in the Everfree Forest with the power to duplicate whoever stands in front of it. Pinkie Pie uses the pool to duplicate herself in Too Many Pinkie Pies.

The Mirror Pool is a small pond of water located in an underground cavern in the Everfree Forest, connected to the surface via tunnel. The cavern walls surrounding the pool are covered in luminescent flowers and mushrooms.

In the season three episode Too Many Pinkie Pies, Pinkie Pie struggles to spend quality time with all of her friends at once. When Twilight Sparkle tells her the only way to accomplish this is if there are more of her to go around, Pinkie recalls the "legend of the Mirror Pool" told to her by her Nana Pinkie, which includes these rhymes:

"Where the brambles are thickest, there you will find
A pond beyond the most twisted of vines."
[...]
"And into her own reflection she stared,
Yearning for one whose reflection she shared,
And solemnly sweared not to be scared
At the prospect of being doubly mared."
— The Legend of the Mirror Pool

Venturing into the Everfree Forest, Pinkie Pie stumbles through some brambles and vines and finds herself in the Mirror Pool's underground cavern. By staring into her reflection and reciting the last part of the legend, she activates the pool's magic, and her reflection turns into a clone that climbs out of the water. This duplicate Pinkie is notably single-minded and obsessed with fun, repeatedly chanting the word "Fun!" in her speech, and she constantly gets the names of Pinkie Pie's friends wrong.

Pinkie Pie creates one clone of herself at first, but she later returns with the clone to create two more. The three Pinkie clones then create even more clones, making a minimum total of thirty-three. Pinkie Pie's duplicates cause general mayhem around Ponyville, such as ruining Applejack's barn-raising at Sweet Apple Acres and disturbing Rainbow Dash's nap.

The Mirror Pool briefly appears again in Pinkie Pie's dream in the season five episode Do Princesses Dream of Magic Sheep? In the season six episode The Saddle Row Review, Pinkie Pie alludes to her previous use of the pool. In the season seven episode Uncommon Bond, Starlight Glimmer breaks the seal on the Mirror Pool's entrance in order to show Sunburst, and Maud Pie's home cave is revealed to be adjacent to it. In that episode as well, Boulder is duplicated (offscreen) through use of the pool.

The Mirror Pool is mentioned in narration within chapter 1 of Pinkie Pie and the Rockin' Ponypalooza Party!, "Welcome, Spring-Sproing Springtime", and chapter 8 of Rarity and the Curious Case of Charity, "A Big Splash".

In the High Magic expansion set of Enterplay's collectible card game, the Mirror Pool is depicted on card #88 R, Dip in the Pool. 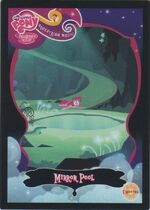 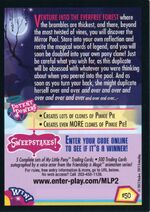 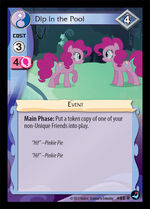