In Campfire Tales, Mistmane is the subject of a campfire story told by Rarity, and her tale is Rarity's and later Sweetie Belle's favorite legend. In the story, Mistmane is a talented sorceress renowned for her beauty and kindness. The love and attention she gets from her friends and family causes her best friend, Sable Spirit, to become jealous. While Mistmane is away at magic school, Sable casts a spell to make herself beautiful, but it backfires and makes her hideous instead. As a result, she decides to take beauty away from everyone and everything else, making herself empress and leading the village into a state of decline.

In School Daze - Part 1 and Non-Compete Clause, a bust of Mistmane appears in the School of Friendship. In A Rockhoof and a Hard Place, Mistmane is revealed to have become the official crystal landscaper of the Crystal Empire. She encourages the despondent Rockhoof not to give up hope about being unable to find a place in the present, and suggests he visit Mage Meadowbrook.

In The Ending of the End - Part 1, Mistmane and her fellow Pillars face off against Lord Tirek, but they are easily overpowered and drained of their magic due to Tirek being empowered by the Bewitching Bell. In Part 2, she and the Pillars keep Tirek, Queen Chrysalis, and Cozy Glow busy while Twilight's friends escape. She is later present during the final battle against the villains and helps the Mane Six and Young Six defeat them. In The Last Problem, Mistmane attends Twilight Sparkle's coronation ceremony. She also briefly appears in Rarity's group shot during The Magic of Friendship Grows.

In My Little Pony: Friendship is Magic Issue #84, Ocellus briefly takes on Mistmane's appearance as part of her school project. In Issue #101, she and Fluttershy work together to safeguard several animals and plants ahead of the Knights of Harmony attacking Canterlot. In Issue #102, Mistmane aids in the fight against the Knights, assisting the other Pillars in freeing Rockhoof and Flash Magnus from Morrigan's mind control and helping to finally defeat the Knights' leader Danu.

Young Mistmane and Mistmane are characters in Gameloft's mobile game, and Mistmane serves as a boss battle helper during the "Reflections of Harmony" event. Young Mistmane's in-game description states, "A smart, powerful unicorn sorceress, beloved for her kindness and beauty. She left her village behind to attend a prestigious magic school, but when trouble struck at home, she was ready to make a BIG sacrifice to save her loved ones!" Mistmane's in-game description states, "This legendary sorceress sacrificed her own outer beauty to save her homeland and help her friends -- but her inner beauty shone all the brighter for it." 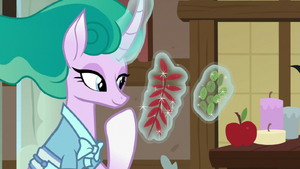