Misty Fly is a female Pegasus pony and a member of the aerial acrobatics group, the Wonderbolts. She first appears in Sonic Rainboom, and she has speaking roles in Rarity Investigates!, Newbie Dash, Top Bolt, and Grannies Gone Wild. She is named Icy Mist in some merchandise.

Misty Fly shares her coat color with Fluttershy, and her eye design with Rainbow Dash.

Misty Fly first appears in Sonic Rainboom, where she is one of the celebrity judges for the Best Young Flyer competition along with Spitfire and Soarin. Later in the episode, when Rarity plummets out of the sky, Misty Fly soars to her rescue only to get accidentally knocked out by one of Rarity's flailing hooves. Rainbow Dash saves her, and she approaches Rainbow afterward to thank her.

In The Best Night Ever, Misty Fly appears in the Wonderbolts' V.I.P. section at the Grand Galloping Gala.

She later appears in Sweet and Elite as one of the racers in the Wonderbolts Derby, though she does not appear at the start or finish line.

In Rarity Investigates!, Misty Fly appears as one of the central Wonderbolts featured. She has a speaking role, and she is addressed by name for the first time in the series.

In Newbie Dash, she appears with eyes revealed to be green and a different-sounding voice. Near the end of the episode, she tells Rainbow Dash that the Wonderbolts gave her the nickname "Dizzy".

In Top Bolt, Misty Fly appears at the beginning of the episode in the Wonderbolt Academy locker room and at the end informing Rainbow Dash about a "Wonderbolt emergency" at the Castle of Friendship. Her photo also appears in the classroom.

Misty Fly appears at the beginning of Grannies Gone Wild with Soarin and Fleetfoot, talking about the Wild Blue Yonder rollercoaster. In The Washouts, she appears flying with the other Wonderbolts over the Wonderbolt Academy.

Misty Fly is a character in Gameloft's mobile game, and serves as an enemy minion during the "Wonderbolt for a Day" event. The game's description of her states, "All stare in envy at this Wonderbolt vet. But she'll modestly say, 'You ain't seen nothing yet!'"

MISTY FLY never passes up a chance to show off for her fans and admirers. And she definitely has plenty of both. She's not one to boast, but in her opinion, she's the 'bolt to beat.

A partially translucent mini-figure toy and a collector card of Misty Fly were released together as part of the seventh wave of mystery packs in January 2013. According to the card, she "is a talented member of the WONDERBOLTS flying team!" Her name comes both from the card and from the packaging of the wave, which each list the name as a trademark. A mystery pack wave 7 image formerly displayed by a mystery pack listing on the website of the Greek company KAPSIS refers to Misty Fly as "Ice Wind".

A mini-figure of Misty Fly is included in the Target-exclusive Wonderbolts Cloudsdale Mini Collection under the name Icy Mist.

Beginning with The Maud Couple, Misty Fly was added to the opening intro with the rest of the Wonderbolts.

"Yeah, he's coming out of retirement to take the spot of honor in the center of our aerial flower formation tomorrow."
— Rarity Investigates!

"Who would do such a thing?"
— Rarity Investigates!

"And you did say you'd do anything to fly with Wind Rider."
— Rarity Investigates!

"Whoa, most awesome entrance by a newbie ever."
— Newbie Dash

"Dash! I've been looking all over for you! Wonderbolt emergency! We got to get back to HQ."
— Top Bolt 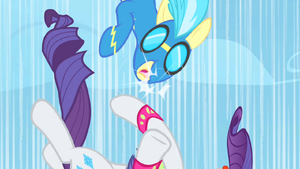