Molt Down is the eleventh episode of season eight of My Little Pony Friendship is Magic and the one hundred and eightieth overall. The title is a play on the word "meltdown".

In this episode, Spike undergoes a developmental stage for dragons called the "molt", and according to Smolder, its side effects compel a molter's family to kick them out of the house.

The concept of Spike having wings was first alluded to in Hot Minute with Rarity[1] and in Twitter conversation with Cathy Weseluck.[2]​[​specify​]​

This episode's roc—different than those of My Little Pony: Friendship is Magic Issue #24, The Curse of the Statuettes, and The Bestiary of Equestria—was designed by Kora Kosicka.[3]

The episode begins with Spike guiding Rarity to the phoenix nests in the woods. Rarity wishes to collect phoenix feathers for her latest fashion designs, and Spike decides to use the opportunity to visit Peewee. However, Spike behaves oddly around Rarity, hiding something on his face from her. When she notices and presses him, he reveals he has a red, itchy, pimple-like blemish called a stone scale.

Rarity tells Spike the occasional blemish is nothing to be embarrassed about and suggests asking Zecora for a medicinal cream to get rid of it. When Spike and Rarity find Peewee's parents and no Peewee, Rarity believes he moved out, saying everyone has to leave the nest eventually. Peewee suddenly arrives, fully matured, but when he and Spike share a hug, it irritates Spike's stone scale. Rarity again suggests seeing Zecora, but Spike is certain his stone scale will clear up after a good night's sleep.

The next morning, Twilight Sparkle wakes Spike up as he sleeps in late, and he discovers his stone scales have worsened to the point of covering his entire face. Like Rarity, Twilight suggests seeing Zecora about his breakout, but Spike refuses to leave the castle out of embarrassment. Twilight uses the opportunity to have Spike help her practice a school lecture, but Spike gets a sudden case of indigestion and accidentally burns Twilight's flash cards with his fire breath. While Twilight salvages her lecture from backup notes, she tells Spike to go somewhere where his fire breath won't cause any more unintended damage.

At the School of Friendship, Spike wears a disguise over his stone scale breakout so that no one recognizes him. Unfortunately, Rarity does recognize him, and she asks him to be a model for her new phoenix feather dress. Spike declines, claiming to be busy giving tours of the school. Pinkie Pie, who happens to be leading a tour group nearby, is thrilled to have the day off and lets Spike take over giving the tours.

As Spike hurries through showing the tour group around the school, his voice suffers random and extreme shifts in volume, causing him to speak either very softly or very loudly. His loudness disturbs the students in the library, and a sudden bout of indigestion causes him to burn through his own disguise and expose his stone scales to everyone around him. Smolder later finds Spike hiding in a school closet and recognizes his symptoms as a developmental stage for adolescent dragons called the "molt".

Smolder explains that the molt is different from greed-induced growth in that all dragons go through it during adolescence. Unfortunately, one of the main aspects of the "molt effect" is that the molting dragon will be kicked out of their home by their family. Because of what happened with Twilight earlier that morning, Spike fears he will end up being isolated and alone for the rest of his life, and Smolder also mentions the threat of predators such as rocs that will be drawn by his molt stench.

Spike finally turns to Zecora for a solution, and though she can't interfere with a dragon's natural development, she suggests fixing his body odor and vocal shifts so that he doesn't have to isolate himself from ponies. Just then, Rarity arrives at Zecora's hut, causing Spike to hide from her. Rarity has recently developed hearing problems, which Zecora identifies as a side effect of prolonged exposure to phoenix feathers. Zecora gives Rarity some medicinal ear drops and keeps her distracted before she discovers Spike's presence.

After Rarity leaves, Zecora finds Spike hiding under one of her masks outside the hut. However, he isn't hiding from Rarity—he's hiding from a ravenous roc that was drawn to the smell of his molt. The roc chases Spike and Zecora through the Everfree Forest, and Spike offers to keep it distracted while Zecora goes to get help. However, the roc quickly snatches up Zecora, and when Spike runs into Rarity in the forest, the roc snatches them up as well. Spike manages to free himself from the roc's claws with his fire breath, but Rarity and Zecora remain trapped in its clutches.

Spike's molt soon becomes so bad that he can't stop scratching himself. When Twilight appears, having planned to see Zecora about a remedy for Spike's stone scales, she discovers the danger that her friends are in. As Twilight flies up to attack the roc and save Rarity and Zecora, Spike's molt continues to progress. His uncontrollable itchiness subsides, but he suddenly gets encased in a stone-like cocoon. When the cocoon breaks, Spike emerges with a pair of dragon wings.

With his newfound ability to fly, Spike soars up to help Twilight save Rarity and Zecora from the roc. Spike distracts the roc and overwhelms it with fire, causing it to drop Rarity and Zecora, and Twilight and Spike swoop down to carry them to safety. While Twilight, Rarity, and Zecora are overjoyed by Spike's new wings, Spike is saddened that going through the molt means he'll have to leave his home as part of the "molt effect".

Twilight doesn't want Spike to leave, saying they don't have to abide by typical dragon customs. She explains that growing up will not change who Spike is inside, and whatever happens in the future, they will get through it together. Spike joyfully hugs Twilight and takes his new wings out for a test drive. Some time later, Spike models Rarity's phoenix feather dress as she previously requested, and Rarity is excited that Spike's new flying ability makes him an even better fashion model than before.

Spike: It's a stone scale. It isn't magical or anything like the call of the Dragon Lord. It's just... red. And itchy. [groans] And embarrassing.
Rarity: Ooh, precious pants, that does look uncomfortable. But even I get the odd blemish from time to time. It's nothing to be embarrassed by. You could pay Zecora a visit. She makes a cream that works wonders. Just don't get the shampoo.

Twilight Sparkle: I used to get terrible breakouts any time I had a final exam with Celestia. Who probably never had a blemish her whole life.

Rarity: Sorry, you'll have to speak up. My ears are a little bit clogged or something.

Smolder: [laughs] Wow! I have seen some pretty bad molts in my time, but yours takes the cake!
Spike: Molts?
Smolder: The molt? Super painful stone scales, fire burps, uncontrollable volume shifts? It's all part of growing up dragon.

Smolder: That molt stench is a magnet for predators. Tatzlwurms, hydras, rocs...
Spike: Dragons are scared of rocks?
Smolder: R-O-C-S. Rocs? Humongous birds of prey that can snack on a molting dragon like candy!

Zecora: The feathers of that bird can affect ponies' ears. It's a magic ailment I've treated for years.
Rarity: [loudly] I only know you're talking 'cause your mouth is going up and down.

Spike: Did I forget to mention the molt smell attracts predators?
Zecora: That's something that would've been quite nice to know! But it's not worth discussing right now! We should go!

Spike: If my stone scales didn't itch so much and we weren't in immediate danger, this would be [chuckles] really embarrassing!

Zecora: I know that the molt produced surprising things. But I'm glad that the last was a new pair of wings!
Rarity: [loudly] Yes! And also, I'm glad you've got wings!

Twilight Sparkle: I don't need to carry you anymore, do I? You have wings.
Spike: They are new, and I don't want to overdo it. 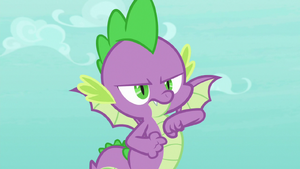