Moon Dancer, or Moondancer, is a female unicorn pony who is first mentioned in Friendship is Magic, part 1, physically appears in the IDW comics, and makes her in-series debut in Amending Fences. She has a light yellowish gray coat, red mane and tail with purple highlights, purple eyes, and a cutie mark of a crescent moon and three stars. Her name is spelled "Moon Dancer" in Amending Fences' closed captioning and with a trademark symbol in Playskool merchandise and "Moondancer" in Amending Fences and The Point of No Return's ending credits, in the comics, in Gameloft's mobile game, in Friendship is Magic, part 1's closed captioning, in Princess Twilight Sparkle and the Forgotten Books of Autumn, and sometimes with a trademark symbol in Enterplay's collectible card game.

Moon Dancer was designed by Kora Kosicka.[2] She shares her mane and tail style with Twilight Sparkle.

Moon Dancer shares her name with a G1 unicorn and a G3 Earth pony, and her design is based on the G1 unicorn. Concurrently with G4, G1 Moondancer has been reintroduced in IDW Publishing's Transformers vs. G.I. Joe Issue #13.

Moon Dancer is first mentioned in Friendship is Magic, part 1 by Twinkleshine and Spike. Twinkleshine says to Twilight Sparkle that "Moon Dancer is having a little get-together at the west castle courtyard," but Twilight declines the invitation to focus on her studies. Spike later accidentally ruins a gift for her after being knocked aside by Twilight.

Moon Dancer makes her first in-show appearance in Amending Fences. She is shown to be an asocial recluse, living alone in a dilapidated Canterlot house and focusing only on her studies. As a filly, she was friends with Twilight Sparkle. Twilight learns that after not showing up to the party Moon Dancer had thrown in the first episode, Moon Dancer became heartbroken and withdrawn, rejecting friendship altogether.

Twilight approaches Moon Dancer as a potential friend and appears to reach her at first due to the two's mutual love of learning and Twilight offering Moon Dancer the use of her old library home, but Moon Dancer eventually snubs her. After being lured to a party reminiscent of the one she had thrown, Moon Dancer vents her pent-up frustrations at Twilight. Twilight apologizes for the hurt she caused, and Moon Dancer comes to accept friendship once more. She is last seen playing a ball game with Twinkleshine, Lemon Hearts, and Minuette.

In The Cutie Re-Mark - Part 1, Moon Dancer sits next to Spike during Twilight's speech, waking him when he falls asleep while changing slides.

In Flutter Brutter, Moon Dancer is depicted in a photograph in Pinkie Pie's wallet.

The photo of Moon Dancer on Twilight's mirror appears in School Daze - Part 2.

Moon Dancer is seen amongst King Sombra's brainwashed minions in The Beginning of the End - Part 2. She and several others attempt to attack the Mane Six, but are trapped in a net. She also appears in The Point of No Return, having lunch at The Tasty Treat along with First Folio, the two telling Twilight what happened to Dusty Pages.

In The Ending of the End - Part 2, Moon Dancer takes shelter with other unicorns inside the School for Gifted Unicorns as Canterlot closes itself off from the other pony races. She also takes part in the final battle against Queen Chrysalis, Lord Tirek, and Cozy Glow after being encouraged by Raspberry Dazzle. In The Last Problem, Moon Dancer attends Twilight's coronation ceremony. She also briefly appears in Twilight's group shot during The Magic of Friendship Grows.

In My Little Pony The Movie, Moon Dancer appears very briefly in town and on a bridge during We Got This Together without her sweater on and her mane once again resembling Twilight's.

In the My Little Pony Annual 2013 story "The Fall of Sunset Shimmer", Moon Dancer appears on page 2 as a student at Princess Celestia's School for Gifted Unicorns. When Sunset Shimmer insensitively snubs her and several other unicorns, Moon Dancer remarks that Sunset "wasn't very nice."

Moondancer[sic] plays a minor supporting role in Princess Twilight Sparkle and the Forgotten Books of Autumn, still living in Twilight's old library. The book also mentions her father used to work for the Canterlot Historical Society.

Moon Dancer appears in a photograph in episode 10 of Baby Flurry Heart's Heartfelt Scrapbook, "The Magic of Friendship".

Moondancer[sic] is a character in Gameloft's mobile game, and serves as an enemy boss during "The Crowning Achievement" event. The game's description of her states, "Moondancer is one beautiful pony, who started to think all friendship was phony! It was a story that could've been tragic -- but with Twilight's help, she learned that friendship is magic!"

MOONDANCER was one of Twilight Sparkle's earliest friends, but after Twilight blew off her party, she turned into a recluse, giving up on friendship entirely. She's since come around, thanks to Twilight's heartfelt apology, and has a load of friends!

A mini-figure of Moon Dancer was released by Playskool in 2015 as part of its Playskool Friends My Little Pony line of toys.

A mini-figure toy and collector card of Moon Dancer are included in the twenty-first wave of mystery packs.

"Why won't you leave me alone? I'm trying to study! You've got the wrong pony! I don't have parties!"
— Amending Fences

""To my friend, Twilight Sparkle. Thanks for introducing me to the classics." I can see by the fact that you left it here that it meant a lot to you."
— Amending Fences

"Dah! I gave friendship a chance a long time ago! It didn't work out then, it isn't gonna work out now!"
— Amending Fences

"Thank you for helping me make some new friends. Even if they are my old friends."
— Amending Fences 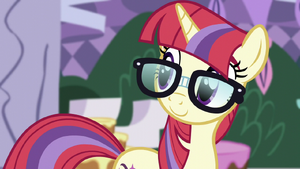