For the similarly-named Pegasus pony and creatures, see mlw:G4 Breezie and Breezies.

Mr. Breezy is a male Earth pony who appears in the episodes The Show Stoppers and It Isn't the Mane Thing About You. He has a light brown coat, orange mane and tail, light blue eyes, and a cutie mark of an electric fan, and he wears a green tam o' shanter and vest.

Mr. Breezy is named similarly to Breezie, a Pegasus mare with a G3 Earth pony counterpart, and Breezies, a race of small magical creatures.

Mr. Breezy's first appearance is in the season one episode The Show Stoppers. He loans one of his fans to the Cutie Mark Crusaders as they prepare for a talent show.

He appears again in the season seven episode It Isn't the Mane Thing About You. Rarity gives him advice on how to attract more customers to his fan shop. In this appearance, he speaks with an Irish brogue.

Mr. Breezy is a playable character in Gameloft's mobile game, made available in the St. Patrick's Day update on March 12, 2013. His in-game description states, "Mr. Breezy is a kind and gentle pony that likes to help everyone. His cutie mark is a fan."

In Enterplay's collectible card game, card α #91 R of Mr. Breezy gives him the description "Nopony in Equestria has a wider knowledge of corny wind-related jokes than Mr. Breezy."

"I don't. Uh, but I could make you one! It's not like I've got anything else to do."
— It Isn't the Mane Thing About You

"Well, I owe it all to Rarity."
— It Isn't the Mane Thing About You

"Kindness has nothing to do with it! Rarity always knows how to make something look its best. Probably because she looks so good herself! That ain't something us non-fabulous folk here can understand."
— It Isn't the Mane Thing About You 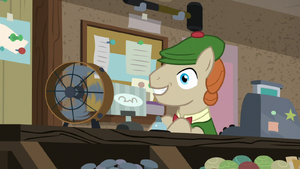 Retrieved from "https://mlp.fandom.com/wiki/Mr._Breezy?oldid=1956781"
Community content is available under CC-BY-SA unless otherwise noted.