Mr. Greenhooves is a background Earth pony with a faded brown coat and a dark gray mane and beard.

Mr. Greenhooves was designed by My Little Pony Friendship is Magic art director Ridd Sorensen. Mr. Greenhooves was to appear in The Ticket Master.[1] His name is not spoken on-screen until Putting Your Hoof Down; Sorensen refers to him as "Hayseed Pony" and simply "Hayseed" in a May 2011 post on DeviantArt, which has since been removed. He also refers to him as "Hayseed" in the audio commentary for The Best Night Ever. He sometimes holds a stalk of wheat grass in his mouth, which was originally intended to be a corncob pipe that produces popcorn, with Spike eating the popcorn as a gag for the show; the pipe was nixed by Standards and Practices. His hat is a nod to Craig McCracken's Wander Over Yonder,[note 1] and is one of the available hat designs in the game PonyMaker. In any of his appearances, he appears to have no cutie mark; Sorensen has stated that he "didn't include one on his original design because he had a blanket over his flank, but if we ever add one it will probably be a blade of wheat."[2]

He first appears in Boast Busters, pulling a wagon filled with bales of hay. He can be seen with his wagon in tow on three other occasions: briefly in establishing shots in Bridle Gossip and The Return of Harmony Part 1; and in Feeling Pinkie Keen, splashing mud on Twilight Sparkle as he trots past.

In The Best Night Ever, Fluttershy follows what she believes to be bird song, only to find out it's Mr. Greenhooves whistling while he tends to the gated gardens of Canterlot. Both the tune he whistles and the line "whistle while I work" are references to Disney's Snow White. He later sets off the trap Fluttershy constructed to catch some animals.

He also appears in Putting Your Hoof Down, watering some of Fluttershy's flowers. Fluttershy addresses him as "Mr. Greenhooves" and soaks him in water when he disagrees with her that he over-watered her petunias again.

In Apple Family Reunion, he makes two appearances during the song Raise This Barn. In Pinkie Pride, he appears briefly among the ponies and buffalo of Appleloosa.

Mr. Greenhooves is a character in Gameloft's mobile game. The game's description of him states, "A friend to all flowers, you'll hardly see him smirk. But this country pony loves to whistle at work." 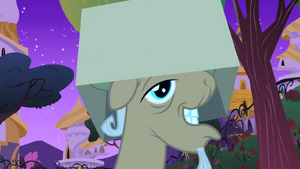