Mr. Stripes and Plaid Stripes first appear in the season six episode The Saddle Row Review, prior to the grand opening of the Manehattan branch of Rarity's Carousel Boutique, Rarity For You. Mr. Stripes owns the building where Rarity For You is located, charging Rarity rent to open her new store. As a very pushy pony, he tells Rarity to give his daughter Plaid Stripes a job in the store and threatens to raise her rent drastically if she doesn't.

In her position as one of Rarity's salesponies, Plaid Stripes begins pushing her bizarre and outlandish store ideas upon Rarity and her friends, such as selling glow-in-the-dark teeth instead of clothes, replacing the bell on the boutique's front door with one of her father's antique horns, and selling clothes made out of spoons. While Rarity focuses on setting up the store's window display, Applejack fields all of Plaid's ideas. Though Applejack likes Plaid's spoon clothes idea, she refuses to implement them, believing that Rarity wouldn't want them. This causes Plaid to get tearfully upset and involve her angry father.

In the end, however, Plaid gets to unveil her spoon clothes during Rarity For You's grand opening, and she is last seen using spoon gloves to drink soup.

In The Last Problem, Plaid Stripes briefly appears in Rarity's group shot during The Magic of Friendship Grows.

Mr. and Plaid Stripes appear in a flashback of The Saddle Row Review in A-Dressing Memories.

In My Little Pony/Transformers Issue #1, Plaid Stripes appears on pages 11-12 forced into servitude by the Decepticon Starscream after Queen Chrysalis brings the Autobots and Decepticons of Transformers to Equestria.

Plaid Stripes appears in episode 1 of Rarity's Peek Behind the Boutique, "Fashion Do's and Don'ts".

Enterplay trading card series 4 #29, a card of Mr. Stripes & Plaid Stripes, lists their names with trademark symbols and gives them the description, "Mr. Stripes like miniature doll furniture, but not nearly as much as he loves his daughter, Plaid Stripes! He owns the building that Rarity is renting for her Manehattan boutique location, and he can be a little pushy at times—all of the times! Plaid Stripes seems to have picked up some habits from her father—when she gets a 'good idea', she doesn't let it go until other ponies try it out! Her influence helped make Rarity's Manehattan boutique opening her most unique ever."

In the Defenders of Equestria expansion set of Enterplay's collectible card game, card #45 R of Plaid Stripes lists the quote "Today? Spoon clothes. Tomorrow? Glow-in-the-dark teeth. Next Thursday? The world!", and card #70 U of Mr. Stripes lists the quote "You will want to do as I say. Trust me, it is for the best. Your alternatives are... eh, not so good."

Mr. Stripes: Rarity! So good to see you! Your store, it's going to be a very good place, I think! [laughs]

Mr. Stripes: You've met my daughter, the apple of my ear, the hay in my hoof? You will let her work with you.
Rarity: [chuckles nervously] It's just, I'm dreadfully busy preparing for tonight's grand opening, as you can see.
Mr. Stripes: There are only two things I love more than being pushy. One is my daughter. The other is miniature doll furniture. And I would sell my entire mini-furniture collection to make my daughter happy. You understand?

Mr. Stripes: Let me say another way... Hire her or I raise rent until you no can afford!

Plaid Stripes: [loudly] First idea! Instead of clothes, we sell glow-in-the-dark teeth! Like this. [chomp, chomp] But they glow in the dark!

Plaid Stripes: You know how most stores have a little jingle-bell when the door opens? Ahem. I thought we should have something with a little more pizzazz! So, I installed one of Daddy's antique horns. 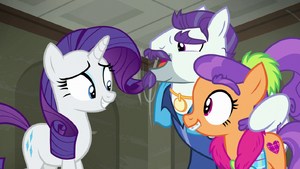