Mr. Waddle is a background Earth pony who appears in several episodes of the show. He is an elderly pony with a light gray coat, a dark gray combed-over mane of several strands of hair, large, thick-rimmed round glasses, varying neckwear, liver spots, and a cutie mark usually of a bubble pipe, sometimes of three pipes, and rarely of an oil derrick. He shares his design with "Pipe Down".

Mr. Waddle was designed by My Little Pony Friendship is Magic character designer Rebecca Dart, who stated in an interview[1] that she designed a bespectacled old male pony, and mentioned on Twitter[2] that the pony in question was designed as "Incidental Senior Pony #3". According to Tabitha St. Germain on Twitter, Mr. Waddle may have been voiced by an animator.

He makes his proper series debut in The Mysterious Mare Do Well wearing a bow tie. When a balcony that he and other elderly ponies are standing on breaks and falls, they are saved by Rainbow Dash.

In Hearts and Hooves Day, Mr. Waddle is seen at a funeral service during The Perfect Stallion, wearing a clerical collar. As Sweetie Belle sings about finding a very special somepony for Cheerilee, she remarks about Mr. Waddle "this one's too old". He later appears in a wide shot of Ponyville wearing his original bow tie while standing with "Chelsea Porcelain".

Waddle appears again at the beginning of A Friend in Deed, wearing a large, polka dotted bow tie. When Pinkie Pie passes him by, she compliments his bow tie and he blushes. He appears in A Canterlot Wedding - Part 2 during This Day Aria, Part 1, again wearing his original bow tie while standing next to "Chelsea Porcelain" in the wedding audience.

Mr. Waddle appears as part of the crowd outside the Golden Oak Library in Too Many Pinkie Pies, and he also appears in Ponyville watching Scootaloo jump off a ramp on her scooter in Sleepless in Ponyville.

Mr. Waddle appears in Pinkie Pride during The Super Duper Party Pony, as Cheese Sandwich spontaneously claims that he enjoys partying. In Leap of Faith, he appears in the audience for Flim and Flam's Miracle Curative Tonic demonstration. In Trade Ya!, he attends the Rainbow Falls traders' exchange. In Equestria Games, he appears in the Crystal Empire stadium spectating the titular event beside other elderly ponies.

In On Your Marks, Mr. Waddle appears as a patient having his heart auscultated by a doctor as the Cutie Mark Crusaders watch. In The Saddle Row Review, he appears as a diner patron during Fluttershy's interview segments.

In The Perfect Pear, Mr. Waddle appears as a young stallion in multiple flashbacks. In It Isn't the Mane Thing About You, he appears in Mr. Breezy's store admiring the fans. In Once Upon a Zeppelin, he appears as one of the zeppelin cruise attendees.

In School Daze - Part 1, he appears as a member of the Equestria Educational Association. In Grannies Gone Wild, he is among the elderly ponies seen visiting Flim and Flam's resort.

In The Point of No Return, he is seen playing the trumpet in a band at the Silver Shores retirement community.

Mr. Waddle's human counterpart briefly appears in the Shake Things Up!, as a customer at an orange juice bar at the Canterlot Mall, and Coinky-Dink World, in which he dances with Pearly Stitch at the Sweet Snacks Café.

In Display of Affection, Mr. Waddle appears looking at Flansky's graffiti on the side of a building. In Road Trippin, he makes a background appearance attending Goldie Delicious' party.

In Rollercoaster of Friendship, Mr. Waddle makes a background appearance as an Equestria Land patron walking towards the park's light parade.

In Spring Breakdown, Mr. Waddle appears as a Luxe Deluxe spring break cruise passenger. He appears at the buffet with "Chelsea Porcelain", in the theater watching Trixie's magic show with Sand Trap, and attending the Rainbooms' concert. As the ship sinks, he is rescued by the Equestria Girls and transported to a nearby island.

In the "Dashing Through the Mall" segment, Mr. Waddle makes a brief cameo shopping at the Canterlot Mall.

Mr. Waddle is a character in Gameloft's mobile game. The game's description of him states, "This sweet old stallion wears a polka-dot tie. You can make him blush with the bat of an eye."

In the Enterplay collectible card game's expansion set Absolute Discord, card #46 R of Mr. Waddle lists his name with a trademark symbol and gives him the description "At least he doesn't snore." For the same set, a digital card of The Smooze shows Mr. Waddle as in Make New Friends but Keep Discord.[3]

Mr. Waddle: Everypony partner up! It's time for the Summer Wrap-Up Festival Games! 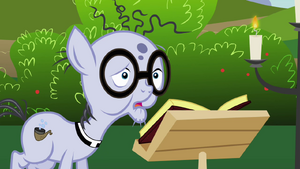