Mr. and Mrs. Shy are the married Pegasus pony parents of Fluttershy and Zephyr Breeze. They appear in the season six episode Flutter Brutter, and they are alluded to in other media.

Mr. and Mrs. Shy appear in the season six episode Flutter Brutter, having invited their daughter Fluttershy and Rainbow Dash to lunch. Mr. Shy is a retired weather factory worker and cloud collector, and Mrs. Shy is a gardener. The two are portrayed as timid and soft-spoken like Fluttershy, such that they consider Fluttershy to be the bold one in their family.

Mr. and Mrs. Shy hint to their daughter that they have allowed Zephyr Breeze—their son and Fluttershy's younger brother—to move back in with them, which they have done on several previous occasions. Fluttershy expresses worry about this arrangement because, due to their meekness and Zephyr Breeze's obnoxious personality, he has a history of freeloading off of them and having his way with their household.

When Zephyr moves back in with his parents, his presence causes an immediate disruption; he discards his father's cloud collection and uproots his mother's garden to make room for a personal art studio/meditation patio. This prompts Fluttershy's intervention, and she compels him to move out. The typically submissive Mr. and Mrs. Shy agree with their daughter, despite how upset it makes them to see their son leave.

Near the end of the episode, Mr. and Mrs. Shy are pleased by Zephyr's newfound drive and determination and proud of his accomplishment in graduating from mane therapy school. Mrs. Shy is also under the false impression that Rainbow Dash reciprocates Zephyr's attraction to her.

They are mentioned indirectly by Fluttershy in A Health of Information.

Fluttershy's parents are indirectly mentioned on page 7 of the My Little Pony: Equestria Girls Holiday Special comic. Rainbow Dash says to Fluttershy, "You know, I don't think I've ever met your family." and Pinkie Pie interrupts Fluttershy before she can talk about them.

Mr. and Mrs. Shy physically appear on page 24 of the My Little Pony Holiday Special 2017 comic.

In the Defenders of Equestria expansion set of Enterplay's collectible card game, card #51 R of Mr. and Mrs. Shy gives the description "When some ponies say, "Come back home anytime, dear, you're always welcome," they mean it more than others." In the Seaquestria & Beyond expansion set, card #82 U of Applejack and Fluttershy gives the description "Fluttershy's parents got her swimming lessons when she was just a filly. Who knew they would pay off so well?"

Mr. Shy: I have my clouds, your mom has her flowers, you've got your animals, and your brother...
Mrs. Shy: Zephyr Breeze has his... interests. [nervous laugh]

Mr. Shy: Well, we may not be as bold as you, Fluttershy, but don't you worry. We know how to stand up for ourselves.

Mr. Shy: [to Zephyr Breeze] You know we love you, son, but your sister has a point.

Mrs. Shy: [to Rainbow Dash] Thank you, dear, for not giving up on Zephyr. After all these years of pining for him, it must be so satisfying to see him on the right track. 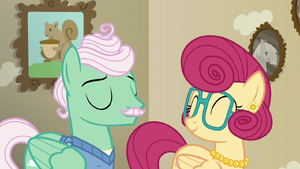 Retrieved from "https://mlp.fandom.com/wiki/Mr._and_Mrs._Shy?oldid=2047541"
Community content is available under CC-BY-SA unless otherwise noted.