Ms. Harshwhinny is a female Earth pony who is mentioned by title in the season three episode Just for Sidekicks and first appears in Games Ponies Play. She is the real Equestria Games inspector whom Ms. Peachbottom is mistaken for.

During the week leading up to the premiere of the episode Games Ponies Play, story editor Meghan McCarthy wrote on Twitter that the original name for a new character introduced in the episode was Ms. Peachbottom,[2] referring to the Equestria Games Inspector.

In the episode Just for Sidekicks, Fluttershy mentions the Head of the Equestria Games, referring to Ms. Harshwhinny.

Ms. Harshwhinny appears in the episode Games Ponies Play, as the Equestria Games Inspector. She has apparently built a reputation for being a stickler and perfectionist when scouting hosts for the Games, but dialogue toward the end of her debut episode suggests she's simply putting on airs for the purposes of her profession.

As a result of Ms. Peachbottom being mistaken for the Games Inspector, due to them having similarly themed luggage, Ms. Harshwhinny is left standing at the train station, to the point where she's forced to find her way to the castle herself. Along the way, she is splashed on by puddle water on at least two occasions. She is later seen getting a hooficure at the spa. There, she strikes up a conversation with Ms. Peachbottom, who tells her of the warm welcome she received upon arriving at the Crystal Empire. When she's alerted to the presence of Princess Cadance, Ms. Harshwhinny is quick to voice her frustration, to Cadance's confusion. But after hearing about Ms. Peachbottom's day, courtesy of Twilight Sparkle and her friends, she passes approval on the Crystal Empire as the host of the Equestria Games.

Ms. Harshwhinny has a different facial structure than other ponies: she has a longer muzzle and shorter ears. She is usually seen with a grumpy demeanor.

Ms. Harshwhinny appears again in Flight to the Finish. Miss Cheerilee introduces her as "The head of the Equestria Games" when she comes to the school to announce the competition for who would the flag-bearer for Ponyville at the upcoming games. She is also seen later in the episode as one of the judges of the competition, alongside Rainbow Dash. She constantly rebukes Rainbow for not keeping her emotions "in check" and not meeting her standards of professionalism. However, despite this, and her criticism of Rainbow not maintaining a similar attitude, at the end of the episode she drops her demeanor, describing the Cutie Mark Crusaders' act as "totally stupendously the single most amazing thing [she's] ever seen". She then acts sheepish upon Rainbow parroting her earlier remarks back at her.

Ms. Harshwhinny appears in Equestria Games. She tells Spike of the procedure for lighting the Games torch. When Spike is frozen with stage fright, she pushes him to go on. Twilight lights the torch for Spike, unbeknownst to all, leaving Ms. Harshwhinny wondering how he did it. When Spike later asks if he can do anything else, Ms. Harshwhinny sarcastically suggests he put on a rock concert.

In Flutter Brutter, when asked to guess who was at Fluttershy's parents' house for lunch, Ms. Harshwhinny is one of Pinkie Pie's incorrect guesses.

When overseeing the Equestria Games, Ms. Harshwhinny is a stickler for professionalism. Though her harsh exterior appears foalproof, she does have a softer side.

On April 10, 2014, Twilight Sparkle announced on Hasbro's My Little Pony Facebook page that Ms. Harshwhinny would take over said page during the Equestria Games,[3] which happened.​[​specify​]​

In the "My Favorite Teacher" section of the My Little Pony Equestria Girls: Canterlot High Tell-All (Replica Journal), Fluttershy writes that her favorite teacher is "Mrs. Harshwhinny. When she shows her softer side."

Ms. Harshwhinny is portrayed as very stern and somewhat irritable. However, underneath her harsh exterior, she has a softer side and is clearly dedicated to making the Equestria Games successful. She is wise enough to learn about places from more than what is shown in official presentations, and she was demonstrably enthusiastic about the Cutie Mark Crusaders' audition to be flag-bearers.

"Every city and empire wants to host the Equestria Games. So I have to go through all the big phony-baloney song and dance, though of course I'm never getting the real inside scoop."
— Games Ponies Play

"Princess Cadance? So, this is where you've been! I will have you know this is by far the worst welcome I've had in all my years!"
— Games Ponies Play

"I just finished hearing about how this pony was just treated to the warmest, finest, most fabulous reception she ever had. Courtesy of these fine ponies right here. Which, in my expert opinion, amounts to the first ever unvarnished, unrehearsed, and unbiased appraisal of a potential host of the Equestria Games."
— Games Ponies Play, referring to Ms. Peachbottom with "this pony"

"Ms. Dash, will you please curb your over-enthusiastic outbursts?"
— Flight to the Finish

"Acceptable? Acceptable?! Why, it was totally stupendously the single most amazing thing I've ever seen!"
— Flight to the Finish

"This is the signal...I'm giving you the signal now!"
— Equestria Games

"All right, everybody, settle down... ...I'm Harshwhinny, and some of you might also have me for social studies."
— Human version, My Little Pony Annual 2013 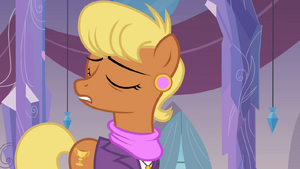