Ms. Peachbottom is a female Earth pony who appears in Games Ponies Play and makes cameo appearances in Rarity Takes Manehattan, Equestria Games, and Uncommon Bond. She is mistaken for the Equestria Games Inspector by Rainbow Dash and her friends as they take her on an in-depth tour of the Crystal Empire over the course of the episode. She is unnamed in the show, but she is named in home media closed captioning and other depictions.

Ms. Peachbottom first appears in the episode Games Ponies Play when she is mistaken for the Equestria Games inspector, Ms. Harshwhinny, due to her luggage having a flower motif, which was the only information the Mane Six were given by Princess Cadance in order to find her. During her visit, she enjoys the warm welcome she is given as well as her tour of the castle, despite having more knowledge of architecture than her guides.

Later on in the episode, when she explains she is only a tourist from Mustangia and not the Games inspector, the ponies go on a panicked rush to find the real Games inspector. She meets the real inspector at the spa and tells of the wonderful welcome she received, convincing the inspector to choose the Crystal Empire as the next host of the Equestria Games after conversing with Princess Cadance and the ponies.

Ms. Peachbottom is shown to be exceptionally warm and friendly as well as athletic, outrunning a number of the runners on the Crystal Empire track team. She is also surprisingly knowledgeable when it comes to architecture, and she is implied to be claustrophobic (afraid of enclosed spaces) and altocelarophobic (afraid of high ceilings), as she becomes extremely anxious when she enters the Crystal Palace interior.

Ms. Peachbottom also makes a very brief appearance in the season four episode Rarity Takes Manehattan, standing in line to see Hinny of the Hills. In the episode Equestria Games, she is barely seen in the audience as Spike attempts to light the torch.

"My golly, the crystal castle! Why, I've seen pictures but I never expected to see it with my very own eyes! [gulp] From the inside..."
— Games Ponies Play

"Nothing like a great run to shake the cobwebs off these old bones!"
— Games Ponies Play 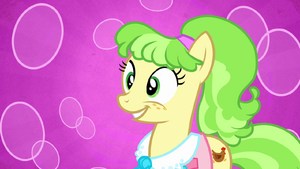