Mudbriar is a male Earth pony and Maud Pie's boyfriend who first appears in the season eight episode The Maud Couple.

In The Maud Couple, Mudbriar first appears in a bakery supply shop when Pinkie Pie unintentionally cuts in front of him in line. To Pinkie's annoyance, he takes a long time to finish his business with the shopkeeper, trying to decide between saying "Goodbye" or "See you later" and giving a long-winded explanation of how the two sayings are different. By the time he finishes his business, the shopkeeper has left for lunch, leaving Pinkie unable to buy anything.

Outside the shop, Pinkie's sister Maud introduces Mudbriar as her new boyfriend, the two having met during an exhibit on petrified wood and finding they had a lot in common. Mudbriar's strange quirks and behavior irritate Pinkie, and she wonders what Maud sees in him. At Starlight Glimmer's encouragement, Pinkie works together with Mudbriar to plan Maud's upcoming birthday party and get to know him better. However, he continues to annoy Pinkie with his mannerisms, and Pinkie takes offense to the implication that he knows Maud better than she does.

Pinkie's distress over the strain that Mudbriar's presence places on her relationship with Maud drives her to run away to her family's rock farm. Her other sisters Limestone and Marble tell her that despite how frustrated Mudbriar makes her, how happy he makes Maud is most important. Pinkie returns to Ponyville to make amends with Mudbriar, and they make their shared vision of Maud's perfect birthday party a reality.

In The Break Up Break Down, Mudbriar appears spending time with Maud during Hearts and Hooves Day.

In the holiday special My Little Pony Best Gift Ever, Mudbriar appears celebrating Hearth's Warming Eve with the Pie family and Apple family.

In Student Counsel, Mudbriar throws a "Spring Solst-astic" party with Maud, and later accompanies her, Starlight, Trixie, Sunburst, and Terramar on the search for Silverstream. His knowledge of pine trees helps them locate the flock of cockatrices (which Silverstream was studying), but he is soon turned into stone. He is later restored by a cockatrice named Edith, and claims to developed a deeper appreciation for rocks as a result of his experience.

In A Trivial Pursuit, Mudbriar participates in the Trivia Trot contest alongside Maud. Twilight notes that the two are often a team (despite the teams being chosen by random selection). He manages to win a point over Twilight by pointing out that it was Lord Tirek and Scorpan who came to Equestria to steal its magic, rather than just Tirek as Twilight claimed.

In The Big Mac Question, Granny Smith mentions Mudbriar being in her dream. In The Ending of the End - Part 2, Mudbriar appears taking shelter with Maud and other Earth ponies as Ponyville closes itself off from the other pony races. In The Last Problem, Mudbriar attends Twilight Sparkle's coronation ceremony and briefly appears in Pinkie Pie's group shot during The Magic of Friendship Grows, both times alongside Maud.

Mudbriar is a character in Gameloft's mobile game. His in-game description states, "Maud Pie's special somepony can be a bit of a stick in the mud (and he'll tell you at great length what kind of stick it is), but he's a great partner and a great pony all the same."

Similar to Maud, Mudbriar is portrayed as very stoic (although slightly more emotive) and occasionally literal. He has a tendency of pointing out technicalities, and he has a great interest in and knowledge of sticks—calling any mistreatment of sticks "stick abuse". He also appears to have a well-developed memory, able to recall details of things from what he calls his "mind palace". Also like Maud, Mudbriar has an inanimate object for a pet: a stick named Twiggy.

Mudbriar is shown to be very close with Maud, making her interests his interests, talking about her positively to others, having an entire "room" of his "mind palace" dedicated to things she likes, and at the end of his debut, he is happy to be friends with Pinkie Pie through their shared interest of making Maud happy.

In his first appearance, Mudbriar was oblivious to how his corrections could often annoy those around him. As of Student Counsel, however, he is more aware of this, and open to apologizing for it.

"I will not apologize for speaking with precision."
— The Maud Couple

"Due to the speleothems growing from the ceiling, this is more of a cavern than a cave. Maud taught me that."
— The Maud Couple

"It sounds like she was protecting your feelings. She's very caring that way."
— The Maud Couple

"This isn't even an olive branch. It's a quercus, most likely castaneifolia. [...] And I love a good quercus. Friends?"
— The Maud Couple

"I wasn't going to say anything, but these flowers are just glued on, so technically, it wasn't perfect already. [beat] But that's probably not important."
— Student Counsel

"Technically, it's a kind of category where we know the answers and you don't."
— To Twilight Sparkle, A Trivial Pursuit 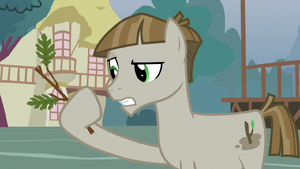