Mulia Mild is a female mule and a baker who appears in MMMystery on the Friendship Express and Equestria Games. Her name and appearance are references to real-life chef Julia Child, the same basis as S06E12 Unnamed Unicorn Mare #5. The fact that mousse is French in origin may also be a reference, as Julia Child is known for popularizing French cuisine in America.

Mulia first appears in the episode MMMystery on the Friendship Express aboard the train to Canterlot. She boasts about her "mousse moose", claiming it will win first prize at the National Dessert Contest. The next morning, Mulia comes under suspicion when the Cakes' cake is damaged. Pinkie Pie accuses Mulia of sabotage, creating a vivid fantasy of Mulia, clad as a ninja, knocking Pinkie out and slicing up the cake, which reduces Mulia to a quivering wreck.

After Pinkie's theories are disproved, the rest of the bakers' confectioneries are mysteriously eaten. Pinkie eventually discovers that the bakers had eaten each other's work, pointing out donut sprinkles in Mulia's wrinkles. Mulia apologizes to Donut Joe, the donut dish's baker, saying that Pinkie had made them sound so good earlier. At Pinkie's suggestion, Mulia and her fellow bakers combine what remains of their work into a single cake, which wins first prize.

Mulia Mild makes a brief cameo in Equestria Games, in a slightly blurry sweeping shot of the Crystal Empire stadium. 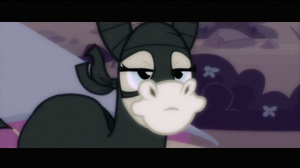