My Little Pony: Pony Life is an animated series based on Hasbro's My Little Pony franchise that premiered on Discovery Family[1][2] on November 7, 2020,[3] and on YouTube.[4] It is a re-imagining of My Little Pony Friendship is Magic, featuring the same main cast of characters and with all their voice actors reprising their roles, but it uses a new animation style and has a heavier focus on slice-of-life stories with a more comedic tone.[5]

"The new MY LITTLE PONY: PONY LIFE show looks at the funny side of friendship. The new center of the world is Sugarcube Corner – just like going to a friend's house after school, this is our ponies' home away from home. Here, Pinkie Pie serves up frosted cupcakes to the best customers in the world—her friends! PONY LIFE episodes feature hilarious, 'SLICE OF LIFE' stories that modern kids can relate to. The series is LOADED with magic, including a mysterious source of potions that Pinkie keeps hidden behind the bakery counter and breaks out when the need arises."[6]

"Pre-schoolers are to be taken on a journey through the wilder side of Equestria when the Cotton Candy Comet sets into motion a series of strange and magical occurrences.

"The Mane 6 – Applejack, Rainbow Dash, Rarity, Twilight Sparkle, Fluttershy and Pinkie Pie – will experience exciting and otherworldly events such as the opening of a magical portal, travelling through time, and even visiting another dimension where they will meet some truly wild new friends."[7]

Prior to Pony Life's announcement, Spike's design for the series was used in October 8, 2019 posts on the My Little Pony Facebook page[8] and mylittlepony Instagram.[9]

Pony Life was first officially announced in a video uploaded to the My Little Pony Official YouTube channel on November 13, 2019. The video featured new toys slated for release as tie-ins with the series and the characters' new animated designs, set to Lizzo's "Good as Hell".[5] The video was later set to private in December 2019.

A 60-second official trailer for the animated series was uploaded privately to the My Little Pony Official YouTube channel on June 1, 2020.[1] The theme song was uploaded privately to the same channel on June 3.[11] Both the trailer and theme song were made public on June 17 but were later set back to private. From June 18 to December 5, promotional videos were uploaded to the YouTube channel every week, usually on Thursday; since December 5, they have been uploaded on a semi-irregular schedule, almost always on Saturday but not every week.

Both pony and Equestria Girls toys and merchandise are released as tie-ins to Pony Life. Initial releases include a brushable Rarity figurine with hair that grows and changes color, and a first wave of brushable "Potion Ponies" that come with surprise accessories. The "Potion Ponies" line feature a new character Potion Nova as well as releases of Trixie, Twilight Sparkle, and Pinkie Pie. The rest of the Mane Six are split between Waves 1 and 2, with Wave 1 releasing Applejack and Fluttershy, and Wave 2 releasing Rainbow Dash and Rarity. In addition to the brushables, two "Fashion Style" ponies, Pinkie Pie and Fluttershy, featuring surprise accessories and tinsel were released. A Rarity figure was added later.

Equestria Girls dolls released during this time feature Pony Life-inspired packaging. Dolls of the princesses are bundled with articulated, non-brushable pony versions and feature a large range of accessories.

A Q4 release features Fashion Style dolls of the Mane Six and princesses. These feature surprise accessories and crowns for the princesses.

Three waves of blind bag figures were released. The first set is themed after unicorns and features animal characters alongside unicorns and Alicorns. The second set has a balloon theme. The third set features new molds that are polygonal and come with rings. These rings feature a peg which the figure could be placed on top of. Masquerade (not to be confused with S01E26 Unnamed Earth Mare #1), Locket Key, Magic Mimics, Bright Sun, Fizzleshake, and Sweet Sugar Pop are inspired by the Generation 1 "Twinkle-Eye" ponies Masquerade, Locket, Mimic, Bright Eyes, Fizzy, and Sweet Pop, respectively; Sunny Starscout, Izzy Moonbow, Hitch Trailblazer, Pipp Petals, and Zipp Storm are Generation 5 ponies.

Like My Little Pony Friendship is Magic, most of the characters are ponies classified into three types: Earth ponies, Pegasi, and unicorns. The animation style used in Pony Life gives the characters a "chibi-fied" appearance, with large heads and small bodies.

In addition to television content aired on Discovery Family, Pony Life will also have short form content uploaded to the My Little Pony Official YouTube channel.

A series of stop motion shorts is being released to promote the new series.

On September 25, 2020, the show started airing on Nelonen in Finland.[134] On September 28, 2020, it started airing on Carousel in Russia. Carousel's webpage for Pony Life uses fanart of the Mane Six, Spike, Starlight Glimmer, Trixie, and Sunset Shimmer.[135][136] On October 3, 2020, the show premiered on Boomerang in Indonesia, Malaysia, and Taiwan. On October 10, 2020, it premiered on Disney Channel in Germany and on PLUSPLUS in Ukraine.

On March 22, 2021, the show premiered on Spacetoon in the Middle East.​[​specify​]​ In April 2021, it premiered on TV3 in Malaysia. On June 1, 2021, it started airing on Minimax in Serbia, Bosnia & Herzegovina, Montenegro, North Macedonia, Slovenia, Romania, the Czech Republic, and Hungary. 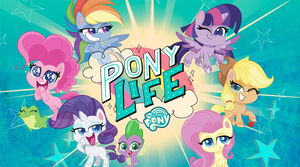