For the song of the same name, see Dance Magic (song).

In this special, Rarity signs the Rainbooms up for a music video competition to raise money for Camp Everfree repairs. However, the Crystal Prep Academy Shadowbolts sign up for the same competition and steal Rarity's music video idea.

This special was initially announced for a Summer 2017 release on Netflix in the United States[1] and later announced to premiere on Discovery Family on June 24, 2017.

Details of this special were first revealed on a Polish website revealing the title as My Little Pony Equestria Girls: Magia Tańca, odc. 1 and aired on Poland's teleTOON+ on May 14, 2017.[2] It also aired on Mexico's[3] and Brazil's[4] Discovery Kids channels on June 16 and 17, 2017 respectively.

This special is included in the Shout! Factory DVD My Little Pony: Equestria Girls - Magical Movie Night released on August 8, 2017[5] and in Netflix's Equestria Girls: Tales of Canterlot High on October 1, 2017.

Regarding Indigo Zap's whereabouts during the events of this special, Ishi Rudell stated in mid-May 2017 that the character was "on vacation somewhere"[6] and Gillian M. Berrow stated on June 24, 2017, "She's on vacation with her family. They're on a cruise."[7] Also according to Rudell as well as Katrina Hadley, the special's script was written before Legend of Everfree; after "a last minute change in delivery order", the script was altered from the girls raising money to attend Camp Everfree to them raising money to fix it.[8][9]

Workin' at the car wash, yeah!

The special begins with the Mane Seven having a car wash fundraiser in front of Canterlot High School to raise money for reparations to Camp Everfree. However, after washing Big McIntosh's car and having exhausted all other ideas to make money, the girls have only raised half the amount that they need, and the camp's fundraising deadline is one week away. Rarity claims that she has a great idea and tells her friends to meet her in the school music room later.

As the girls leave, Spike asks Rarity about her supposed idea, and she reveals she doesn't actually have one.

After a few hours of window-shopping at the Canterlot Mall, Rarity is still unable to come up with an idea to raise money for Camp Everfree. She hears an advertisement on a nearby television for the "Chance to Prance" music video contest, which promises a substantial money prize to the winner. While signing up for the contest, Rarity runs into the Crystal Prep Academy Shadowbolts—Sour Sweet, Sugarcoat, Sunny Flare and Lemon Zest.

They inform her that they are trying to raise enough money to have their spring dance on a yacht and are thus signing up for the music video contest as well. As Rarity shares with the Shadowbolts her vision for the Rainbooms' music video, it piques Sour Sweet's interest.

Later that afternoon, Rarity relates her vision for the music video to her friends in the CHS music room—as well as the Shadowbolts' interest in entering the contest themselves. She explains that she needs the money they raised thus far to buy costume materials for their music video. After assuring the girls that the contest's cash prize will earn them double the amount they need for Camp Everfree, they agree to give her the money for costumes. However, Twilight Sparkle points out that if they lose the contest, they won't have any money left.

"All right, girls! Who's ready to shoot our winning dance music video?"
— Rarity

Some time later, in the school gym, Rarity attempts to direct and choreograph the girls' dance routines, but they make little progress. Twilight guarantees that the Shadowbolts will not only have better dance moves but also a more competitive edge. During their next practice take, Sunset Shimmer accidentally tears through Rainbow Dash's jacket with her shoe heel, and Rarity has to return to the mall to buy more fabric to fix it. While at the mall, she sees the Shadowbolts practicing their own music video—using the same concept that Rarity shared with them.

"I don't believe it... They stole my brilliant idea!"
— Rarity

The Mane Seven visit Rarity at her home later as she fixes Rainbow's jacket, and she tearfully reveals to them that the Shadowbolts stole her music video idea. The other girls consider coming up with a new music video idea since they were having trouble learning the choreography, but Rarity is confident in her original idea's success. She decides to go to Crystal Prep and confront the Shadowbolts directly, and Twilight volunteers to accompany her since she used to be a student.

Twilight and Rarity sneak into Crystal Prep and meet with the Shadowbolts in the school dance room. Rarity demands that they use a music video idea other than the one they stole from the Rainbooms, but Sour Sweet refuses, especially since they're close to completing and submitting their video. Rarity decides to use her original idea anyway, but Sunny Flare points out that by the time the Rainbooms submit their own video, they will appear to be the copycats.

The Mane Seven reconvene in the CHS music room to come up with a completely new concept for their music video. Applejack brainstorms an idea in which the girls are in the CHS home ec room dressed as cowgirls and making apple fritters. Rainbow Dash's idea is an exciting jungle chase scene inspired by the Daring Do book series. Finally, Pinkie Pie comes up with a cheesy space-themed music video, illustrated in child-like crayon drawings. However, Rarity rejects all of these ideas because they ignore the contest's core requirement of dancing, and she storms out of the room in a huff.

Rarity goes to a diner to drown her sorrows in ice cream. While there, she overhears the Shadowbolts talking about their contest submission. As it turns out, the Shadowbolts have not yet submitted their music video because they don't have an original song to use with their choreographed dance routines. They are also worried about letting down their classmates by not having Crystal Prep's spring dance on a yacht as promised. Rarity walks up to their table and offers a solution that benefits both competing teams.

Rarity brings her friends to the CHS gym, where she has made a stage for her original music video idea. When Sunset Shimmer comments on how the Shadowbolts stole the idea, the Shadowbolts themselves appear, and Rarity reveals that she has brokered a truce between the two sides. As part of their truce, the Shadowbolts will help the Rainbooms with their choreography, and the Rainbooms will provide an original song, effectively combining their teams' talents into one music video. Sunny Flare helps Fluttershy change the song lyrics, and though Rarity and Sour Sweet get into a brief argument over whether to work on the dancing or the music first, Sugarcoat helps them reach an agreement.

Together as the "Crystal Rainbooms", the Canterlot High and Crystal Prep girls film their music video for the song Dance Magic, and they win the music video contest. With the prize money, the Mane Seven have enough to renovate Camp Everfree, and the Shadowbolts have enough to have their maritime spring dance, and they all celebrate over smoothies at the mall. Rarity offers to have the Rainbooms perform at Crystal Prep's spring dance, and Sour Sweet accepts—after they figure out what they're going to wear.

"I already have some ideas that I'd be willing to share."
— Rarity

Rarity: Not to worry, darlings. It's my turn to devise a plan, and I already have something amazing in mind. It will be the most profitable of all of our fundraising events! The pièce de résistance!
Applejack: Phee-yew! Now we're talkin'! What's your idea?
Rarity: Meet me in the music room later this afternoon and I will explain everything.
Rainbow Dash: Uh-huh!
Pinkie Pie: Hee hee!
Spike: You got nothin', huh?
Rarity: How did you know?

Sour Sweet: [sweetly] Rarity! What a nice surprise! [sourly] Not.

Lemon Zest: Are you signing up for the "Chance to Prance" contest, too?
Rarity: I am. Heh heh. Are you girls here to sign up for the competition?
Sugarcoat: We definitely aren't here because we like standing in lines.

Sour Sweet: Hey, girls! So what did you think of our routine? Scared yet?
Rarity: Don't change the subject, Sour Sweet!
Sugarcoat: But you didn't bring up a subject.
Rarity: You, either!
Sour Sweet: Ooookay...

Rarity: Oh, this is all my fault! All the money we raised is gone and now we have no music video! I should never have convinced you all that we could pull this off in so little time!
Rainbow Dash: Are you crazy? We're great at doing stuff super-fast. I mean, look at Pinkie Pie. She just built that castle made entirely out of chocolate bars while we were talking.
Pinkie Pie: [chomps, gulps] Want some?

Rainbow Dash: So... we're in the middle of the jungle. And we're being chased by henchmen who are shooting poison arrows at us!
Mane Seven: [scream]
Rainbow Dash: When suddenly, out of nowhere, the shadow of a giant beast appears!
[beast roars]
Twilight Sparkle: Wait a second. Isn't this a scene from the latest Daring Do book?
Rainbow Dash: [laughs] Oh yeah. That's why it seemed so cool. Never mind.

Pinkie Pie: We'll start out on... the moon! And we'll be wearing really sparkly costumes. No! Wait! We'll be in space suits! We're surrounded by gorgonzola cheese! But then a space doggie walks over and start to eat the cheese!
Spike: Mmm! Rich with buttery undertones. 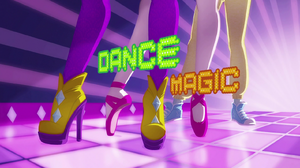