My Little Pony Equestria Girls: Holidays Unwrapped is a Christmas-themed Equestria Girls special. It is the last piece of Equestria Girls content produced by DHX Media.[1][2] Unlike previous specials, it is a compilation of six seven-minute shorts instead of a single hour-long story.

The special aired on PLUSPLUS in Ukraine on September 1, 2019, sixty-two days ahead of its scheduled premiere on Discovery Family. It also aired on Teletoon+ in Poland on September 22, 2019.[3]

According to co-director Katrina Hadley, the special's six parts were always meant to be released together; a draft for a single storyline was made but never got past the outline stage.[4]

It was added to the Discovery Family GO! mobile app on November 3, 2019.

In February 2021, Nick Confalone shared on Twitter, "I had pitched Hasbro an hour-long winter special for the end of [Equestria Girls] season 2 that would set up a third season, but when it didn't happen we ended up making the winter-shorts-special instead."[5] The special, originally pitched in October 2017, would have addressed Sunset Shimmer's "ongoing redemption arc" and revealed "what happened to the human Sunset Shimmer".[6]

At Twilight Sparkle's house, the Equestria Girls wake up after spending the previous night studying for a school test. Despite their all-night study session, they are sleep-deprived and underprepared for their test. Luckily, after seeing light snowfall outside, Rainbow Dash comes up with the idea of making a fake snow day in order to get Principal Celestia to cancel school.

In the montage that follows, the girls set up a fake snow day display outside Canterlot High School. Pinkie Pie makes a snowman out of potatoes (with some interference by a hungry raccoon); Sunset Shimmer paints a large portrait of the school courtyard covered in snow; Fluttershy directs her animal friends to make snow from ice blocks, which Twilight then spreads across the courtyard, and Rarity spends the whole time knitting a scarf for Pinkie's potato snowman.

Principal Celestia and Vice Principal Luna see the result of the girls' work outside Celestia's office window. Before Celestia cancels school for the day, however, Cranky Doodle sees through the ruse, and the girls are caught and punished with detention after their test. It is revealed that Rainbow Dash's snow day project was actually a way to prepare her and her friends for their test on water vapor.

At Pinkie Pie's house, Pinkie is baking a soufflé for Rarity. She explains to Sunset Shimmer that she bakes a soufflé for Rarity every year, but she always fails to deliver it to her before it deflates. This year, Pinkie plans out the perfect route to deliver the soufflé to Rarity's house within seven minutes, but she and Sunset discover a raging snowball fight happening on her front yard.

Sunset and Pinkie attempt to break through the war-like battlefield, even trying to call a ceasefire, but the two sides refuse to stop hurling snowballs. After briefly incapacitating Applejack, Sunset recruits Flash Sentry's help in getting Pinkie across the yard, but Flash is quickly taken out. Sunset eventually sacrifices herself so that Pinkie can make it the rest of the way, but seven minutes pass, and Pinkie fears she will once again fail to deliver her soufflé in time.

Just then, Rarity unexpectedly appears, and Pinkie quickly gives her the soufflé before it deflates. Rarity finds the soufflé absolutely delicious, and Pinkie is happy that she succeeded in preserving her and Rarity's holiday tradition. When Rainbow Dash pops out of a snowman and tries to hit Pinkie and Rarity with snowballs, Rarity shields them with her magical geode powers.

At Applejack's house, Applejack and her family are setting up their annual holiday harvest and cider-making party, to which Applejack invited Twilight Sparkle. Applejack mentions to Twilight that Flim and Flam swindle her and her family at the party every year. The Apple family decides to out-swindle the Flim Flam brothers this year by setting traps for them, and Twilight offers to help.

Through Twilight's instruction, the Apple family sets up for their cider-making party and plans to sell Flim and Flam a jug of salt-and-pepper water instead of their signature apple cider. As the party gets underway, Flim and Flam arrive and, promising to have no tricks up their sleeves this year, offer to trade some of the Apple family's cider with a fake diamond. Once the trade is fulfilled, Flim and Flam drive off, and Twilight and her friends believe they have successfully swindled the brothers.

The Equestria Girls go to Sunset Shimmer's storage locker to retrieve bags of toys to give out to kids at the Toys for Kids Festival. After a brief period of figuring out who has the storage locker key, Sunset realizes she left it in her locker at school, which is closed for winter break. In front of the school, some of the girls come up with heist ideas to break into the school and retrieve the key.

Twilight disapproves of all these ideas that amount to breaking and entering, and she comes up with the far simpler idea of calling Principal Celestia's phone and asking her to open the school doors for Twilight and her friends. Once they have the key to Sunset's storage locker, they deliver the toys to the Toys for Kids Festival at the Canterlot Mall. Afterward, Sunset suggests they cash in their gift cards and go shopping. Twilight realizes she left the gift cards at school, but she has another idea for a heist.

Dashing Through the Mall

At the Canterlot Mall, the Equestria Girls get together for a Secret Santa-like holiday gift exchange, but Rainbow Dash forgot to get a gift for Fluttershy. She races through the mall to find a last-minute present, but nearly every store has a long line of people waiting to shop. Luckily, Zephyr Breeze works at one of the mall stores, and he allows Rainbow Dash to cut to the front of the wait line. Rainbow decides to put up with Zephyr's obnoxiousness in order to get the perfect gift for Fluttershy.

Zephyr shows Rainbow a multitude of store items—clothes, fidget spinners, sporting goods, virtual reality goggles, extendable high-five arms, etc.—but Rainbow does not consider anything he shows her to be suitable for Fluttershy's tastes. He eventually suggests an instant camera to replace Fluttershy's camera that broke the previous year. Rainbow Dash approves of the camera, buys it from Zephyr, and thanks him for his help.

Upon returning to her friends, Rainbow Dash gives Fluttershy the instant camera, and even though Zephyr Breeze had already replaced her broken camera, she loves Rainbow Dash's gift. The rest of the girls exchange gifts as well, and the short ends with Snips and Snails gifting each other with extendable high-five arms.

At Canterlot High, Applejack meets with her friends and suggests starting a new holiday tradition. She explains that every year for her family's Harvest Festival, her family takes a theme photo to send to their friends, and she suggests she and her friends do the same with a "cornucopia" theme. Despite her friends' reluctance over the possibility of publicly embarrassing themselves, they agree to do it for Applejack's sake, and Rarity offers to design the girls' wardrobe.

In the following montage, Rarity fashions fruit and vegetable costumes for herself and her friends. They attempt to make their way to the auditorium for the photoshoot before anyone sees them, but the school bell suddenly rings. The other school students come out of the classrooms and laugh at the girls as soon as they notice them.

In the school auditorium, the girls meet with Applejack and Photo Finish in their embarrassing costumes. Applejack also laughs at them, explaining that she just wanted them to take a group photo in front of a cornucopia backdrop. Annoyed that they publicly embarrassed themselves for no reason, the girls dress Applejack up in a costume just like theirs, and they take their group photo while wishing the viewer a happy holiday.

Fluttershy: Even after our all-night study session, I still don't know the difference between vaporization and sublimation.
Applejack: [sighs] Reckon this test is gonna be an abomination.

Pinkie Pie: Can't believe I almost slept through a montage!

Pinkie Pie: Potatoes get mashed, then evaporate into potato moisture, where they converge into potato clouds! And when those clouds can't hold the weight, that's where the potato flakes come from! Or is it potato chips?

Pinkie Pie: We have seven minutes to get to Rarity's house before this soufflé frumples into a soggy yuck-bucket!

Fluttershy: We've been pinned down for hours with no reinforcements and no handwarmers.
Trixie: [shakily] I'm cold... S-S-So cold...
Fluttershy: Stay with me, Trixie!

Sunset Shimmer: Hold up, everyone! Pinkie Pie and I aren't in the game!
Granny Smith: What game? This here's war!

Twilight Sparkle: Would you say the Apple Family Annual Holiday Harvest and Cider-Making Fest is more of a mulling fest or a chilling fest?

Twilight Sparkle: And to think, bow ties used to be a symbol of integrity that only cool people wore.
Applejack: Oh, honey, you're thinkin' of bolo ties.

Pinkie Pie: It's winter break, I have hot cocoa, and we're about to bring a giant wagon of toys to little kids! [gasps] This is the best day ever! [sniffs] Is that... a marshmallow? [laughs] Today just got better!

Sunset Shimmer: Nice to finally use this darn thing. I've been paying monthly, and I never use it.
Twilight Sparkle: What is it, a gym membership?

Rainbow Dash: I can't believe I forgot to get Fluttershy a present!

Rainbow Dash: What is with the mall being so crowded on the holidays?! Some of us have last-minute shopping to do!

Zephyr Breeze: Get someone something they'd never get themselves.

Applejack: Last year, we all pretended to be ghosts.
Twilight Sparkle: Uh, there's no one in this picture.
Applejack: Because you can't see ghosts, Twilight.

Rainbow Dash: Remember when you made us be the quadratic equation for Halloween?
Fluttershy: I didn't mind that costume.
Rainbow Dash: 'Cause you got to be a plus or minus. I could barely function. [gasps] Wait. Was that a math pun?! [groans] You're ruining me!

Sunset Shimmer: We're gonna look silly.
Rarity: Yes, Sunset. Yes, we are. But we're going to be the most fashionable kind of silly there is.

Pinkie Pie: I'm feeling a little "husky", so I don't want to "ear" it. [chuckles] Sorry if that joke was "corny", but it's all I have right now!

Sunset Shimmer: Okay, so, now that we are a laughingstock—
Pinkie Pie: Did someone say "stalk"? 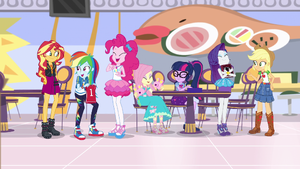