In this special, Sunset Shimmer returns to Equestria when her magic journal runs out of pages, and she brings Starlight Glimmer back with her to the human world. Meanwhile, a bitter Juniper Montage finds a mirror enchanted with Equestrian magic.

This special was initially announced for a Summer 2017 release on Netflix in the United States[1] and later announced to premiere on Discovery Family on July 8, 2017.[2][3]

Details of this special were first revealed on a Polish website revealing the title as My Little Pony Equestria Girls: Magia lustra, odc. 3 and aired on Poland's teleTOON+ on May 28, 2017.[4] It also aired on Mexico's[5] and Brazil's[6] Discovery Kids channels on June 30 and July 1, 2017 respectively.

This special is included in the Shout! Factory DVD My Little Pony: Equestria Girls - Magical Movie Night released on August 8, 2017[8] and in Netflix's Equestria Girls: Tales of Canterlot High on October 1, 2017. Both versions have the color saturated high for some reason.

According to Katrina Hadley, the color of Sunset Shimmer's magic aura was changed from cyan to red to reflect her "redemption & epiphany colour" from when she ponies up in Rainbow Rocks.[9]

The special begins at the Canterlot Mall, where Juniper Montage now works as a movie theater usher after the events of Movie Magic. She still bears resentment toward the Mane Seven for causing her to get fired at the film studio, made worse when she sees their Dance Magic music video being played on all the television monitors and their pictures on the premiere poster for the Daring Do film. Juniper's boss contacts her on her walkie-talkie and tells her to get back to work, but she fakes bad reception to ignore him.

At a mall sunglasses kiosk, Juniper tries on some sunglasses while lamenting her situation. Just then, a wisp of Equestrian magic floats inside the mall and enchants a hand mirror on the kiosk counter. When Juniper picks up the mirror, she sees a vision of herself as a beautiful, world-famous movie star. Captivated by her own magical reflection, Juniper purchases the mirror from the kiosk and walks off.

In the mall's food court, Sunset Shimmer writes in her journal to Princess Twilight Sparkle that the magical incidents she and her friends have faced have left her in a constant state of distraction. Unfortunately, she runs out of pages in her journal before she can write any further. As her friends arrive, Sunset confides in them that, even though things have been calm lately, she is worried when the next magical incident will happen. Just then, she receives a reply from Twilight in her journal, telling her to come to Equestria.

Back at the movie theater, Juniper Montage has become obsessed with her new mirror, basking in the fame and attention that her reflected self is receiving. When her boss tells her to clean up a mess of popcorn, Juniper absentmindedly wishes the popcorn to clean itself up. The mirror magically vacuums all the popcorn off the floor, much to Juniper's surprise.

Outside Canterlot High School, Sunset goes through the portal under the Wondercolt statue base and transports back to Equestria. In her old unicorn form, she crashes into the Castle of Friendship library and runs into a pony whom she believes to be Twilight at first. However, the pony introduces herself as Starlight Glimmer, Twilight's student. After Sunset gets reaccustomed to her pony form, Starlight gives her a new journal to replace her old one. Unfortunately for Sunset, Twilight is currently away on a friendship mission.

Before Sunset goes back through the Crystal Mirror, Starlight curiously asks her about the world she came from. Intrigued by Sunset's explanation, Starlight asks if she can go with her and see it for her herself, reasoning that Twilight won't mind as long as she learns about friendship. Having never run into Starlight's human counterpart, Sunset agrees, provided that Starlight keep a low profile.

After coming through the portal, Starlight has a somewhat similar reaction to becoming a human as Twilight did in the first film: getting used to having hands and feet instead of hooves and learning to walk on two legs instead of four.

Meanwhile, Juniper conducts some more experiments with her mirror, trying to make it do magic again, but nothing happens. Suddenly, the rest of the Mane Seven appear before her. Pinkie Pie is surprised to see Juniper at the movie theater after what happened at the film studio, but Juniper explains that her uncle Canter Zoom got her a job at the theater out of pity. Juniper gets angry at the girls for ruining her chance at stardom and wishes for them to disappear. This time, the mirror reacts and magically pulls the girls inside, leaving behind Fluttershy's barrette.

In the mall, Sunset tries calling her friends, but all her calls go to voicemail. She vents her worries and concerns to Starlight, and she tries to offer advice, but Sunset instead waits for a reply from Princess Twilight. As Sunset continues to worry about another magic incident happening, Starlight tells her to trust that things will work themselves out. Taking Starlight's advice to heart, Sunset shows her to the movie theater. Meanwhile, the rest of Sunset's friends find themselves in a vast and colorless limbo with nothing but a large mirror-shaped window and discarded popcorn on the ground.

Sunset and Starlight enter the movie theater lobby, where Sunset sees Juniper wearing Fluttershy's barrette on her uniform. After telling Starlight to stay hidden, Sunset approaches Juniper and asks if she has seen her friends, but Juniper refuses to answer. Using her magic geode powers, Sunset reads Juniper's mind and sees her making the girls disappear into the mirror. Sunset demands that Juniper set them free, but Juniper, believing that Sunset wants the mirror for herself, sends her into limbo to join her lost friends instead.

Attack of the 50-foot diva

In limbo, Twilight and Applejack try reaching for the mirror window but are unable to. Just then, Sunset appears through it. The girls believe they are trapped in limbo for good, but Sunset informs them that Starlight Glimmer is still on the other side of the mirror. With the seven friends now together, Fluttershy notices her geode glowing, but no one acknowledges her until Rainbow Dash brings it to their attention. Their geodes suddenly shoot bursts of magical energy through the window, causing Juniper to grow taller and transform into a monstrous version of her reflected self.

Starlight follows Juniper as she goes out into public and starts walking around in her monstrous form. The mall patrons run away from her and scream in terror, but Juniper only sees them as adoring fans and paparazzi. Starlight tries grabbing the mirror away from Juniper, but it flies out of both of their hands and cracks on the floor. This causes the limbo world that the Mane Seven are trapped in to start breaking as well. Starlight discovers that the mirror's power grants wishes and tries wishing her friends out, but nothing happens. As Juniper attempts to take the mirror back from Starlight, she continues to curse the girls who ruined her chance at fame, but Starlight wonders if it is fame or friendship that Juniper really wants.

Starlight sees a kindred spirit in Juniper, since they have both acted out of revenge for petty reasons, and offers to be her friend. Juniper does not believe her actions are worth forgiving, but Starlight tells her otherwise as long as she makes up for them, starting with setting her friends free. Taking the mirror back, Juniper wishes to undo her mistakes. The Mane Seven are brought back out of limbo, and Juniper returns to normal. Juniper gives a sincere apology for what she's done, and Starlight, Twilight, and Sunset sympathize with her, having gone through similar magic-corrupting ordeals.

Back at the portal outside Canterlot High, the girls accept Juniper Montage as their new friend. Before Starlight leaves for Equestria, Sunset receives a reply from Princess Twilight saying that some lessons are better learned in action. She permits Starlight Glimmer to stay in the human world for a few more days, and Sunset learns to live in the moment instead of obsessing over bad things that might happen.

Pinkie Pie: What's the matter, Sunset Shimmer?
Sunset Shimmer: Oh, I just ran out of pages in my journal. That's all.
Rainbow Dash: Chillax, SunShim.
Fluttershy: Um, who's "SunShim"?
Rainbow Dash: That's Sunset Shimmer's new movie star name. [sips] I just made it up!
Applejack: For sweet apples' sake, we only have bit parts in this flick. We're not movie stars.
Rarity: Yet, darling. Yet.

Pinkie Pie: C'mon! Share your troubles. It might help soothe your stressed nerves.
Sunset Shimmer: Uh, I don't wanna take any of the fun out of our big night...
Pinkie Pie: I said spill it, SunShim!

Pinkie Pie: Look! Twilight's writing you back! Hey, everybody, Sunset's getting an Equestritext!

Boss: [clears throat irritably] Popcorn spill at the condiment counter.
Juniper Montage: Does this look like someone who cleans popcorn spills?
Boss: No. It looks like someone about to fire somebody.

Starlight Glimmer: What's it like back there?
Sunset Shimmer: It's pretty different. And not so different at the same time. It's kinda hard to explain.

Sunset Shimmer: It's just... I know my friends and I have been given special powers for a reason, and I want to be ready for whatever is gonna be thrown at us. I guess knowing that is making me feel like I could never really relax and let my guard down, so I end up obsessing about it and can't get out of my own head.
Starlight Glimmer: Hmm. That is a toughie. Guess my advice would be to just trust things will work themselves out in the end. If you spend too much time worrying about the bad things that might happen, you'll miss out on all the good things that are happening.
Sunset Shimmer: Heh. Like how Princess Twilight's student is teaching me a lesson right now.
Starlight Glimmer: Yup. Like that.

Rarity: Uh... Any clue yet where we are or what just happened? Anyone?
Pinkie Pie: Pinkie Pie's on the case!
[fourth wall creaking]
Pinkie Pie: Nope, no wall over here. Come out, come out, walls, wherever you are! I don't get this place! There's no walls in here anywhere!

Fluttershy: I think I might be freaking out a little bit.
Rainbow Dash: You call that a freakout?
Fluttershy: It's sort of a deep-down-inside freakout.

Rarity: How could this happen on the evening of my very first movie premiere? Of all the nights! Curse you, cruel fate!
Rainbow Dash: Not our number-one problem right now, Rarity.
Rarity: Mmm, true. But perhaps we can agree it's in the top five.

Sunset Shimmer: It's Juniper Montage!
Starlight Glimmer: [surprised] No! [gasps, seriously] Who's that?

Juniper Montage: I'm so sorry.
Sunset Shimmer: It's okay. We've all been there.
Juniper Montage: Really?
Starlight Glimmer: Manipulated an entire town into giving up their talents so they wouldn't think they were special.
Twilight Sparkle: Overpowered by a magic I couldn't control and created a rift between two worlds, almost destroying both of them in the process.
Sunset Shimmer: Turned an entire school into my own personal zombie army in hopes of conquering a distant pony world.
[beat]
Pinkie Pie: Wow! We are a really forgiving group! 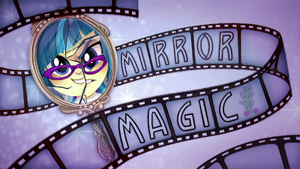