In this special, the Equestria Girls are invited onto the set of the upcoming Daring Do movie. But a mystery soon unravels at the film studio when some important props go missing.

This special was initially announced for a Summer 2017 release on Netflix in the United States[1] and later announced to premiere on Discovery Family on July 1, 2017.[2][3]

Details of this special were first revealed on a Polish website revealing the title as My Little Pony Equestria Girls: Magia filmu, odc. 2 and aired on Poland's teleTOON+ on May 21, 2017.[4] It also aired on Mexico's[5] and Brazil's[6] Discovery Kids channels on June 23 and 24, 2017 respectively.

This special is included in the Shout! Factory DVD My Little Pony: Equestria Girls - Magical Movie Night released on August 8, 2017[7] and in Netflix's Equestria Girls: Tales of Canterlot High on October 1, 2017.

The unnamed director of the Power Ponies movie may be modeled after screenwriter and film director Joss Whedon.[8]

The special begins in an exotic location with a volcano, where a Clark Gable-esque man laughs evilly about collecting three relics, dooming a village called Marapore, and calling himself Stalwart Stallion. Suddenly, film director Canter Zoom yells, "Cut!", revealing this location to be a movie set for the film adaptation of Daring Do and the Marked Thief of Marapore.

Rainbow Dash, having interrupted this latest film take, says that Stalwart Stallion should be known as Mojo at this point in the story, citing accuracy to the film's source material.

The Mane Seven have been invited onto the film studio lot by Canter Zoom as thanks for saving Camp Everfree, and Rainbow Dash is especially excited about the opportunity. One of Canter's production assistants informs him that the costume for the film's nightclub scene has gone missing, and Canter excuses himself.

With some free time before the next scene is scheduled to be filmed, the girls decide to split up and check out the various areas of the studio. Rarity wants to meet Chestnut Magnifico, the actress portraying Daring Do, and Fluttershy wants Chestnut to sign an animal petition. Sunset Shimmer and Applejack want to check out the Mount Vehoovius set up-close, Pinkie Pie and Spike want to find the buffet and "cupcake fountain", and Twilight Sparkle and Rainbow Dash want to see the film props designed and approved by A. K. Yearling herself.

At Chestnut Magnifico's trailer, Fluttershy and Rarity hear Chestnut arguing with her agent over the phone, shouting that she wants production on something "shut down". On the Mount Vehoovius set, Sunset and Applejack discover a discarded Bon Mot peanut butter praline candy bar wrapper. While checking out the sword, staff, and arrow props being used for the film, Twilight and Rainbow Dash meet Juniper Montage, Canter Zoom's niece and personal gofer. Juniper says that she knows the ins and outs of the studio and that she asked her uncle to cast her as Daring Do, but he refused. She offers to show Twilight and Rainbow another set for the movie, mentioning that she has key access to every area in the studio.

Meanwhile, Pinkie Pie and Spike fail to find the cupcake fountain, but they do find and eat a lot of Bon Mot candy bars. Nearby, they see Canter Zoom talking with Chestnut at the craft services table. Canter attempts to negotiate an extension on Chestnut's film contract, but an angry Chestnut is more concerned about her missing Bon Mot bars, prompting Pinkie and Spike to flee the scene. When the girls reconvene later, the film crew starts another take on the movie's next scene, but the Mount Vehoovius set suddenly collapses. Even worse, Rainbow Dash discovers that the relic props have disappeared.

Mystery at the movies

The Mane Seven, Canter Zoom, and Juniper Montage return to where the relic props were previously on display. Sunset suggests making new props, but Canter says they cannot without A. K. Yearling's approval. With Chestnut Magnifico's contract about to expire and the Mount Vehoovius set now destroyed, Canter fears that production on the movie will be permanently halted. As he and Juniper leave to do more damage control, Twilight detects a pattern starting to form. She believes someone is intentionally sabotaging the movie's production, and all signs appear to point to Chestnut being the culprit.

Sunset, Fluttershy, Pinkie, and Spike decide to find Chestnut while the others look for the missing props. All of a sudden, Twilight, Applejack, and Rarity spot a mysterious hooded figure lurking nearby. Rainbow Dash uses her geode powers of super-speed to chase the hooded figure, but they quickly give her the slip. Sunset, Fluttershy, Pinkie, and Spike rejoin the others soon after, saying they couldn't find Chestnut. As Rainbow informs Sunset about the hooded figure, a P.A. walks by, mistaking the girls for actresses, and tells them to get into costume.

The rest of the girls escape from the net and notice tracks of chocolate pudding that Rainbow left during her chase. They follow the tracks to the storage area, and Fluttershy hears Rainbow calling out from inside the locked room. Using her geode powers of telekinesis, Twilight magically unlocks the door and lets Rainbow out. After seeing the recovered nightclub costume, Twilight has an idea on who the real culprit is, and the girls devise a trap to catch them.

The Mane Seven meet with Canter Zoom, Chestnut Magnifico, and Juniper Montage in front of the Tricorners Village set and ask for Canter's permission to search for clues. Agreeing to this, Canter tells Chestnut to get into hair and makeup and Juniper to go get some smoothies. A short while later, the girls catch the hooded figure attempting to move the relic props to another hiding spot, and it is revealed to be Juniper. Juniper tries to act innocent, but she has been caught red-handed. Twilight deduces that she was only able to pull off this heist due to her intricate knowledge to the studio's layout and her key access to all studio areas.

When asked why she did all this, Juniper admits that she resents her uncle for not casting her as Daring Do in his movie, as well as Chestnut for eating all of her Bon Mot candy bars. Canter angrily reprimands Juniper for jeopardizing the film's production, endangering everyone's safety, and taking advantage of his trust. Juniper apologizes and asks for forgiveness, and while Canter does forgive her, he bans her from the studio. As Juniper is escorted out by studio security, she looks back at the Mane Seven with a vengeful look in her eyes.

Chestnut returns to inform Canter that her agent got her out of a previous attachment to a documentary project that she was uninterested in. Thus, she is able to extend her contract and finish filming the Daring Do movie. Canter happily congratulates and thanks the girls for a job well done, and he agrees to cast them as extras in the movie as a show of his gratitude.

As filming resumes, Chestnut—now acting in the role of Daring Do—runs through the Tricorners Village square with one of the relic props in her holster. She confronts the actor playing Stalwart Stallion, who waves a magical scepter in his hand. Rainbow Dash tosses Daring Do her whip, and the climax of the film begins, but Rainbow Dash once again ruins the take by speaking up out of excitement.

Canter Zoom: As a fellow Camp Everfree alum, I was more than happy to afford the girls who helped save it the chance to visit the set of our little film.
Rainbow Dash: Eh-heh! Little? This is Daring Do we're talking about! This movie is gonna be huge!

Pinkie Pie: I read it in my 100 Things You Didn't Know About This Movie Studio: Insider's Tour Guide.
Applejack: Is the number-one thing we didn't know that the guy who founded this studio was an eccentric oddball with a sweet tooth?
Pinkie Pie: Oh! Yes!

Chestnut Magnifico: Ugh! I don't care if I'm under contract! This is a joke, and I want this thing shut down! Do you hear me?!

Canter Zoom: The missing relics were personally approved by A. K. Yearling! We could have new ones made, but we can't use them until Miss Yearling has given them her official stamp of approval! You think it'd be easy to reach someone who is always holed up in her office writing, but Miss Yearling is a very difficult woman to track down.

Rarity: Chestnut Magnifico is an acclaimed actress! She'd never do something so dramatic!
Sunset Shimmer: [sarcastically] An actress? Dramatic? Never.

Applejack: It's not like there's some mysterious, thievin', cloaked figure we can chase after and say, "Hey, tell us where you're keepin' the relics!"
Rarity: You mean like that one?

Pinkie Pie: This is the set of Stormy with a Side of Pudding!
Applejack: Stormy with a side of what, now?
Pinkie Pie: [grunts] It's only my all-time favorite movie!
[beat]
Pinkie Pie: I've tried to get you all to watch it, like, a kazillion-billion times!

Rainbow Dash: How did you find me? I gave up banging on the door five minutes ago.
Pinkie Pie: Pudding never lies.

Canter Zoom: Not only did you jeopardize the production, endanger the safety of the actors and the film crew, but you also lied to me and took advantage of my trust!
Juniper Montage: I know. A-And I'm sorry. I never meant to hurt anyone, and I was going to return all the props, just as soon as Chestnut quit. I hope you can forgive me.
Canter Zoom: You're my niece, Juniper, so, of course, I can forgive you. But I'm sorry to say you're no longer welcome on the set, and it'll be a long time before I consider allowing you back here! 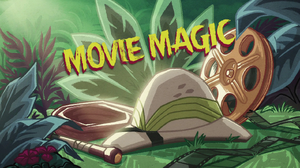