The first three shorts take place during the first movie.

The Russian dubs of Mad Twience and Get the Show on the Road were released online in March 2017.[2]

Make Up Shake Up

Make Up Shake Up is the first Summertime short. It premiered on Discovery Family on July 30, 2017 after the network presentation of Garfield and was uploaded to Hasbro's official YouTube channel on August 18, 2017. The animation primarily focuses on Rarity and Applejack.

Shortly before the start of the Fall Formal, Rarity finishes getting dressed and putting on her makeup. She offers to put makeup on Applejack as well, but she declines. After some encouragement from her friends, Applejack hesitantly agrees. When Rarity finishes, Applejack is not too thrilled with the results and asks Rarity to wipe some of the makeup off. In the end, Applejack looks exactly the same as before Rarity started, much to Rarity's chagrin.

A Photo Booth Story is the second Summertime short. It premiered on Discovery Family on July 30, 2017 after the network presentation of Garfield and was uploaded to Hasbro's official YouTube channel on August 25, 2017. The animation primarily focuses on Photo Finish.

At the Fall Formal, Photo Finish is employed as the dance photographer. After taking a picture of the Cutie Mark Crusaders, she is unsatisfied with the photo. When the Equestria Girls pose for their photo, Photo Finish suggests adding some style, with assistance from Pixel Pizzaz. The girls take pictures in various costumes and accessories, including Sherlock Holmes-inspired looks for Princess Twilight and Pinkie Pie and queen and butterfly looks for Rarity—all while Rainbow Dash and Applejack play pranks in the background. However, during one of the photos, Rarity's butterfly wings briefly catch fire. When they finish, Photo Finish declares this the pinnacle of her photography career and makes her trademark exit. As the girls laugh, Rarity asks if she can keep the wings.

Raise This Roof is the third Summertime short. It premiered on Discovery Family on July 30, 2017 after the network presentation of Garfield and was uploaded to Hasbro's official YouTube channel on September 1, 2017. The animation primarily focuses on Applejack, Rainbow Dash, and the Cutie Mark Crusaders.

As the Fall Formal continues, a country-western song that Applejack requested earlier starts to play. Applejack invites her little sister Apple Bloom to join in a line dance with her. Seeing their dancing as a competition challenge, Rainbow Dash invites Scootaloo to join her on the dance floor in a hip-hop breakdance. As the dance-off becomes aggressive and Applejack and Rainbow get carried away, Apple Bloom and Scootaloo separate from them.

At Apple Bloom's suggestion, she and Scootaloo start their own dance routine, winning the dance-off and receiving a trophy from Pinkie. Applejack and Rainbow look disappointed in the Crusaders at first, but they compliment the two on their dancing, and Rainbow Dash asks for a rematch.

Steps of Pep is the fourth Summertime short. It premiered on Discovery Family on July 30, 2017 after the network presentation of Garfield and was uploaded to Hasbro's official YouTube channel on September 15, 2017. The animation primarily focuses on Pinkie Pie and Fluttershy.

Fluttershy joins Pinkie Pie's cheering club at Canterlot High School, and together they cheer on the home team during a soccer game between the Wondercolts and Shadowbolts. Unfortunately, while Pinkie is easily able to get the crowd going, Fluttershy can't get her voice above a whisper. After the game, Pinkie teaches Fluttershy how to cheer properly during the Wondertones' practice, and they later cheer for the school chess club, which actually requires them to be quiet.

Pet Project is the seventh Summertime short. It premiered on Discovery Family on August 5, 2017 after the network presentation of Firehouse Dog and was uploaded to Hasbro's official YouTube channel on September 22, 2017. The animation primarily focuses on Sunset Shimmer and Fluttershy.

Fluttershy gives her and her friends' pets baths in preparation for a photo shoot as part of a charity calendar to raise money for the animal shelter. Sunset Shimmer wants to contribute, but she doesn't have a pet of her own. Fluttershy asks if she wants one, but Sunset says she wouldn't even know what to choose. Later, during the photo shoot in the CHS music room, Sunset becomes envious at how cute her friends' pets are and asks for Fluttershy's help in choosing a pet for herself.

At the animal shelter, Fluttershy shows Sunset an assortment of pets to choose from, but none of them really capture her attention. Just then, she sees and becomes enamored with a small leopard gecko, calling it "a ray of sunshine". Some time later, the pet photo shoot continues, with Sunset Shimmer's newly adopted pet Ray being included.

Subs Rock is the eighth Summertime short. It premiered on Discovery Family on August 5, 2017 after the network presentation of Firehouse Dog and was uploaded to Hasbro's official YouTube channel on September 29, 2017. The animation primarily focuses on Principal Celestia.

Principal Celestia fills in as a substitute teacher, much to Twilight's excitement. Before she can begin her geology lesson, however, Miss Cheerilee calls her to the library. When she returns to the classroom, she tries to continue the lesson only for Granny Smith to appear and ask for help in the cafeteria. Upon returning a third time, Celestia is interrupted again by Rainbow Dash kicking a soccer ball against the outside of the classroom wall. The fourth time, the classroom telephone rings, and Celestia is called away to address an unspecified situation. Celestia returns once more, confident that was the final interruption, but the school bell rings and class ends, much to her disappointment.

The Art of Friendship

The Art of Friendship is the tenth Summertime short. It premiered on Discovery Family on August 12, 2017 after the network presentation of Evan Almighty and was uploaded to Hasbro's official YouTube channel on October 13, 2017. The animation primarily focuses on Pinkie Pie and Sunset Shimmer.

In art class at Canterlot High School, Pinkie Pie can't think of anything to paint. Sunset Shimmer tells her to find some inspiration and get her "creative juices flowing". Taking her advice literally, Pinkie gets a juice drink from Granny Smith in the cafeteria, but she still doesn't have any ideas. Next, she tries to find inspiration in nature by interacting with birds in the trees, but still nothing. Lastly, she tries finding inspiration by playing her drums. As she really gets into her drum solo, she taps her drumsticks on everything from the music room back to the art room, but still no inspiration strikes her.

Sunset tells Pinkie that, when all else fails, she should just paint a subject that she thinks is awesome and makes her happy. Feeling inspired by Sunset's painting of bright sunflowers, Pinkie Pie grabs some brushes and paint cans and paints wildly on her canvas, causing paint to splatter all over the art room. When she finishes, she reveals that she painted a portrait of Sunset Shimmer herself. Sunset decides to "paint" Pinkie as well, and she hugs her, causing the paint on Sunset to smear on Pinkie.

The Canterlot Movie Club is the eleventh Summertime short. It premiered on Discovery Family on August 20, 2017 after the network presentation of Shrek Forever After and was uploaded to Hasbro's official YouTube channel on October 20, 2017. The animation primarily focuses on the Cutie Mark Crusaders and Pinkie Pie.

Some time after the events of Mirror Magic, Apple Bloom, Sweetie Belle, and Scootaloo of the "CMC"—or "Canterlot Movie Club"—go to the movie theater at the mall for another viewing of the new Daring Do film. All of a sudden, a dismayed Pinkie Pie appears before them and says she lost Gummy somewhere in the theater while buying candy. Inspired by the adventures of Daring Do, the Crusaders volunteer to find Gummy for Pinkie.

After a bit of searching around the mall, the Crusaders eventually find Gummy inside the claw crane game in the theater. After a few tries at the game, Scootaloo succeeds in winning Gummy, much to Pinkie's gratitude. With their "adventure" complete, the Crusaders head inside the theater to watch the Daring Do film once again.

Leaping Off the Page

Leaping Off the Page is the twelfth Summertime short. It premiered on Discovery Family on August 27, 2017 after the network presentation of Legally Blonde and was uploaded to Hasbro's official YouTube channel on October 27, 2017. The animation primarily focuses on Rainbow Dash.

In her bedroom, Rainbow Dash is eagerly looking forward to an afternoon reading the Daring Do books. She starts reading Daring Do and the Forbidden City of Clouds and imagines herself living Daring Do's adventures.

In Rainbow Dash's fantasy, she carries the Doomed Diadem of Xilati through a jungle. She is soon confronted by Slingshot of the Wild Bunch Gang—who strangely only communicates through car horn sounds. After giving Slingshot the slip, Rainbow Dash heads to meet with A. B. Ravenhoof's friend Brumby Cloverpatch. Along the way, she encounters a parrot that makes ringtone sounds, much to her confusion. Later, in a temple of animal statues, Rainbow hears a loud thudding and believes it to be Dr. Caballeron. When she leaps to the top of one of the statues to get a better view of the surrounding area, the statue suddenly breaks, and Rainbow screams as she falls.

Rainbow Dash's fantasy ends, and Twilight and Rarity enter her bedroom to find her sitting on top of her wardrobe. Twilight explains to Rainbow that Applejack had been honking her horn and she had been calling Rainbow's cellphone, but she wasn't answering. Twilight reminds Rainbow of the movie they and their friends had planned to see that afternoon, and an embarrassed Rainbow comes along.

Get the Show on the Road

Main article: Get the Show on the Road

Epic Fails is the fourteenth Summertime short. It premiered on Discovery Family on August 27, 2017 after the network presentation of Legally Blonde and was uploaded to Hasbro's official YouTube channel on November 10, 2017. The animation primarily focuses on the Equestria Girls as a whole.

During lunch in the CHS cafeteria, Rarity sees a picture in a magazine of Countess Coloratura falling over in yoga class and embarrassing herself. Sunset Shimmer muses about the thought of having one's most embarrassing moments broadcast to the world, and this gets the rest of their friends thinking about such "epic fails" they've had in the past:

Back in present day, the girls claim to one another that they never suffer such embarrassing moments. However, on their way out of the cafeteria, they slip on the wet floor and fall over each other. 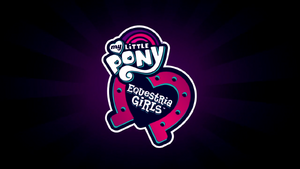