Teacher of the Month is the sixth Friendship is Magic short overall. It was uploaded to the official Hasbro YouTube channel on February 12, 2019. The animation primarily focuses on Fluttershy. It has been privated since for unknown reasons

Starlight the Hypnotist is the seventh Friendship is Magic short overall. It was uploaded to the official Hasbro YouTube channel on February 19, 2019. The animation primarily focuses on Starlight Glimmer and Twilight Sparkle. It has been privated since for unknown reasons 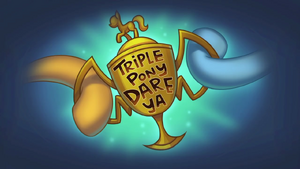