Princess Eris is a female Draconequus ​[​dubious – discuss‍​]​ and owner of a casino in an alternate Equestria. She appears in My Little Pony: Nightmare Knights as the main antagonist.

According to Jeremy Whitley, her design is based on the Sarimanok, a mythological bird of the Maranao people in the Philippines.

Eris first appears in My Little Pony: Nightmare Knights Issue #1, where she infiltrates Stygian's nightmares disguised as the Pony of Shadows from her world. By revealing that she has an alternate version of Princess Celestia in her clutches, she is able to lure Stygian and Princess Luna to her castle casino. She successfully traps Luna and, using the Staff of Sacanas, drains the princess of her powers. Eris announces her intention to auction them off to her villainous patrons, only for Stygian to help Luna escape.

In Issue #2, Stygian and Luna determine that Eris' castle has a security feature, designed to keep out anyone who isn't a current or former villain. In Issue #3, Eris and Daybreaker-her head of security-interrogate a captured Tempest Shadow, with Eris correctly suspecting that she is part of a mission to regain Luna's stolen powers. When Tempest refuses to cooperate, Eris uses Luna's magic to trap her in a nightmare, and considers keeping Luna's magic for her own uses. She then leaves Daybreaker to watch Tempest while she seeks out her teammates, and soon lays an ambush for Stygian and Capper.

In Issue #4, Eris traps Stygian and Capper in nightmare scenarios in an attempt to convince them to help her. Stygian refuses, but Capper appears to accept her offer and leads her to capture Trixie. As they walk, Eris explains her history to Capper, revealing that she stole the spell book of her world's Star Swirl the Bearded in order to prevent the Pony of Shadows from being imprisoned. However, when she denied the Pony of Shadows her aid, he imprisoned her and took to draining her magic, but she eventually defeated him by enslaving Daybreaker. After subduing Trixie, she and Capper turn her over to Daybreaker before leaving to find Luna, unaware that Daybreaker has broken free of Eris' control.

In Issue #5, Eris chats with Capper as they await Luna's arrival, but becomes bored and orders him to perform some of his magic tricks. In the process, he gets a hold of the Staff of Sacanas and, unbeknownst to Eris, replaces the orb containing Luna's stolen magic with an ordinary crystal. Daybreaker then arrives with Luna and her allies, all seemingly in chains, and Eris orders her to destroy them only for Daybreaker to turn against her. Despite their alliance, Eris proves too strong for them, but she is caught off guard when Capper's treachery is revealed and Luna uses her regained power to destroy the staff. Now outmatched, Eris is blasted into the distance by Daybreaker, who unlike Luna has no feelings of mercy towards her former master.

Princess Eris is a character in Gameloft's mobile game, and serves as a boss in the "Nightmare Knights" and "Reflections of Harmony" events. In the latter, she is among the minions summoned by her world's Pony of Shadows to assault Equestria. Her bio states, "An alternate-universe Lord of Chaos who keeps Daybreaker on a leash....Yeah, it's a long story."

Like her cousin Discord, Eris delights in causing chaos, but her views on doing so are markedly different. Where Discord is content with merely disrupting the order of things, Eris seeks to cause terror and mayhem. Her desire to do so is balanced by a marked independent streak, in which she will not willingly put her powers to use on behalf of others. So great is her malevolence that she remade her home Equestria to her own liking, insuring that she would have the means to spread her influence to other worlds as well. 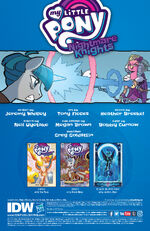 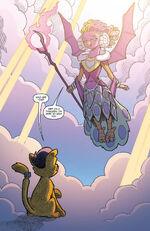 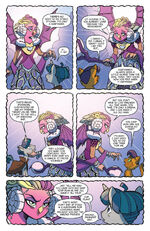 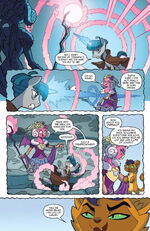 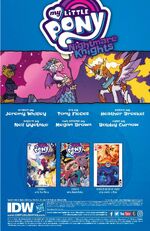 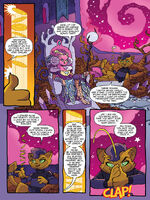 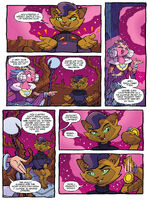 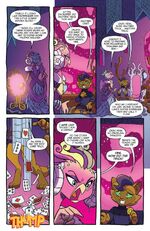 Add a photo to this gallery
Retrieved from "https://mlp.fandom.com/wiki/My_Little_Pony_Friendship_is_Magic_Wiki:Workshop/Princess_Eris?oldid=2159119"
Community content is available under CC-BY-SA unless otherwise noted.