The opening lyrics and melody are borrowed from the theme of the original My Little Pony television series, which ran from 1986 to 1987.

Except Italian season one[note 1] and the Japanese version which both have their own themes, most of the non-English versions, including Boomerang and Cartoonito Italy's broadcasts of subsequent seasons, use translations of this song.

Some animation from the season one ending of the theme song is re-used in Crusaders of the Lost Mark.

It's an easy feat
And magic makes it all complete

You have my little ponies
Do you know you're all my very best friends?

The reprise sung over the credits of most episodes:

A remastered version of the theme song debuted in Lesson Zero.[2] It features unaltered lyrics, but Rebecca Shoichet's vocals for Twilight Sparkle are re-recorded, the instruments are higher in the mix in relation to the vocals, it features a rising "whoop" sound as Rainbow Dash spins through the clouds, and it is accompanied by a slightly different animated sequence. "Creme Brulee" is replaced by Big McIntosh, Granny Smith walks in the opposite direction, there is an addition of a train station and a steam-engine Friendship Express train running through Ponyville, with Derpy peeking from one of the cars' windows and the Cutie Mark Crusaders sitting in the last car, and Princess Celestia's magic now has its proper yellow glow. The melody of the first theme can still be heard in the end credits for most episodes. A slightly updated version is used starting from Sisterhooves Social, which rearranges some of the Friendship Express train cars, changes one of them from brown to purple, and changes the locomotive and caboose from blue to pink. A further updated version is used starting from Princess Twilight Sparkle - Part 1. It is the same as the previous version up until Fluttershy's verse, during which Discord peeks out the window of her cottage. At "And magic makes it all complete!", Twilight has wings and many more characters appear including the Cutie Mark Crusaders, Zecora, Snips, Snails, Mr. and Mrs. Cake, Mayor Mare, Big McIntosh, Granny Smith, and Spike posing for a photo for Photo Finish. In the final sequence, both Princess Celestia and Princess Luna view the letter/photo Princess Twilight sends them.

Yet another slightly updated version is used starting from The Cutie Map - Part 1, using much of the same updates up until "And magic..." where the Golden Oak Library is replaced with the Friendship Rainbow Kingdom castle.

Starting with The Crystalling - Part 1, Starlight Glimmer gets added to the photo group shot at the end, and the Cutie Mark Crusaders have their cutie marks.

Throughout the series, characters occasionally hum, whistle, or play the opening of the theme song, which shares its melody with the original 1980s My Little Pony theme.

Fluttershy does this (and adds a few more bars from the 1980s theme) in The Ticket Master when she and her animal friends are cleaning the Golden Oak Library for Twilight, and again in A Bird in the Hoof, harmonizing with her hummingbird friend Hummingway. Spike hums the tune in Griffon the Brush Off when he carries the scrolls out of the town hall before Pinkie Pie and Rainbow Dash scare him. The bat in May the Best Pet Win! plays the tune on a glass harmonica. Two ponies play the tune on a giant piano at a toy store in The Gift of the Maud Pie.

The theme song has a roughly two-minute extended set of lyrics. A small portion of the extended version of the song was originally introduced as one of three songs included with the My Little Pony Twilight Sparkle Animated Storyteller, an animatronic, plush toy in the form of Twilight Sparkle.[5] An instrumental version of an earlier portion is played in My Little Pony Friendship is Magic: Discover the Difference.

The opening rhythm in the song echoes the classical My Little Pony theme. The original 10-note theme that is heard in all "My Little Pony" themes was written by Anna Bryant, Clifford "Ford" Kinder, and Barry Harman.[7] Lyrics sung by the other main characters are not included in the extended version.

A slightly shortened version of this serves as the third closing theme for the Japanese broadcast of Friendship is Magic.

When I was young I was too busy to make any friends.
Such silliness did not seem worth the effort it expends.
But my little ponies, you opened up my eyes
And now the truth is crystal clear, as splendid summer skies.
And it's such a wonderful surprise.

When danger makes me wanna hide, you'll Rainbow Dash to my side,
Kindness is never in short supply, once smitten twice Fluttershy.
For honesty no pony can deny, you are the Applejack of my eye,
A heart that shines so beautiful, a Rarity to come by
And you all make fun and laughter as easy as Pinkie Pie!

This serves as the first track on the soundtrack album My Little Pony Equestria Girls - Original Motion Picture Soundtrack, where it is titled "Opening Titles (Remix)".

It's an easy feat
And magic makes it all complete
You have my
Do you know you're all my very best friends?

According to a commercial for a Transformers Prime marathon on The Hub, the song is Megatron's favorite song.[8] 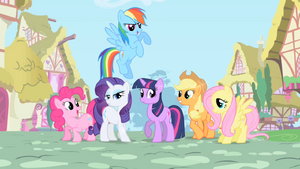 Retrieved from "https://mlp.fandom.com/wiki/My_Little_Pony_theme_song?oldid=1664736"
Community content is available under CC-BY-SA unless otherwise noted.