Neon Lights, or Rising Star, is a male background unicorn pony who appears in several episodes throughout the series. He has a bluish gray coat, dark gray mane, blue eyes, and a cutie mark of three white stars. He is not named in the show, but he is named "Neon Lights" with a trademark symbol and "Rising Star" in various depictions and merchandise.

In a storyboard by Sabrina Alberghetti for Call of the Cutie, an episode of the season prior to Neon Lights' debut, he appears instead of the finished episode's Cherry Fizzy.

Hasbro used the name "Neon Lights" for a G1 Pony Wear outfit and reused this name for the G4 character. The name "Rising Star" was used by fans​[​specify​]​ for the G4 character more than two years before the release of Enterplay's collectible card game card of the character.[1]

Neon Lights first appears in The Mysterious Mare Do Well, watching Rainbow Dash stop the out-of-control baby carriage and cheering for her afterward. In Sweet and Elite, he appears at the Wonderbolts Derby, wearing a hat. Later in the episode, during Rarity's fantasy and Becoming Popular (The Pony Everypony Should Know), he wears a jacket and sunglasses. He then appears briefly in Hearth's Warming Eve, listening to Spike as he narrates the pageant.

In The Last Roundup, Neon Lights is in the crowd when Applejack gives a speech before leaving for the rodeo competition. In The Super Speedy Cider Squeezy 6000, he watches the cider competition between the Apple family and the Flim Flam brothers and later refuses the brothers' cider after they win. He also appears briefly in A Friend in Deed, It's About Time, and A Canterlot Wedding - Part 2.

In One Bad Apple, Neon Lights is seen polishing the cucumber float that Dr. Hooves, Royal Riff, and Amethyst Star ride on, and he later drives the float during the Summer Harvest Parade. In Magical Mystery Cure, he appears both sunburned and frostbitten during Rarity's verse in What My Cutie Mark Is Telling Me.

Neon Lights appears in Princess Twilight Sparkle - Part 1 and at the Summer Sun Celebration at the end of Princess Twilight Sparkle - Part 2. He also appears at various points in Rarity Takes Manehattan; at one point, he appears as an Alicorn pony due to an animation error. He attends the Goof-Off and Rainbow Dash's birth-iversary party in Pinkie Pride and the Cutie Mark Crusaders' play in For Whom the Sweetie Belle Toils.

Neon Lights appears again in Leap of Faith among the audience of ailed ponies at Flim and Flam's show and later at the swimming pool where the bit he uses to purchase the Flim Flam Miracle Curative Tonic from Silver Shill eventually becomes Applejack's key to the Tree of Harmony chest. In Trade Ya!, he is among the crowd of ponies welcoming Princess Twilight to the Traders' Exchange, later seen walking around the Exchange with "Star Bright" as well as at the trial at the end of the Exchange. In Inspiration Manifestation, he is among the ponies blinded by Rarity's gold-covered road and both among the participating athletes and the spectators in Equestria Games.

Neon Lights appears at the beginning of The Cutie Map - Part 1, walking toward the Friendship Rainbow Kingdom castle with Lemon Hearts. In Slice of Life, he watches DJ Pon-3's mobile DJ station speed through Ponyville. In Princess Spike, he appears at the Grand Equestria Pony Summit, later among the ponies queuing to speak with Twilight Sparkle while she is sleeping.

In Party Pooped, Neon Lights reacts to Twilight Sparkle frantically flying through Ponyville. In Do Princesses Dream of Magic Sheep?, he appears in Ponyville's shared dream, where he is captured by a carnivorous plant before Applejack lassos it shut. In Canterlot Boutique, he is among the ponies visiting Canterlot Carousel for its grand opening. In The Mane Attraction, he appears in the audience for Coloratura's performance at the Helping Hooves Music Festival where he is one of the unicorns who lights his horn as she performs The Magic Inside. In The Cutie Re-Mark - Part 1, he appears in the audience for Princess Twilight Sparkle's lecture on cutie marks at the School for Gifted Unicorns.

In A Hearth's Warming Tail, Neon Lights appears in Canterlot during the titular story helping decorate the city for Hearth's Warming during Pinkie's Present and later attending the Hearth's Warming Party at Snowdash's house. In Spice Up Your Life, he makes background appearances in Canterlot's Restaurant Row during It's Gonna Work and later sits in a Restaurant Row diner with an unnamed stallion at night as Rarity advertises the Tasty Treat, causing them and other ponies to follow her to the grand re-opening of the restaurant where he is one of the ponies who cheers for the owner of the Bake Stop. In The Cart Before the Ponies, he makes a background appearance spectating the second running of the Applewood Derby in Ponyville.

In Parental Glideance, Neon Lights appears in the audience for the Wonderbolts' showcase in Canterlot. In Fame and Misfortune, he appears wearing a shirt with Rarity in a heart and matching hat in the mob of angry ponies arguing over the Mane six's published Friendship Journal. In It Isn't the Mane Thing About You, he appears in the crowd of ponies in front of the Quills and Sofas store in Ponyville.

In The Maud Couple, Neon Lights appears laughing with Daisy in Ponyville as seen through Pinkie Pie's binoculars. In Horse Play, he appears in the audience for the play at the School of Friendship. In Marks for Effort, he makes a background appearance walking down an alley in Ponyville. In Yakity-Sax, he makes background appearances spectating the Wonderbolts' Derby in Canterlot, walking in Ponyville, and holding Pinkie Pie-shaped balloons during Pinkie Pie Appreciation Day. In The Washouts, he appears in the audience for the titular group's first show in Ponyville and lines up for an autograph after the show. He later appears in the audience for the Washouts' second show in Ponyville. In A Rockhoof and a Hard Place, he appears sifting through rocks with a pan as part of Professor Fossil's archeology team as they excavate Rockhoof's old village and later appears walking outside the Ponyville Day Spa as Bulk Biceps runs out of the spa screaming in pain. In Father Knows Beast, he appears walking in Ponyville with "Cayenne" while talking to her and later appears wearing a sunhat and sunglasses with Daisy while watching as Rainbow Dash simulates snow outside the Castle of Friendship during a sunny day.

Neon Lights' human counterpart appears in My Little Pony Equestria Girls: Friendship Games as a student of Crystal Prep Academy and member of the Shadowbolts. He first appears on the bus to Canterlot High School, and during Canterlot High's welcome party for Crystal Prep, he interacts with "Indigo Wreath" until Principal Cinch puts an end to the party. In the Friendship Games' academic decathlon, he is partnered with Jet Set in the home economics portion, and they produce a sloppy-looking cake.

Before the Friendship Games' final event, he is among other Shadowbolts pressuring human Twilight Sparkle into releasing magic from inside her pendant.

In A Fine Line, Neon Lights appears waiting in line for the Tirek's Revenge video game at the Canterlot Mall.

In Forgotten Friendship, Neon Lights briefly appears in Applejack's memories of the final event of the Friendship Games.

In the "Dashing Through the Mall" segment of Holidays Unwrapped, Neon Lights makes a background appearance standing at a line to a pet store at the Canterlot Mall.

In Canterlot High Stories: Twilight Sparkle's Science Fair Sparks, Twilight Sparkle's partner "for the first-ever Canter-Crys science fair" is "a charming new Crystal Prep boy named Rising Star. But as Twilight falls under his spell while they create their own party mood modificator, Flash Sentry, Sunset Shimmer, and the rest of her friends suspect Rising Star is up to something wicked."[3]

Neon Lights is a playable character added in the Bugfix update in Gameloft's mobile game. His in-game description states, "With his mohawk mane, starry cutie mark and his cool black shades, Neon Lights is one bright star waiting to be made!" Shadesy Townspony was added in a later update. His bio states, "He may have gotten those oversized novelty sunglasses as a free giveaway at a cute-ceañera, but he still thinks they look spiffy."

A mini-figure toy of Neon Lights has been displayed at the 2014 American International Toy Fair.[4] The toy was released as part of the eleventh wave of mystery pack toys and collector cards and named with a trademark symbol. The toy uses the same mold as that of DJ Pon-3, and the collector card states "NEON LIGHTS loves to have his picture taken!"

In Enterplay's collectible card game, Neon Lights is named "Rising Star" on his own card α #75 C, which attributes to DJ Pon-3 the quote "Rising Star? Yeah, his music is pretty sick. And the louder you play it, the better it sounds." 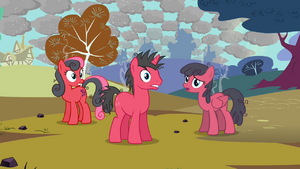