Newbie Dash is the seventh episode of season six of My Little Pony Friendship is Magic and the one hundred and twenty-fourth overall.

When Rainbow Dash makes a bad first impression after joining the Wonderbolts, she is saddled with a mortifying nickname.

The episode's premise was conceived on October 22, 2014. The outline was written on January 14, 2015. The script's first, second and third drafts were respectively written on February 4, February 23 and March 4. The final script was approved on March 11 and locked on March 17.[1]

Five weeks prior to the episode's premiere, a season six promotional image featuring Rainbow Dash in a Wonderbolt uniform was posted on the My Little Pony Facebook page on April 2, 2016.[2]

On April 30, 2016, Nick Confalone joked that this episode is called "twilight[sic] gets banished to the moon for ruining dinner".[3]

The scene when Rainbow Dash attempts her own trick and crashes during the Wonderbolt show reappears in Deep Tissue Memories.

The episode opens with Rainbow Dash flying through Ponyville. Scootaloo calls out to her and says everyone in the Rainbow Dash Fan Club will be going to watch her perform with the Wonderbolts when their new tour comes through town. Rainbow thinks her position in the Wonderbolts Reserve likely means she won't be performing, Scootaloo says seeing her in a Wonderbolts uniform will be good enough.

As the Wonderbolts arrive to Ponyville, Spitfire flies down to meet Rainbow Dash. She offers Rainbow a spot to perform in the upcoming show as well as full membership in the Wonderbolts, much to Rainbow and Scootaloo's delight.

At Rainbow Dash's cloudominium, Rainbow packs up for her trip to the Wonderbolts' headquarters. She explains to her friends that, since Fire Streak retired to become a full-time teacher, she was first pick to take his place due to being at the top of the Reserves list. Though her friends are nervous about her upcoming performance, Rainbow is confident in her own flying skills.

Later, at the Wonderbolt Academy, Spitfire shows Rainbow Dash to the Wonderbolts' barracks and instructs her on some of the team's basic regulations. After suiting up in uniform, Rainbow heads out to the field to meet the rest of the team. However, she fails to follow the Wonderbolts' most basic rule while crossing the runway, and other arriving members nearly crash into her.

In her attempt to avoid a collision, Rainbow Dash crashes into a trash can and embarrasses herself among the rest of the team. Thus, they designate her by her old nickname from flight school: "Rainbow Crash".

Rainbow practices with the other Wonderbolts for the upcoming show in Ponyville, but her new nickname serves as a constant distraction, causing her to under-perform or slip up. In addition, in accordance with the Wonderbolts' own set of rules, Rainbow is forced to clean up the barracks for being the worst flyer of the day.

Upon returning home, Rainbow discovers that her friends have put together a surprise party in honor of her first day as a true Wonderbolt. However, they notice her lack of excitement, and she confesses that her first impression on the Wonderbolts was not a good one. Rainbow's friends encourage her to find a positive way to impress the Wonderbolts, with Twilight suggesting that she think of them like her friends: they are a team, but they each stand out in different ways.

The next day, Rainbow Dash takes Twilight's advice quite literally. She tries to make an impression on the Wonderbolts by acting like her friends, imitating their personalities and mannerisms. Unfortunately, her behavior only alienates the rest of the team further, and they persistently address her by her nickname. Spitfire has even had "Rainbow Crash" printed on Rainbow's official Wonderbolt jacket.

"If I don't come up with something unforgettable to add to the routine, I'm gonna be "Rainbow Crash" for the rest of my life!"
— Rainbow Dash

On the day of the Wonderbolts' performance in Ponyville, a large crowd of ponies gathers to spectate, including Rainbow's friends and the Cutie Mark Crusaders. In a last-ditch attempt to impress her teammates, Rainbow Dash recruits Scootaloo for a plan that involves kicking a storm cloud into Rainbow's path to make an electric display in her performance.

As the show gets underway, the Wonderbolts excite the audience with their aerial acrobatic feats. Near the end of the performance, Rainbow Dash gives Scootaloo her signal to kick the storm cloud into position. Unfortunately, she gives the signal too soon, resulting in a humiliating chain reaction that sends her crashing into Pinkie Pie's cotton candy below. As Spitfire reprimands her, she adds insult to injury by calling her "Rainbow Crash" again.

A short while later, after Rainbow Dash is nursed for her injuries, Spitfire chews her out for changing the routine without permission and endangering other ponies. Rainbow Dash apologizes and says she deserves the name "Rainbow Crash" for her mistakes, admitting she might not be Wonderbolt material.

Her teammates testify, however, that she is a perfect candidate for being an amazing flyer and saving Equestria multiple times. They also add that they each have nicknames just as embarrassing as "Rainbow Crash". Rainbow Dash learns the virtue of fitting in instead of standing out, and she is allowed to stay on the team, but Spitfire gives her one month's probation.

Later that evening, Rainbow's friends find her cleaning up the performance grounds by herself. As part of her probation, she is also tasked with cleaning the Wonderbolts' compound for a month. However, she maintains a positive and upbeat attitude. When her friends ask why, she answers:

Twilight Sparkle: Everypony knows you're a great flyer, Rainbow Dash, but so are the rest of the Wonderbolts. It might be more challenging than you think.
Rainbow Dash: Aw, you're right! I mean, do I show up wearing sunglasses or not? Sunglasses are automatically cool, but anypony can put them on. Maybe I'd stand out more if I didn't.

Pinkie Pie: Well, look at the bright side! At least they didn't call you Rainbow Trash!

Rainbow Dash: Couldn't you just put my regular name on it?!
Spitfire: That's not how it works around here. We all have our nicknames on our jackets.

Fluttershy: I hope Spike and Pinkie Pie are done getting their snacks, or they're gonna miss Rainbow Dash!
Rarity: Oh, don't worry, Fluttershy. Nothing would keep Pinkie Pie from missing this!
Applejack: Heh. Except maybe cotton candy.

Pinkie Pie: Hope I'm not too late. [scoffs] I dunno what took that pony so long.

Rainbow Dash: You guys were right to call me "Rainbow Crash". I've always been a standout flyer, but since I joined the Wonderbolts, I've only stood out for making mistakes. [sighs] It's been my dream my whole life, but... I guess maybe I'm not Wonderbolt material after all.

Spitfire: Of course you're supposed to be a Wonderbolt. We've been waiting for a spot to open up ever since you joined the Reserves! 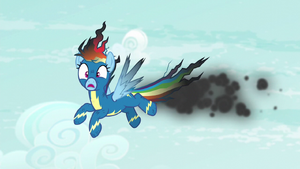