"...everypony's coming to see you when the Wonderbolts' new tour comes through Ponyville!"

"Well, it's great that you guys are going to the show, Scoot..."

"Reservists aren't in the show unless one of the real Wonderbolts can't fly." (like in Rarity Investigates!)

"I'll probably be working crowd control or something."

"You're still gonna be wearing a Wonderbolts uniform though, right?"

"A Reservist one, yeah."

"That's good enough for me."

She's going to do a superhero landing. Wait for it.

Superhero landing! You know, that's really hard on your knees.

"Rainbow Dash! Glad we found you."

"We need you in the show when we get to Ponyville."

RainbowDash.exe has stopped responding to the server.

"But she's only in the Reserves!"

Gasp! Are you sure this isn't a coming of age series?

"You're finally a full-fledged Wonderbolt!"

"Okay, you're about to take your first flight as an actual Wonderbolt."

"Okay, Wonderbolts, get ready to meet your most awesome member ever!"
Add a photo to this gallery

"Are you okay, Rainbow Dash?"

Are you alright, Dashie?

How would YOU feel if somepony said those things to YOU?

Yikes! Even the teacher?

You are Crash, now!

"Well, look at the bright side!"

"At least they didn't call you Rainbow Trash!"

Man, Ashleigh Ball must've been having fun with this one!

You sure you're not Moon Dasher?

I'll just put these in the suggestions pile...

"In fact, a lot of ponies call me 'Reading Rainboom'."

"We all know how wings work, newbie!"

"And we already have checklists!"

"Now get off the runway!"

Seriously, Hasbro! What ever happened to words?

They should've brought Starlight. She has never seen a show.

Where are you going, Dash?

"I dunno what took that pony so long."

Ugh.
Add a photo to this gallery

After the catastrophe / The other Wonderbolts' nicknames

"You gonna tell us what just happened, newbie?"

"I should hope so. You changed the routine without consulting me..."

"...and put other ponies at risk. I've drummed flyers out of the 'Bolts for less."

Shame on you, RC.

"I know, and I'm ready for whatever punishment you want."

"You guys were right to call me 'Rainbow Crash'."

"I've always been a standout flyer..."

"I've only stood out for making mistakes. *sigh* It's been my dream my whole life, but..."

"...I guess maybe I'm not Wonderbolt material after all."

"You're the most talented flyer we've ever had!"

"And you've saved all of Equestria like, a dozen times."

"Of course you're supposed to be a Wonderbolt."

"We've been waiting for a spot to open up ever since you joined the Reserves!"

"But... you guys all called me Rainbow Crash."

"Yeah, so? My nickname's 'Clipper'. You know why they call me that?"

"Because I clipped my wing on a flagpole as I was landing on my first day. Heh."

"My first day, I misjudged my landing..."

"...and came down right on Spitfire's hoof."

"You don't wanna know what they call me."

No, because that nickname would be VERY stupid.

"Whoa! That is so much worse than Crash."

"Do you think you can be part of this team and not constantly try to showboat?"

"I promise! I spent my whole life trying to be a standout flyer, but now that I'm a Wonderbolt..."

"it's time to be okay with fitting in!"

"...because I really didn't want to miss the chance to tease you for years about this catastrophe!"

"I mean, that crash was epic!"

"Got a problem with that?!"

Wonderbolt Dash is happy.
Add a photo to this gallery

It's great to be a Wonderbolt

"Hey. Rainbow Dash. We just wanted to check on you."

"Are you doing okay?"

"Sure you don't need any help?"

"Nah. This mess is my responsibility, and I've gotta clean it up myself."

"And after this, Spitfire's got me cleaning the Wonderbolts' compound for the next month."

"So why are you in such a good mood?"

"Because I'm a Wonderbolt!"

A dream has finally been achieved.
Add a photo to this gallery 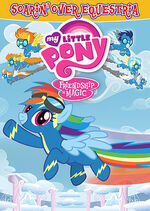