Night Glider is a female Pegasus pony who first appears in the season five premiere. She is a resident of a village, led by Starlight Glimmer, in which its inhabitants have all given up their cutie marks. In the episodes in which she appears, Night Glider is never referred to by name, being named only in the credits and in merchandise and other media.

Night Glider first appears in The Cutie Map - Part 1 welcoming Fluttershy and her friends to Our Town, and she also flies over the village at the end of In Our Town. Later in the episode, she, Sugar Belle, and Party Favor express enthusiasm toward the Mane Six and their connections to Princess Celestia, not having completely conformed to Starlight Glimmer's ideology. She informs the six about the "Staff of Sameness" that Starlight uses to remove others' cutie marks and the vault in which their marks are kept.

In The Cutie Map - Part 2, when Fluttershy appears to convert to the town's ways, Starlight Glimmer asks her to identify the ponies who told the Mane Six about the vault. Party Favor takes the blame for Night Glider and Sugar Belle, protecting them from punishment.

Later, Fluttershy exposes Starlight Glimmer to the villagers, who learn that Starlight still has her original cutie mark and that the "Staff of Sameness" is an ordinary piece of wood used to hide her own magic. Night Glider reclaims her cutie mark alongside the other betrayed villagers, and joins Sugar Belle, Party Favor, and Double Diamond in pursuing the retreating Starlight through the mountains to recover the Mane Six's cutie marks. After Starlight escapes, Night Glider decides to stay in the village with her friends as it has become their home.

She is seen again at the end of The Cutie Re-Mark - Part 2, where she and the other ponies at the village are shown forgiving Starlight for her actions. In To Where and Back Again - Part 1, Night Glider appears among her fellow villagers celebrating the town's Sunset Festival. She also appears at the end of Part 2.

She appears at Starlight's graduation ceremony in Celestial Advice. She appears at a table with Party Favor in Hard to Say Anything.

In The Big Mac Question, Night Glider appears in attendance of Big McIntosh and Sugar Belle's wedding. In The Ending of the End - Part 2, she appears in Cloudsdale as the Pegasi close off the sky, and then later takes part in the final battle against Queen Chrysalis, Lord Tirek, and Cozy Glow. In The Last Problem, Night Glider briefly appears in Rainbow Dash's group shot during The Magic of Friendship Grows.

In My Little Pony The Movie, Night Glider appears during the opening shot of Canterlot during We Got the Beat.

Night Glider is a character in Gameloft's mobile game. The game's description of her states, "With a love of flight and fur as black as the night, Night Glider's a pony who's truly earned her name!"

"Do you know Princess Celestia?"
— The Cutie Map - Part 1

"How can you be friends with different cutie marks? Don't you end up hating each other?"
— The Cutie Map - Part 1

"The cutie unmarking is a beautiful experience! Starlight uses the Staff of Sameness to magically take them away and replace them with these."
— The Cutie Map - Part 1

"Maybe you can reminisce another time! She's almost to the caves!"
— The Cutie Map - Part 2 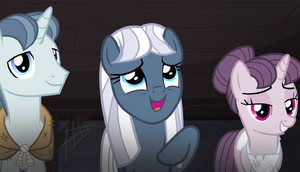