No Second Prances is the sixth episode of season six of My Little Pony Friendship is Magic and the one hundred and twenty-third overall. The title is a play on the common phrase "no second chances".

Jim Miller stated regarding Trixie's return, "We always wanted to bring her back. It was just a matter of finding a good place to do that."[1]

The original title for this episode was "Old Dog, New Trixie", which was changed to keep the episode's plot a surprise.[2]

In an Equestria Daily interview posted on April 19, 2016, Cranky Doodle Donkey's English voice performer Richard Newman mentioned having been in three voicing sessions;[3] this seemingly hinted at his speaking role in this episode, as only two episodes had featured such voiced dialogue.

One of Trixie's poses is the same as in the earlier-released "One Million Friends" poster on the My Little Pony Facebook page.[5]

At the Castle of Friendship, Twilight Sparkle tries to give Starlight Glimmer another friendship lesson that involves setting a dinner table without using magic. However, Starlight swiftly sets the table using magic, to Twilight's mild disappointment. The two are expecting a visit from Princess Celestia to update her on the progress of Starlight's lessons.

When Starlight notices that an extra place has been set at the table, Twilight explains that she must bring a new friend to the dinner to demonstrate her progress. Starlight, unsure about making new friends, jokingly suggests "forcing friendships by magically enslaving the entire population of Ponyville".

Starlight goes around town to try and make a new friend. Pinkie Pie introduces her to Mrs. Cake, but her attempt to impress with a magically whipped-up cake sends the wrong message. Applejack introduces Starlight to the laconic Big McIntosh, but her use of magic to make him more talkative angers Applejack. Rarity tries to help Starlight meet ponies by making her an elaborate dress, but it wouldn't be ready in time for Twilight's dinner the next evening. Rainbow Dash suggests that Starlight meet Spitfire of the Wonderbolts, but Starlight doesn't know who the Wonderbolts are. She briefly gets along well with Fluttershy's animal friends, but she doesn't think they are what Twilight had in mind.

To get her mind off her growing stress, Starlight gets a spa treatment at the Ponyville Day Spa. There, she meets a pony who is also from out of town and burdened by a dark past, and she is happy to finally meet someone she can relate to.

Back at the castle, Twilight finishes setting the dinner table. Starlight suddenly enters, thrilled to inform Twilight that she made a new friend. Twilight shares in Starlight's excitement until she reveals who her new friend is: Trixie.

After a tense reunion with Twilight, Trixie explains that she is giving a magic show in Ponyville as part of her "apology tour" across Equestria. Twilight pulls Starlight aside and expresses uncertainty in her and Trixie's friendship given their respective pasts. Starlight argues that Twilight should place trust in her student just as Celestia placed trust in hers, and Twilight hesitantly agrees.

While Trixie sets up her stage, bypassing ponies give her distrustful looks, giving her doubts about the value of second chances. Having overheard what Twilight said about her at the castle, Trixie says she understands if Starlight doesn't want to be her friend. When Starlight proves her feelings to be genuine, Trixie confesses that her past actions were out of jealousy toward Twilight, and she wanted to beat her at something.

As Trixie shows Starlight to her wagon, Twilight appears to give Starlight friend alternatives, including DJ Pon-3, Derpy, and Cranky Doodle Donkey. Offended by Twilight's distrust and undue concern, Starlight says she wants to make friends on her own.

A short while later, Starlight and Trixie discuss Trixie's upcoming show, and Trixie seeks to perform the "Moonshot Manticore Mouth Dive", a dangerous magic trick previously only pulled off by pony magician Hoofdini. She is nervous about attempting the trick by herself, but Starlight offers to be her stage assistant, giving her more confidence. Unfortunately, Trixie's show falls on the same evening as Twilight's dinner party with Princess Celestia, leaving Starlight with a difficult choice.

The show must go on

At the Castle of Friendship, Celestia arrives for Twilight's dinner party, but Starlight Glimmer has yet to arrive. Twilight tries to pass off DJ Pon-3, Derpy, and Cranky Doodle Donkey as Starlight's new friends, but Celestia appears unconvinced. Desperate to salvage the evening, Twilight goes looking for Starlight, eventually finding her about to go onstage with Trixie.

Twilight confronts Starlight about missing the dinner and being friends with Trixie, revealing that she doesn't completely trust her. Trixie reveals that she partly became friends with Starlight just to beat Twilight at something. Despite Trixie telling her that she got carried away, Starlight is convinced that no one wants to be her friend, and she runs off in tears. Trixie attempts to play it off, but Twilight notices that she is distraught over driving her only friend away.

Trixie puts on her show as planned, but her delivery is flat and unenthusiastic as a result of her falling out with Starlight; regardless, she intends to go through with the Moonshot Manticore Mouth Dive. On a nearby hill, Twilight approaches the heartbroken Starlight and apologizes for trying to pick and choose her friends for her. She realizes she was wrong about Trixie and encourages Starlight to make her own decisions.

At the very climax of Trixie's magic trick, Starlight returns to make it a success, and the audience loudly cheers. As the two take a bow, Trixie introduces Starlight as her "great and powerful assistant and best friend".

Backstage, Trixie and Starlight reconcile with a hug. Twilight enters to apologize to Trixie for not trusting her and to commend her for her performance. Trixie humbly accepts Twilight's apology and praise, and she closes out her show with a fireworks display.

The episode closes on the dinner party with Celestia, DJ Pon-3, Derpy, and Cranky still awaiting Twilight and Starlight's return. Cranky casually asks Celestia about her mane, much to her annoyance.

Twilight Sparkle: Well, if you hadn't used magic, you'd have heard me say, uh... this plate represents your head, this spoon is your heart, and the knives... are sharp! Always be careful with knives. [sigh] The metaphors make more sense when you're actually setting the table.

Applejack: I think I have just the pony for you, Starlight. Meet Big Mac!
Big McIntosh: Eeyup!
Applejack: He's not much of a talker.
Big McIntosh: Nnope.
Starlight Glimmer: Oh, that's too bad. I love a good conversation.
[magic wisps]
Big McIntosh: [motormouth] Eeyup-yup-yup-yup-yup-yup-yup-yup-y-y-y-y-you did something! Whoa! What's happening? I feel really weird! I'm talkin' so much! And I'm so articulate! Enunciating with such precise pronunciation! Annie Apple awoke and accidentally ate an auburn azalea! [screams] Make it stop!

Trixie: The Grrrreat and Powerful Trrrrixie has come to perform a new stage show of grand illusion! I am calling it "The Humble and Penitent Trixie's Equestrian Apology Tour"!
Starlight Glimmer: [hushed] That's kind of a mouthful.
Trixie: [hushed] It's a working title.

Cranky Doodle Donkey: Starlight Glimmer? I thought you said "nosehair trimmers"! What's going on? I'm hungry! And my nose is too hairy. [snorts]

Pinkie Pie: So this is the Humble and Penitent Trixie's Equestrian Apology Tour?
Applejack: Ain't that a mouthful of molasses.
Trixie: It's a working title!

Cranky Doodle Donkey: How do you get your hair to do that all the time?
Princess Celestia: [sighs] 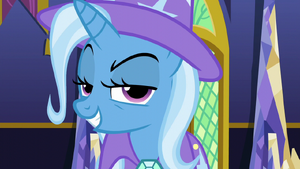