She shares her design with Aura and "Piña Colada".

Noi first appears in Call of the Cutie in Cheerilee's class with a magnifying glass as her cutie mark; she later appears at Diamond Tiara's cute-ceañera with a pillow (and later a chocolate ice cream) cutie mark.

In Lesson Zero, Noi appears in Twilight Sparkle's vision of magic kindergarten and in Ponyville playing jump-rope with "Ruby Pinch" and "Piña Colada".

In Luna Eclipsed, Noi dresses as a fairytale princess for Nightmare Night and gets candies from Twilight alongside "Piña Colada" and "Princess Erroria". She competes alongside Golden Harvest in the Sisterhooves Social, and she watches Apple Bloom show off her loopty-hooping skills in The Cutie Pox.

Noi appears as part of the Rainbow Dash fan club in The Mysterious Mare Do Well and gets an autograph from Rainbow Dash in one scene. She is also cheered up by Pinkie Pie in A Friend in Deed during the Smile Song. In Ponyville Confidential, Noi has a brief speaking role while reading a story about Snips and Snails in the Foal Free Press.

Noi appears in Flight to the Finish exiting the Ponyville Schoolhouse. In Rainbow Falls, she appears alongside Liza Doolots. In Pinkie Pride, Noi appears with Golden Harvest once more. During Pinkie the Party Planner, Noi sings with the crowd. Later in the episode, she appears when Cheese Sandwich displays his hippo. She watches Pinkie Pie and Cheese during The Goof Off and attends Rainbow Dash's birth-iversary. In Simple Ways, Noi appears when Mayor Mare is giving her announcement. Later in the episode, Noi appears when Rarity has Apple Bloom wear one of her designs. In Filli Vanilli, Noi appears during the turkey call competition. She also appears in Twilight Time. In Inspiration Manifestation, Noi and Aura watch as Pinkie Pie trots through the fair with balloons.

In The Cutie Map - Part 1, Noi welcomes the Mane Six to Our Town. In her "cutie unmarked" appearance, Noi's mane is more orange. At the end of The Cutie Map - Part 2, Noi celebrates with the other villagers, standing with "Ruby Pinch" and S05E02 Unnamed Unicorn Mare #1. In Rarity Investigates!, she also appears spectating the Wonderbolts's practice aerial display in Canterlot with Cherry Fizzy. In Brotherhooves Social, she appears competing at the Sisterhooves Social at Sweet Apple Acres with Golden Harvest and compete in the obstacle course. In Crusaders of the Lost Mark, she appears at the Ponyville Schoolhouse during The Vote for Student Pony President and later walks across a bridge with Cherry Fizzy during The Pony I Want to Be.

In The Gift of the Maud Pie, Noi makes a background appearance at a toy stand in Manehattan with Ruby Splash. In Newbie Dash, she appears by a cotton candy stand with an unnamed mare at Rainbow Dash's first show with the Wonderbolts. In A Hearth's Warming Tail, she makes a background appearance walking through past Canterlot with Ruby Pinch in Twilight's telling of "A Hearth's Warming Tale". In The Fault in Our Cutie Marks, she makes a cameo appearance attending Gabby's cute-ceañera in front of Ponyville Town Hall.

In Forever Filly, she appears in the audience of foals for Claude's puppet show and later in line for Twisty Pop's balloon animals in the park. In Parental Glideance, she appears spectating the Wonderbolts' showcase in Canterlot and later at their photo shoot for foals. In Fame and Misfortune, she appears as part of Rainbow Dash's fans, and later as one of the Sweet Apple Admirers eating at Sweet Apple Acres. In Secrets and Pies, she appears in Ponyville talking with Aura and Rainy Feather before they are manipulated by Rainbow Dash into eating Pinkie Pie's pies.

In My Little Pony Equestria Girls: Forgotten Friendship, Noi appears alongside Golden Harvest at the entrance of the Canterlot Library in its second establishing shot.

"[crying] But I wanted to be a zombie next year!"
— Luna Eclipsed

""Snips and Snails in Bubblegum Veils! And that's when the biggest jokester in school really stuck his hoof in it – literally!""
— Ponyville Confidential 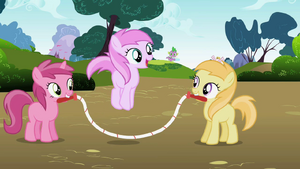