Non-Compete Clause is the ninth episode of season eight of My Little Pony Friendship is Magic and the one hundred and seventy-eighth overall. The title is in reference to a legality in contract law.

In this episode, Applejack and Rainbow Dash take their friendship students on a teamwork learning field trip and accidentally show the students how to not work together.

Ashleigh Ball was nominated for a 2019 Leo Award for "Best Voice Performance in an Animation Program or Series" for her work in the episode.[1]

Teacher of the month

Rainbow Dash races to the School of Friendship to hear the announcement for the "Teacher of the Month" award, given to the school's most popular teacher according to student vote. Much to Rainbow and Applejack's disappointment, the award once again goes to Fluttershy. Next, Twilight Sparkle wants to organize a new student activity that promotes teamwork and outdoor recreation. To that end, she announces a teamwork field trip—which she feels is a job that a Teacher of the Month would be worthy of leading.

Applejack and Rainbow Dash both volunteer for the task, believing their respective lifestyles and everyday jobs qualify them to lead a field trip. As they start to argue over which of them is more qualified to lead, Fluttershy suggests they lead the field trip together, and Twilight agrees. Rainbow Dash and Applejack agree that, although they have been competitive in the past, they will not let that get in the way of their students' education.

Twilight, Applejack, and Rainbow Dash escort Silverstream, Sandbar, Gallus, Yona, Ocellus, and Smolder out into the field for their trip. Applejack and Rainbow have a brief disagreement over which of their planned activities to do first, but they try to maintain a shared position in leadership. As the class begins their first outdoor activity, Twilight leaves and says she'll check up on them later.

Applejack leads the class in the teamwork-building exercise of constructing an apple shed. While she directs the class to work slowly and carefully, Rainbow Dash wants to work quickly so that they can get to the activity she has planned. This results in more disagreements between the two teachers as they argue over who is more qualified to be Teacher of the Month, and the students become uncomfortable being forced to decide between them.

Later, Rainbow Dash leads the class in river-canoeing, wanting in particular to break the river-canoeing speed record. While the students cooperate well and help Yona overcome her fear of the water, Applejack and Rainbow Dash continue to argue—to the point of paddling the canoe in opposite directions. When the canoe finally moves down the stream and heads toward a split path, the two teachers give conflicting instructions, causing the canoe to crash into the rocks.

After Ocellus and Silverstream help Yona because of her inability to swim, Twilight returns to see how things are going. When she sees the sorry state that the class is in, Applejack and Rainbow Dash cast blame on each other. Twilight admonishes the two for still letting their competitiveness get the better of them and neglecting their students' education. Because of their obsession with winning the Teacher of the Month award, Twilight says she is taking over as field trip leader.

Applejack and Rainbow Dash realize their mistakes, and they each acknowledge the leadership that the other displayed throughout the day. They ask Twilight for another chance to teach their students about teamwork, and Twilight begrudgingly agrees but says she will be picking their next activity: a nature walk.

A walk in the woods

Applejack and Rainbow Dash lead the class on a walk through the woods. When they come across a fork in the road, the students fear another argument. Instead of arguing, however, each of the two teachers keep insisting on letting the other choose which way to go. When they fail to come to an agreement, Yona takes the lead out of frustration. As a result of Applejack and Rainbow constantly deferring to each other's judgment, the class becomes lost.

Smolder flies up and sees the school across a ravine. After even further lack of agreement between Rainbow and Applejack, they eventually decide to build a bridge across the ravine, resulting in yet another disagreement over what to build the bridge out of. Applejack builds a bridge out of vines while Rainbow builds one out of tree branches. Neither bridge can support much weight, and one eventually collapses onto the other, causing Applejack and Rainbow to dangle helplessly over a stream of ravenous bite-acudas.

Back at the School of Friendship, Twilight welcomes the students back and asks what they learned. The students commend Applejack and Rainbow Dash for their bizarrely genius technique of showing them how not to work together so they would learn to do the opposite. Because of this, they nominate both Applejack and Rainbow for the next Teacher of the Month vote.

Twilight Sparkle: Who better to model the importance of working as a team?
Pinkie Pie: Um, Rarity? Fluttershy? Me? Spike? This flowerpot?

Yona: Help! Yak not swim!
Ocellus: That's okay! Your friends can change into creatures that do!

Twilight Sparkle: How's the canoeing... going?
Smolder: About as good as the apple shed building.

Twilight Sparkle: You're not teaching teamwork! You're competing with each other! I thought you were past that!
Rainbow Dash: We are! Mostly.

Sandbar: We gotta get our professors out of there! Anycreature have a plan?
Gallus: Leave 'em hangin'?
Silverstream: What?!
Gallus: I'm kidding! ...Kinda.

Twilight Sparkle: You were actually just competing the entire time, weren't you?
Applejack: To tell you the truth... yeah. 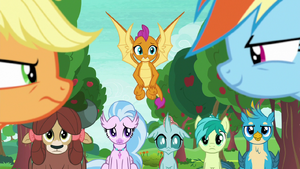