Not Asking for Trouble

Not Asking for Trouble is the eleventh episode of season seven of My Little Pony Friendship is Magic and the one hundred and fifty-fourth overall. It marks season seven's midseason finale.[1]

In this episode, an avalanche falls on Yakyakistan, and Pinkie Pie tries to convince Prince Rutherford and the proud yaks to ask the ponies for help.

This episode aired on Canada's Treehouse TV channel on May 21, 2017, twenty-seven days ahead of its scheduled premiere on Discovery Family.[2]

The episode begins with Pinkie Pie hopping excitedly to the Castle of Friendship to share big news with her friends; Prince Rutherford and the yaks of Yakyakistan have invited her to their holiday celebration of Yickslurbertfest. The rest of the Mane Six approve of Pinkie's continued relations with the yaks, and Twilight Sparkle even appoints her as the official friendship ambassador to Yakyakistan.

After a considerably long ride in the Twinkling Balloon, Pinkie Pie and Gummy arrive at the small village of Yakyakistan, where they are warmly greeted by Prince Rutherford. Pinkie finds the yaks stomping logs and other objects to pieces and fears that Yickslurbertfest has been cancelled, but Rutherford explains that stomping is a traditional part of the Yickslurbertfest holiday. After Rutherford pulls a small prank on Pinkie, she joins in the Yakyakistani traditions.

A short while later, Rutherford gives Pinkie Pie a tour of Yakyakistan and shows her the village's many features and customs. These include a ceremonial fire pit around which the yaks sit and tell stories and various mud huts specifically used for eating, sleeping, and listening to music. By the end of the day, Pinkie has absorbed so much yak culture that she adopts their unique form of speech and Rutherford considers her an honorary yak.

During the next Yickslurbertfest session of stomping, Pinkie Pie and the yaks stomp so loudly and forcefully that they accidentally trigger an avalanche; snow from the nearby mountain falls and covers the entire village. Prince Rutherford assures Pinkie that this happens during every Yickslurbertfest and that the tenacious yaks will have the snow removed shortly. However, despite Pinkie and the yaks' efforts, there is too much snow for them to dig through, and their forceful digging only causes more snow to fall from the mountain.

Pinkie Pie offers to return to Ponyville and get help from her friends, but the proud Rutherford and his subjects refuse to accept help from ponies. Rutherford suggests simply waiting for the snow to melt, and he and his subjects resort to eating and sleeping on snow to survive. Pinkie goes along with Rutherford's judgment in order to maintain her position as friendship ambassador.

Too proud to beg

Over the course of the following day, Pinkie Pie notices the yaks freezing from sleeping on the snow and eating snow-made foods. The younger yaks complain about their growing hunger but remain quiet so as not to defy their prince. Thus, Pinkie vows to convince Rutherford that it's okay to ask for help.

Pinkie Pie gathers the yaks around the new ceremonial fire pit to tell a story. Her story involves a situation very similar to that of Yakyakistan's—substituting the yaks for goats, the snow for desert sand, and the ponies for cows—and tells of how the goats reached out to the cows for help in their time of need. Unfortunately, Rutherford fails to absorb the lesson of Pinkie's story.

Pinkie then tries using reverse psychology to get Rutherford to invite the rest of her friends to enjoy the snow-covered Yakyakistan. However, Rutherford responds with a questionable tale about his childhood and reaffirms that yaks don't ask for help from others. When Pinkie starts to get desperate, Rutherford decides that she doesn't truly understand yak culture, and he revokes her honorary yak title. Frustrated by the prince's stubbornness, Pinkie Pie leaves Yakyakistan.

As Pinkie Pie returns to Ponyville, Prince Rutherford and the yaks consign themselves to their new snow-filled lifestyle—despite growing unrest among the yaks toward their prince's leadership. Meanwhile, at the Castle of Friendship in Ponyville, Pinkie Pie explains the yaks' situation to her friends and decides to help Yakyakistan anyway. Applejack offers to bring the yaks apples to eat and Rarity offers fabrics to keep them warm, but Pinkie insists that, because the yaks are too proud to ask for help, the ponies must help them covertly.

The Mane Six return to Yakyakistan after dark and sneak into the village. As the yaks sleep, the ponies remove most of the snow, clear the storm clouds, restore their crops and hay beds, and bake fresh Yakyakistan cakes. When the yaks wake up the next morning, they are surprised to find their village back to normal. The yaks' faith in Rutherford is restored, but Rutherford notices the ponies just as they are leaving.

When Rutherford confronts Pinkie Pie outside the village gates, she fears his angry retribution, but he is instead grateful that Pinkie had the sensitivity to help his village without making them ask. Because she truly does understand yak culture, Rutherford declares her an honorary yak again and gives her a set of fake yak horns.

Prince Rutherford: Pink pony better check self before wreck self. That is century-old sacred yak twig, passed down from generation to generation.
Pinkie Pie: [gasps] Oh, no! I'm so sorry! I was just trying to get into the spirit of Yickslurbertfest. [distressed noises] Maybe I can fix it!
Prince Rutherford: [snort, laughs] Yak kidding! [grunting] Yak got pink pony good.

Prince Rutherford: Is clear now that pink pony does not understand yaks. Honorary yak status rescinded! Bang! Pretend there is door! I just slammed it!
Pinkie Pie: Fine! Be stubborn! 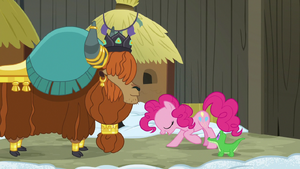 Not Asking for Trouble image gallery