Nurse Redheart is a female Earth pony who works as a nurse at Ponyville Hospital. She has a white coat, pink mane and tail, blue eyes, and a varying cutie mark at least of a medical cross with a heart in each corner. She wears a nurse's cap that bears an emblem with the same design as her cutie mark.

Nurse Redheart shares her design with "Nurse Tenderheart" and an Earth pony mare shown on Hasbro's My Little Pony Facebook page,[1] and she shares the same coat, mane, and eye colors as the G1 Earth pony Nurse Sweetheart, though they do not have the same cutie mark.

Nurse Redheart makes her first appearance in Applebuck Season alongside "Nurse Tenderheart", tending to sick ponies in a medical ward. She thanks Twilight Sparkle for coming to the ward and says "we need all the help we can get" while a pan shot of the overcrowded ward shows multiple sick ponies lying in beds or on the floor curled up and squirming, with Nurse Tenderheart standing by one's bedside.

She later appears in the episode Baby Cakes at the hospital nursery. She tells Pinkie Pie to quiet down several times when Pinkie tries to sing to the newborn Pound Cake and Pumpkin Cake right in the nursery. When Pinkie doesn't comply, she forcefully pushes her back to the visiting area where the rest of her friends are. Nurse Redheart is depicted as impatient with troublemakers, but at the same time caring for the babies she is looking after.

Redheart makes a background appearance as an audience member of the operating room in Where the Apple Lies. She also appears at the beginning of A Flurry of Emotions consulting Twilight about her upcoming visit to the sick foals at Ponyville Hospital. The latter episode's credits name her as in previous materials.

Redheart's background appearance in Where the Apple Lies reappears in Harvesting Memories.

Nurse Redheart's human counterpart appears as the Canterlot High school nurse treating Applejack's injured hand in the Choose Your Own Ending short Constructive Criticism. Here, her cross is purple instead of red. She also appears in the hour-long special My Little Pony Equestria Girls: Forgotten Friendship being interrogated by Trixie as she takes Bulk Biceps' temperature.

Nurse Redheart appears on page 13 of My Little Pony: Friendship is Magic Issue #9, tending to a concussed Fleetfoot, and—after a rather lengthy absence—on page 11 of Issue #41.

Nurse Redheart appears on My Little Pony: Ponyville Mysteries Issue #1 cover A and in the issue's story, where the Cutie Mark Crusaders help her investigate the theft of supplies from the hospital.

In My Little Pony: Friendship is Magic Issue #75, Nurse Red Heart[sic] is mentioned on page 16.

Nurse Redheart is mentioned on page 57 of My Little Pony: Discord and the Ponyville Players Dramarama.

Nurse Redheart is a character in Gameloft's mobile game.[2] The game's description of her states, "Stationed at Ponyville Hospital, Nurse Redheart is ready for any emergency -- from sudden stampedes to baking gone awry!"

A Nurse Redheart mini-figure toy was leaked in early May 2013[3] and released in a deluxe miniature set named "Cake Family Babysitting Fun" along with Pinkie Pie, Mr. and Mrs. Cake, Pound Cake and Pumpkin Cake.[4] A brushable toy of Nurse Redheart, using the later version of her cutie mark and cap emblem, with Rainbow Power packaging which states that she "always helps her friends feel better!", was released in September 2014 as a Walgreens exclusive.[5]

In the Canterlot Nights expansion set of Enterplay's collectible card game, Nurse Redheart's card #95 R gives her the description "Nurse Redheart has impeccable bedside manner, but she doesn't extend that courtesy to visitors who disturb her patients!"

Nurse Redheart, with the later version of her cutie mark and cap emblem, appears on the cover of a My Little Pony Coloring & Activity Book by Bendon.

She appears on the fan-designed WeLoveFine T-shirt "Nurse Redheart".

Nurse Redheart: Oh thank you, Twilight. We need all the help we can get.
Twilight Sparkle: Oh no! What happened?
Nurse Redheart: It was a mishap with some of the baked goods.

A Flurry of Emotions

Nurse Redheart: Oh, Princess Twilight! Everypony in the hospital is so excited for your visit today!
Twilight Sparkle: I'm never too busy to visit sick foals. I can't believe a whole class just came down with the horsey hives!
Nurse Redheart: On school picture day, too.
Nurse Redheart: Oh, the poor dears really do need cheering up.

Nurse Redheart: I think she has a concussion. We should get her off the street... Are you with her?

Nurse Redheart: Let's get you to the first aid tent, dearie. 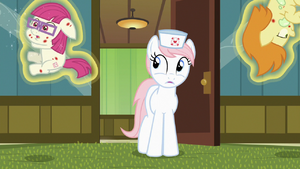