Start a Wiki
Nurse ponies are ponies who work as nurses at Ponyville Hospital and appear in Applebuck Season, Read It and Weep, Where the Apple Lies, and other episodes. Most are unnamed in the show, "Nurse Sweetheart", "Nurse Tenderheart", and "Nursery Rhyme" being placeholder names, but Nurse Snowheart is named in merchandise and other media.

Nurse Snowheart has a yellow coat, two-tone light blue mane and tail, green eyes, and a cutie mark of a white cross with a pink heart on each corner. She resembles "Cultivar" in color scheme and eye style.

Nurse Tenderheart has a bluish gray coat, light green mane and tail, purple eyes, and a cutie mark of a red cross. She shares her design with Nurse Redheart and an Earth pony mare shown on Hasbro's My Little Pony Facebook page,[2] and she resembles G1 Nurse Tenderheart.

Nursery Rhyme has a gray coat, dark red mane and tail, purple eyes, and a cutie mark of a white cross with a pink heart on each corner. She shares her design with Twist.

In Read It and Weep, Nurse Sweetheart first appears pushing a bookmobile outside Rainbow Dash's hospital room. She later dismisses Rainbow's friends from the room when visiting hours are over. Later in the episode, Nurses Sweetheart and Snowheart cart Rainbow Dash out of bed and in a wheelchair when she's discharged from the hospital.

When Rainbow Dash sneaks back into the hospital to read the rest of Daring Do and the Quest for the Sapphire Stone, the hospital staff catches her and mistakes her for a thief. When the filly Nursery Rhyme attempts to block Rainbow's path, Rainbow simply flies over her. Nurse Sweetheart then chases her across Ponyville alongside Doctor Horse, Night Watch, and Screwy.

In Just for Sidekicks, Nurse Snowheart appears talking with Screwy in front of her house.

In The One Where Pinkie Pie Knows, Nursery Rhyme briefly appears partying with other ponies near a lake and wearing a life jacket.

In Where the Apple Lies, Snowheart, Sweetheart, Tenderheart, and multiple additional nurses appear throughout Ponyville Hospital and in the audience of the operating room.

In Between Dark and Dawn, Nurse Sweetheart appears treating Princess Luna's sunburn. Here, she is a unicorn instead of an Earth pony.

Nurse Snowheart is a playable character in Gameloft's mobile game, added in the version 4.3 update. Her in-game description states, "If you ask this medical mare nicely, she'll push you around in a wheel chair -- just like she did for Rainbow Dash that one time!" Nurse Sweetheart and Nurse Tenderheart are also featured as "Cheerful Nurse" and "Diligent Nurse" respectively. Cheerful Nurse's in-game description states, "Cheerful ponies are a dime a dozen, but when one of them is giving you shots and checking your vitals, it's bound to make you feel more comfortable!" Diligent Nurse's in-game description states, "She may be a hard worker, but this mare can only change the bed sheets in the clinic so many times before she needs a snack break!"

A mini-figure toy and a collector card of Nurse Snowheart are packaged together as part of the ninth wave of mystery packs. According to the card, she "is always ready to lend a helping hoof!" Her name comes both from the card and from the packaging of the wave, which each list the name as a trademark. A November 6, 2013 "vorläufige Abbildung" image for mystery packs also includes her.

"All right, my little ponies. Rainbow Dash needs her rest. You'll have to come back tomorrow."
— "Nurse Sweetheart", Read It and Weep

"Honestly, princess, didn't you wear any sunblock?"
— "Nurse Sweetheart", Between Dark and Dawn 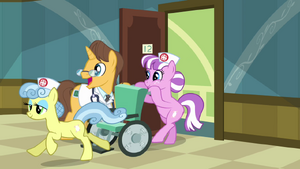 Retrieved from "https://mlp.fandom.com/wiki/Nurse_ponies?oldid=2105370"
Community content is available under CC-BY-SA unless otherwise noted.