Octavia Melody is a background Earth pony who first appears in the season one finale episode The Best Night Ever. She has a dark gray mane and tail, a light gray coat and light purple eyes, and she wears a pink bow-tie with a white collar. Her cutie mark is a violet treble clef. She is simply called Octavia in some merchandise and other media.

Octavia Melody shares her design and cutie mark with Fiddly Twang, her design with "Spring Harvest", and her eye design with Rarity, the spa ponies, and several background ponies, except for the iris. The origin of the name "Octavia" is attributed to both Alex McG in a comment on May 7, 2011, and a Blogger commenter going by the nickname "Octavia."[3] This fan-given name was officially adopted in Enterplay's cards and in Gameloft's mobile game each in 2012 and used in one of Little, Brown's chapter books, being expanded to "Octavia Melody" in Hasbro's toy line and in Funko's vinyl figure line each in 2013. She is first referred to by name in the season nine episode A Horse Shoe-In. The name "Octavia" likely refers to the musical concept of octaves, whereas "Melody" refers to the term of the same name.

While the show does not specifically identify Octavia Melody's instrument, cards state that it is a cello. William Anderson, the show's composer, has relayed to Equestria Daily that the music playing at the garden party in Sweet and Elite features a harp, two violins, and a cello, which pegs Octavia as a cellist.[4] The show's director, Jayson Thiessen, figures the instrument is a cello as it's "more sophisticated and appropriate for the gala."[5] Meghan McCarthy has indirectly referred to Octavia's role in Inspiration Manifestation as "cello playing."[6]

She plays a cello as part of a four-pony musical ensemble at the Grand Galloping Gala in the episode The Best Night Ever. She retains an apparently calm and dignified expression when in costume, except when Pinkie Pie disturbs her. At Pinkie's request, the orchestra plays the Pony Pokey. Octavia Melody eventually falls over when Pinkie tries to make her play faster.

Octavia appears briefly in Sweet and Elite in the garden party scene, playing with a mostly different musical ensemble.

Octavia appears in Inspiration Manifestation, switched from S04E16 Unnamed Earth Stallion #2 by a cursed Rarity during a filly's birthday party. In the episode Equestria Games, she is barely seen in the audience as Spike attempts to light the torch.

In Bloom & Gloom, in Sweetie Belle's dream, Octavia, seated at a table with DJ Pon-3 and Rarity, watch Sweetie about to sing on stage, but Sweetie suddenly discovers a broom as a cutie mark, and her microphone is replaced with a broom. As a result, both Octavia and DJ-Pon-3 give Sweetie a score of "0", while Rarity gives her a score of "1".

Octavia has her first in-show speaking role in Slice of Life, in which she speaks with an upper-class British accent. In the episode, Octavia is revealed to be DJ Pon-3's housemate, and the two compose an "electric cello dubstep" musical piece for Cranky Doodle Donkey and Matilda's wedding. The credits name Octavia Melody as in (some) previous materials. She or Fiddly Twang appears silhouetted playing the cello during The Magic Inside in The Mane Attraction. She and DJ Pon-3 appear during the final group shot in The Cutie Re-Mark - Part 2.

In On Your Marks, Octavia appears at the recital seated next to Lyra Heartstrings and Sweetie Drops.

In 28 Pranks Later, Octavia takes part in a city-wide zombie-themed prank on Rainbow Dash. In The Fault in Our Cutie Marks, Octavia appears receiving help from Gabby during Find the Purpose in Your Life and later at Gabby's cute-ceañera.

In A Flurry of Emotions, Octavia appears at Spearhead's art exhibit. In Parental Glideance, she appears in the crowd at the Wonderbolts showcase.

In The Perfect Pear, Octavia appears in the very beginning talking to Chelsea Porcelain. In It Isn't the Mane Thing About You, she appears next to DJ Pon-3 at the Ponyville marketplace.

Octavia appears at Maud Pie's party in The Maud Couple, and she appears in Yakity-Sax walking through Ponyville and watching the Wonderbolts show.

In My Little Pony Best Gift Ever, Octavia makes a cameo appearance playing her cello beside DJ Pon-3 in Ponyville Square during One More Day.

In The Beginning of the End - Part 2, Octavia appears brainwashed by King Sombra and part of his raid of Canterlot Castle. In She's All Yak, she appears in the reused image of The Cutie Re-Mark - Part 2 during Fit Right In.

In A Horse Shoe-In, Octavia applies for the position of vice headmare at the School of Friendship. She passes each stage of Starlight Glimmer's candidate-interviewing process but eventually turns the job down due to conflicts with her music schedule. In The Big Mac Question, Discord mentions that Octavia went out on a date with Bulk Biceps.

In The Last Problem, Octavia briefly appears in Rainbow Dash's group shot during The Magic of Friendship Grows.

Octavia appears providing music at the Festival of Friendship in My Little Pony The Movie.

In My Little Pony/Transformers II Issue #3, Octavia and DJ Pon-3 find the Young Six after they were transported to Cybertron, and they work together with Soundwave to free themselves from being trapped under tons of Cybertronian steel.

Octavia is mentioned twice in Pinkie Pie and the Rockin' Ponypalooza Party! In chapter 8, "Pinkie-less Party Planning," Applejack says "I heard that Octavia might know the bassist from Nine Inch Tails." In chapter 13, "Pinkie Takes Action!" Pinkie Pie mentions Octavia as being a musician.

In Princess Luna and the Festival of the Winter Moon, Apple Bloom mentions Octavia when she says that she and DJ Pon-3 loaned the Crusaders some moonglasses for the titular festival.

An image of Octavia holding her cello and its bow was added to the Hasbro website's Card Creator game around January 25, 2012, named "MLP_CharV_WhomeverThisIs.swf."[8] The file was included with the same name when the game was added to the Hubworld website around February 2, 2012.

Octavia, wearing her collar and bow tie, is one of the available playable characters in Gameloft's mobile game, and serves as a boss battle helper during the "Rarity's Retro Revolution" event. The game's icon of her used fanart[9] depicting her as a filly[10] until June 13, 2013, though her in-game character model matches her usual appearance.[11]

Part of a four-pony musical ensemble, this talented cello player can be seen performing in Ponyville's most sophisticated celebrations.

Octavia Melody appears in The Royal Wedding, in a photograph in All About Alicorns, and in Hearth's Warming Eve.

A Octavia Melody miniature collectible[12] featuring her playing her cello was displayed at the 2013 New York Toy Fair.[13] It was later released as part of a 3-piece set alongside Lyrica Lilac and Lyra Heartstrings, called the "Groovin' Hooves Set".

Octavia, along with a host of other characters from the show, appears on the Comic Con 2011 promotional poster. She is wearing her collar and bow tie and holding her cello and its bow.

An Octavia Melody vinyl figure by Funko was released.[14]

Base collectible trading card #27 of 84 is DJ Pon-3 & Octavia, with the description "DJ Pon-3 and Octavia may both be at the top of their musical games, but their careers are very, very different! You can find Octavia at garden parties and galas performing prim and proper classical music on her cello. On the other hoof, DJ Pon-3 feels at home behind her turntable, laying down sick beats and wearing her trademark sunglasses. Are these two bitter rivals, or are they long time friends? Will they ever perform a duet? Only time will tell!"

Octavia also appears in Enterplay's collectible card game. Card α #103 U, A Touch of Refinement, attributes to her the quote "There are few social engagements not improved by the proper musical accompaniment."[15] Card α #205 UR gives her the description "Octavia has many acquaintances in the musical world, but never expected to meet one of her closest friends performing at a Canterlot night club." Canterlot Nights expansion set card #32 C of Doc Top attributes to him and her the respective quotes "Aww, do you have a boo-boo? Who's the bwave wittle filly? Is it you?" and "... Perhaps it is time I finally found a new primary care physician."[16] Canterlot Nights expansion set card #74 U gives her the description "Classical may not be every pony's favorite genre, but almost anypony can appreciate the dulcet tones of Octavia at her cello." Rock N Rave set card #4 F gives her the description "'Octavia Melody is, without a doubt, the finest cellist of our generation.' —excerpt from The Canterlot Sun, Arts page". The Crystal Games expansion set card #Pƒ6 lists the quote "This isn't a contest, Vinyl..."[17]

WeLoveFine.com carries T-shirts and other merchandise of Octavia, often wearing her collar and bow tie and holding her cello and its bow. One of the T-shirt designs, released prior to the trading card, refers to her as "Octavia."

"A monster attack?! Blast! I'm performing at the ceremony this afternoon, and I still haven't sorted out what to play. How am I meant to practice with a monster invading Ponyville?"
— Slice of Life

"That's more like it!"
— Slice of Life and Enterplay trading card series 3 #P14 card of Octavia

"I can't believe someone ran off with our cart. Don't they know that some of us can't use magic to carry these things around?"
— Friendship is Magic Issue #9 page 9

Octavia Melody: I can't believe it, we're going to be late for our gig...
Parish Nandermane: So you're allowed to complain and I'm not?
Octavia Melody: Fine. Tell me more about your gold leaf.

"There are few social engagements not improved by the proper musical accompaniment."
— Enterplay collectible card game α #103 U card A Touch of Refinement

"I admit that I AM picky. I simply know good music when I hear it, and will accept nothing less."
— Enterplay collectible card game Equestrian Odysseys #69 R and #Pƒ6 cards of Octavia

"Laughter and singing will see us through!"
— Singing The Heart Carol, Enterplay collectible card game Defenders of Equestria #44 C card of Octavia 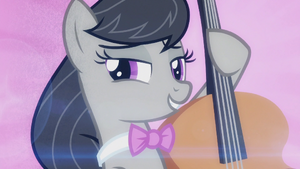