Octavia Melody's human counterpart appear in the My Little Pony Equestria Girls franchise. She is a student at Canterlot High School.

Octavia first appears in the cafeteria during the Dazzlings' song. During the Battle of the Bands, she is pitted against the Rainbooms, but she is eliminated. She also has one speaking line in the film, after Sunset Shimmer disrupts Rainbow Dash's singing in front of the students.

Octavia appears in the audience during the Friendship Games pep rally. In a majority of her scenes, she is seen talking to Trixie.

In Legend of Everfree, Octavia makes multiple background appearances as one of the Camp Everfree campers.

In the half-hour special Dance Magic, Octavia appears having lunch in a diner with Sandalwood.

The Get the Show on the Road title card background text includes "OTVA MLDY" horizontally flipped.

In the second season, Octavia appears as a patron at the Sweet Snacks Café and gives a five-star rating on the Screech mobile app after being served by Pinkie Pie in Five Stars. In I'm on a Yacht, Octavia appears dancing by the pool area during a pool party on the Luxe Deluxe cruise ship.

In Forgotten Friendship, Octavia appears in a yearbook photo. She later makes a background appearance holding a yearbook in front of the school.

In Rollercoaster of Friendship, Octavia makes cameo appearances ordering a drink from Bulk Biceps at the Canterlot Mall juice bar and later in the audience for the Equestria Land light parade.

In Spring Breakdown, Octavia makes a cameo appearance as a passenger aboard the Luxe Deluxe spring break cruise standing by the pool and talking to Lyra as they are being served drinks by a ship employee.

In Sunset's Backstage Pass, Octavia appears standing in the security line to the Starswirled Music Festival with DJ Pon-3 on the first day of the festival and in subsequent time loops of the first day.

In the segment "Dashing Through the Mall", Octavia makes a cameo appearance standing in line in front of a pet store at the mall with DJ Pon-3. In the segment "O Come All Ye Squashful", she exchanges holiday cards with DJ Pon-3 while sitting on stairs at the school.

In the My Little Pony Annual 2013 comic, Octavia appears as a student of Canterlot High and a member of the jazz club.

In the novelization of Rainbow Rocks, The Mane Event, Octavia has a line of dialogue in chapter 17 slightly different from her line in the film.

An Equestria Girls doll of Octavia Melody, displayed at the 2014 American International Toy Fair, was released in the Rainbow Rocks toy line with a brushable toy of her pony counterpart.[1]

"I am a classically trained musician. It should have been me!"
— My Little Pony Equestria Girls: Rainbow Rocks - The Mane Event 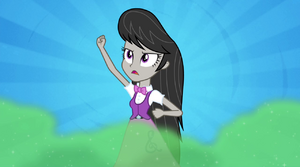