Once Upon a Zeppelin

Once Upon a Zeppelin[note 1] is the twenty-second episode of season seven of My Little Pony Friendship is Magic and the one hundred and sixty-fifth overall.

In this episode, Twilight Sparkle and her family's cruise vacation is actually a themed vacation where ponies have paid for the privilege of spending time with her, and she must please both her family and the cruise attendees.

This episode was originally scheduled to premiere on Canada's Treehouse TV channel on June 25, 2017,[1] but was later replaced by a repeat of A Royal Problem. The episode aired on Treehouse TV on October 7, 2017 at 10:55 AM EST, thirty-five minutes prior to its premiere on Discovery Family.[2]

The episode begins at the Castle of Friendship where Twilight Sparkle is filling out tall stacks of tedious paperwork. As Spike brings her a writing quill to replace the one she broke, he suddenly burps up a letter from Twilight's parents saying they won a family cruise on a zeppelin. Twilight wishes she could join them but resigns herself to doing her princess duties. Spike, having the opinion that even princesses need a break, insists that Twilight go on vacation with her family while he takes care of her paperwork.

The next day, Twilight, her parents, Shining Armor, Princess Cadance, and Flurry Heart board the zeppelin at the Canterlot docks. Once aboard, the cruise director gives the passengers a loud and assertive welcome via the P.A. system. Though Twilight's parents are excited and pleased to have won a free family vacation, they mention that they don't recall entering any contests, raising Twilight's suspicions.

Nonetheless, each family member has an activity to look forward: a bingo competition for Night Light, boat races for Shining Armor, princess daycare for Cadance and Flurry Heart, Neighagra Falls barrel-jumping for Twilight Velvet, and everyone watching the Northern Stars together when the zeppelin passes through the Frozen North for Twilight.

Cruise of the Princesses

The cruise director announces a tour on the zeppelin deck, and Shining Armor quickly succumbs to airsickness. As the zeppelin passes over several Equestrian locations, the cruise director mentions some facts about Princess Twilight—some of which are factually incorrect. In addition, Twilight and her family notice the other passengers staring at them, taking pictures of them, and wearing merchandise with their likenesses.

When Twilight goes to the cruise director's cabin to complain, she discovers that the director is Iron Will, who has taken up organizing themed vacations as a new career after the assertiveness seminar market dried up. As it turns out, the vacation that Twilight's parents won is actually a themed vacation for ponies to spend time with Princess Twilight and Princess Cadance. In the Sparkle family's cabin, Twilight grumbles at Iron Will for his less-than-honest business practices, but Iron Will argues that everything about the vacation was outlined in the consent forms that Twilight's parents signed.

Iron Will offers to cancel the cruise for Twilight but mentions how disappointed the other passengers will be. At the risk of also disappointing her vacation-craving family, Twilight agrees to Iron Will's activity schedule as long as her family gets to enjoy themselves. As part of the cruise's grand prize raffle, a colt named Star Tracker wins a day of being an honorary member of Twilight's family.

Being a good princess

Throughout the day, Twilight oversees the activities that her family members take part in, including her father's bingo competition and Shining Armor's paddle boat race. Unfortunately, since she is the focus of the princess-themed cruise, Twilight is unable to participate in the activities with her family, and the awkward Star Tracker stands uncomfortably close to her the entire time.

When Twilight checks in on Cadance at the daycare, Cadance worries that she is overworking herself too much to enjoy her vacation. Twilight assures her that she doesn't mind and that she'll be satisfied as long as she gets to see the Northern Stars with her family. After an "Alicorn Q&A" session runs on longer than scheduled, Twilight misses the chance to go barrel-riding down Neighagra Falls with her mother. Velvet suggests that Twilight take a break from her princess cruise activities, but Twilight says she's fine as long as her family is having fun.

Twilight's last princess activity for the day is signing autographs for the cruise attendees, but this also runs on long, well into the evening. When she sees lights in the night sky, she runs to the front of the deck and is horrified to learn that her family watched the Northern Stars without her. Because she missed out on the one cruise activity she was looking forward to, Twilight breaks down in sadness and frustration, and she ends up stepping on Star Tracker's hoof and exploding at him in anger.

Cadance finds Twilight sulking by herself, and Twilight says she only made a deal with Iron Will to make her family and the cruise attendees happy. Cadance tells her sometimes ponies want more from a princess than she's capable of giving and that Twilight has just as much of an obligation to herself as she does to others. Back in the Sparkle family cabin, Twilight admits fault to her family that she should've asserted a desire to do the things she wanted sooner, and she apologizes to Star Tracker for lashing out at him.

"What do you say we do something off the schedule?"
— Twilight Sparkle

Twilight, her family, and honorary family member Star Tracker enjoy ice cream at the front of the deck. When Iron Will announces ice cream with Princess Twilight to the other cruise attendees, Star Tracker tells him to leave Twilight alone. Twilight makes her own announcement to the attendees that, while she's more than happy to spend time with them, she just wants to relax with her family. The cruise attendees respect Twilight's wishes and get mad at Iron Will for his sneaky business scheme. With the passengers turned against him, Iron Will jumps overboard with a parachute and declares "No refunds!"

Because Twilight missed out on the Northern Stars, her family puts together a reenactment of the astral phenomenon—with Velvet, Shining Armor, and Flurry Heart dressed as stars. As Twilight joins them for a family group hug, the zeppelin flies back toward Canterlot.

Spike: You need a vacation! I can keep track of the friendship log, boost community morale, and answer fan mail for a few days.
Twilight Sparkle: But, Spike, you're as much a part of my family as anypony. I can't just leave you here to do all that work.
Spike: [loudly] What?! I can't hear you! You're on vacation!

Twilight Sparkle: You don't know where this prize came from?
Twilight Velvet: When somepony offers you a free vacation, you just sign the paperwork and don't ask questions!

Iron Will: You can call Iron Will "Iron Will"!
Twilight Sparkle: [gasps] What are you doing here?

Iron Will: Iron Will outlined all the details of the cruise in the Prize Acceptance and Consent Form that you signed.
Twilight Velvet: Well, when somepony offers you a free vacation, who reads the fine print?

Star Tracker: Twilight is my favorite time of day. [laughs] And it's also your name. [laughs] So I just thought that was cool.

Twilight Sparkle: Are you sure you're not airsick, big brother?
Shining Armor: [queasily] No way. How can I be airsick? I'm in the water, so it totally cancels out! [gurgles]
Twilight Sparkle: I don't think that's how it works.

Twilight Sparkle: The cruise ponies are happy. My family is happy. Even Iron Will is happy. You know who isn't happy? Me!

Princess Cadance: Sometimes ponies want more from a princess than you can give, and it can be hard to know where to draw the line.
Twilight Sparkle: You seem to know pretty well.
Princess Cadance: Once I had Flurry Heart, the line was easier for me to see. You will always have obligations as a princess, but you also have an obligation to yourself.

Twilight Sparkle: What do you say we do something off the schedule?
Everypony else: [gasps]
Star Tracker: Who are you?

Shining Armor: He may be pushy and manipulative, but nopony can say that minotaur isn't prepared. 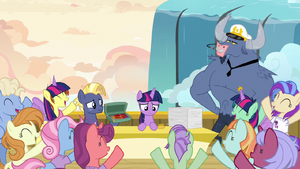 Once Upon a Zeppelin image gallery