One Bad Apple is the fourth episode of the third season of My Little Pony Friendship is Magic and the fifty-sixth episode overall. The title is a reference to the proverb, "One bad apple spoils the bunch", which was previously said by Granny Smith in The Super Speedy Cider Squeezy 6000.

In this episode, Babs Seed visits Ponyville and Apple Bloom wants her to be a Crusader; but things take a turn for the worse when Babs decides to join Diamond Tiara and Silver Spoon instead.

On October 18, 2012, EW.com published an article stating that an upcoming installment of the show deals with the issue of bullying, quoting show head writer Meghan McCarthy that "[It] explores how you should handle a bully, and sometimes what the source of bullying is," and that "It's wrapped in a story that's really fun and funny, and has music, and doesn't feel heavy-handed."[3]

Cindy Morrow, the writer of the episode, revealed that the original working title for the episode was "Bully For You".[4][5]

The version of the episode shown on Hasbro.com includes a brief additional sequence at the beginning of the episode. During this sequence, the following text is displayed:

Then a testcard is very briefly shown, and the episode subsequently begins.[6][7]

The episode starts out in Sweet Apple Acres with Apple Bloom worrying about what to wear to pick up her cousin, Babs Seed, at the train station. As time passes by, Apple Bloom starts overreacting and keeps trying on more outfits; finally Applejack tries to drag her along out of the house and to the train station. Apple Bloom, however, manages to escape and continues to search for the right outfit. Then, Applejack states that both Apple Bloom and Babs have something in common; neither pony has a cutie mark. As soon as she hears that, Apple Bloom rushes out of the house to have Sweetie Belle and Scootaloo welcome Babs Seed together with her.

Apple Bloom brings along Sweetie Belle and Scootaloo to try and persuade Babs Seed to join the Cutie Mark Crusaders. When Babs arrives at the train station, Apple Bloom rushes up to her and introduces herself and the other members of the CMC. Babs looks overwhelmed and nervous. Scootaloo tells her that they have a big surprise for her, and covers Babs' eyes with her hooves. Later, she takes them away to reveal the Cutie Mark Crusaders' clubhouse. Sweetie Belle and Scootaloo act out the "highlights" in the clubhouse while Apple Bloom narrates the tour, Babs following along.

Recognizing Babs as a bully, Sweetie Belle suggests they tell Applejack. However, with Babs threatening retribution if they do so, Scootaloo and Apple Bloom think otherwise. After a song presenting the many different situations where Babs victimizes the Crusaders, the CMC return to the clubhouse. Upon discovering that Babs, Diamond Tiara, and Silver Spoon have occupied the clubhouse, Sweetie Belle bursts into tears.

Once again, Sweetie Belle suggests they talk to Applejack, but Apple Bloom diverts this by saying they need to fight back. She plots that they should make Babs the guest of honor at the Summer Harvest Parade. In order to do so, they secretly make a booby-trapped float the night before. Working in the small hours of the morning, they cover the basic frame of a float with paper taken from Carousel Boutique and cover the apple-shaped float with luster dust, a golden powder intended for use in cake decorating.

As the Cutie Mark Crusaders are preparing to ride the float in the parade, Babs Seed, Diamond Tiara, and Silver Spoon come up to them. Babs is immediately blown away by the large golden apple float. Sweetie Belle asks, "Isn't it smashing?" Realizing that the word "smashing" could invoke violence, she begins stuttering, but Scootaloo cuts her off. Diamond Tiara and Silver Spoon roll their eyes and walk away. Scootaloo warns Babs, telling her not to even think about riding the float, and that she had her chance. Apple Bloom elbows Sweetie Belle, and she leaps into the float to hit the switch to turn it on.

After turning the float on, Sweetie Belle sets the kitchen timer with a devious grin. As she is doing that, Apple Bloom drags a mattress and positions it next to the float. Babs sees this as an opportunity to take the float, which she does. She shoves the CMC out of the way as they prepare to step into the float. She yells, "See ya later, Cutie Mark Crybabies!" and drives off. The CMC get up declaring that stealing the rigged float will teach her to not mess with the CMC. Suddenly Applejack appears, delighted that the CMC are letting Babs ride the float. Apple Bloom agrees, stating that they thought she should be the center of attention. Applejack praises them for their "good" deed and making Babs feel special after all of the heartache she had in Manehattan. The CMC, who are in anticipation of the upcoming disaster, stop, wide eyed. Applejack explains that she didn't say anything before because she didn't want to single out Babs. She then goes on, explaining that Babs had been getting teased constantly for her blank flank, and that she came to the farm to "get away from all of her problems back home." At that, the CMC wilt with a guilty look on their faces. Applejack hands them colorful balloons, then praises them one more time for their "good deed" before walking away. The CMC then realize that Babs was bullying them only to avoid being bullied herself like she was in Manehattan. Desperately, the CMC try to find a way to stop the float from tumbling off the edge of the nearby cliff. They rush over to Applejack, and try to explain what they did, but their voices are drowned out by passing instruments in the parade.

By riding on Pinkie Pie's lettuce float, the CMC gather up enough speed to catch up to the golden apple float before it descends down the cliff and into muddy water. Scootaloo saves Babs by pushing her out of the driver's seat of the float, and the CMC end up falling into the mud at the base of the cliff instead.

When the CMC are washing mud off themselves back at Sweet Apple Acres, Babs expresses her astonishment that the CMC saved her. The CMC regretfully explain how they booby trapped the float in order to get back at her, and became bullies themselves in the process. The CMC and Babs apologize to each other and resolve to "start over." The scene changes to the clubhouse, where Sweetie Belle is reading from a scroll on a podium. The CMC swear in Babs as a new member of their club. Before returning to Manehattan, Babs promises to tell her big sister about her own bullies and to start a Manehattan branch of the CMC. When Diamond Tiara and Silver Spoon come around, she revokes their friendship in defense of the CMC, exclaiming, "That's not how you talk to my friends!" She then threatens to tell Diamond Tiara and Silver Spoon's mothers about their attitudes. They fearfully back away and fall in the mud. Babs then gets on the train and departs from Ponyville to her home.

Sweetie Belle: I'm just so excited I could burst!

Sweetie Belle: And we figured out you were just doing it to avoid getting picked on in Ponyville. But, by then... we were the ones being bullies. And... Oh, why does life have to be so ironic?!

Sweetie Belle: Sure gonna miss that bad seed.
Applejack: Bad seed? I thought y'all were friends now?
Sweetie Belle: No, see, first we called her 'bad seed' as in actually a bad seed, but now she's bad as in good. Get it?
Applejack: Yea- no.
Cutie Mark Crusaders: [laughing] 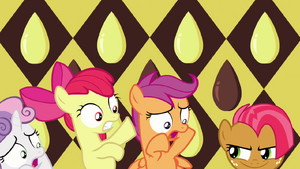