Opalescence, or Opal for short, is Rarity's pet cat. She is introduced in the episode Suited For Success.

According to Lauren Faust, "Opal Essence was originally [named] Ruby",[1] "and about 5 other names in between", according to Andrea Libman.[2] The name was changed because most of those gemstone names were legally trademarked for toys.[3]

Opalescence looks like a typical Persian cat, with white fluffy fur, a wide face, and shortened muzzle. She wears a purple opal-studded collar around her neck, and a purple ribbon on the top of her head. Opal's scenes are sometimes accompanied by harpsichord music, for example when she luxuriously curls up on a roll of cloth in Suited For Success.

She is irritable and often yowls and hisses at her owner Rarity and other ponies, but not at Fluttershy. She is pleasant enough in the park with Rarity on their pony-pet-playdate in May the Best Pet Win!. Opal exhibits a sort of fashion sense; in Suited For Success, she happily rubs herself against the dresses that Rarity designs for Rarity's friends, but shows disgust at the dresses that the friends custom-order. In Sweet and Elite, Opal reminds Rarity of Twilight Sparkle's incomplete dress by impatiently tapping on Rarity's design sketchpad.

Opalescence first appears in the beginning of Suited For Success. Rarity thanks Opal for her assistance and asks for her advice, while Opal seems bothered and annoyed by being given things to carry and being carelessly flung off the fabric that she was sitting on. Rarity confides in Opal throughout the episode, but Opal only hisses and meows in return. When Rarity locks herself in her room after her failed fashion show, Rainbow Dash strands Opal in a tree to lure Rarity out of the room; Opal shakily hugs a branch while meowing in fear.

In Stare Master, she swipes and chops off a lock of Sweetie Belle's mane and offers a smug look after Sweetie Belle suggests that her special talent might be caring for animals. In Owl's Well That Ends Well, Spike takes Opal's toy mouse, which he uses as a ketchup-bloodied carcass to frame Owlowiscious for its murder.

In The Best Night Ever, Twilight Sparkle uses magic to turn Fluttershy's mice into stage horses so that they can travel to the Grand Galloping Gala. Opal thwarts their plan by pouncing on the mice-like horses, who gallop away.

In Sisterhooves Social, Rarity accidentally steps on Opal's tail, much to the cat's annoyance, and then dresses her in her favorite sweater that Sweetie Belle had shrunk earlier.

In May the Best Pet Win!, Rainbow Dash puts her prospective pets through a series of tests, one of which is a test for "guts". The applicants quake in fear when Rainbow Dash challenges them to take away Opal's favorite toy, a stuffed mouse. One of the contestants, a butterfly, successfully mesmerizes Opal and whisks away her toy. Tank, the tortoise, tries to trap Opal in her carrying case by flipping it over her, but she gets out of the way in time and fiercely scratches at his shell. Near the end of the episode, Tank does succeed in taking away the toy from Opal while she is busy scratching his shell.

Opal accompanies Rarity to Canterlot during her stay at Canterlot Castle in Sweet and Elite. Opal indulges in many of the royal city's splendors with Rarity, and when Rarity decides to create a new dress as a gift for Twilight's birthday party, Opal tries to keep her focused on her work. When Twilight Sparkle and the rest of the friends unexpectedly show up at Canterlot to host the party there, Rarity lies, claiming that she had to stay to take care of a "sick" Opal. Rarity hastily soaks an irate Opal in water to feign illness. Fluttershy gives the "poor baby" her usual tender love and care, hoping to make her "better".

In Too Many Pinkie Pies, Opal appears among the ponies and animals hiding in the woodland critters' tree home.

In Just for Sidekicks, Spike volunteers to petsit for her in exchange for a jewel (albeit a very minuscule one). Opal is shown to have many specifications for comfort, including needing to be kept at a constant 81.4 degrees of temperature. She is shown in this episode to now have something of a bond with Tank, as they nuzzle briefly upon seeing each other and Tank carries her through the air at different times. Opal also helps Tank to hide on the train when Spike, the Cutie Mark Crusaders and the other pets are trying to avoid detection by Rarity and her friends.

In season four, Opalescence appears in Princess Twilight Sparkle - Part 1 as the plunderseeds that attack Ponyville mess with Rarity's magic that causes Opal to fly around the room. In Maud Pie, Opal attends the pony-pet playdate when the Mane Six meet Pinkie Pie's sister Maud for the first time. In For Whom the Sweetie Belle Toils, Opal and Rarity eavesdrop on Sweetie Belle screaming in anger in her bedroom, and in Testing Testing 1, 2, 3, Opal portrays as Princess Luna on Fluttershy's play.

In season five, Opal appears in Do Princesses Dream of Magic Sheep? as Rarity grooms her at her boutique. Rarity, having not had enough sleep, accidentally pokes Opal's lower back with her comb. Opal also appears in Canterlot Boutique playing with her toy mouse. She gets offended when Rarity mistakes her for the mail pony.

In Flutter Brutter, Fluttershy employs Zephyr Breeze as Rarity's assistant and asks him to dye all of the fabrics. However, after seeing Opal play with the paint, he gets her to do all of it, resulting in a big mess.

In P.P.O.V. (Pony Point of View), Opal delivers a letter to Twilight from Rarity saying that she will not be able to attend Twilight's tea party. She also delivers Rarity a message from Twilight stating a friendship emergency.

In Fluttershy Leans In, Opal appears during Fluttershy's meeting with Dandy Grandeur. In It Isn't the Mane Thing About You, Opal shrieks at seeing the remains of Rarity's mane when Applejack, Rainbow Dash and Fluttershy struggle to give their honest opinions on it, and later sits on Rarity's couch when all of Rarity's friends comfort her.

In Rainbow Roadtrip, Opal appears in the opening song with the same name, who is accidentally packed in Rarity's bag before she leaves for the Rainbow Festival in Hope Hollow.

In She's All Yak, Opal appears during Fit Right In as a potential new hairstyle for Yona. In The Last Problem, Opal briefly appears in Rarity's group shot during The Magic of Friendship Grows.

In Pet Project, Opalescence has her picture taken alongside the rest of the Mane Seven's pets. In Leaping Off the Page, she briefly appears in the same picture in Rainbow Dash's bedroom.

In My Little Pony Equestria Girls: Forgotten Friendship, Opal appears on Rarity's bed in Wallflower Blush's memory of removing Rarity's good memories of Sunset Shimmer while Rarity sleeps. As it happens, Opal yowls and jumps off the bed.

In the Better Together short "DIY with Applejack", Opal appears to make some "suggestions" about how Applejack should improve Rarity's dressing room (such as hissing when Applejack suggests painting it a "practical" brown color). She also appears at the end of the short on top of a sleepy Rarity. In FOMO, she appears in Rarity's room attending a surprise birthday party for her owner. In Camping Must-Haves, Rarity shows off a privacy screen with a large image of Opal as a must-have for camping at the music festival. Opal herself later appears on a hypoallergenic pillow as another must-have Rarity introduces.

Opalescence appears on page 3 of My Little Pony Micro-Series Issue #3. A bowl can be seen with the letters "Opalescens".

Opalescence appears in All About Alicorns, in a photograph in Nightmare Night, and in The Magic of Friendship.

Opalescence appears in all three episodes of Rarity's Peek Behind the Boutique.

OPALESCENCE, or Opal for short, may seem fluffy and sweet, but that's only when she's manipulating her owner, Rarity. This feisty little kitty has been known to hiss when she doesn't get her way!

Rarity's cat, OPALESCENCE, does whatever she wants. Most days she's too tired to care. Get too close and she might even hiss! Despite her catitude, Rarity loves her cuteness nonetheless.

Opalescence will be appearing in My Little Pony: Pony Life.[4] 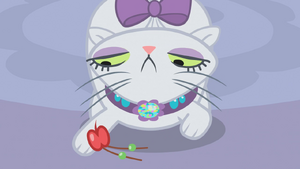